Franchon Crews-Dezurn, Yokasta Valle and Other Fight News
Written by: David A. Avila 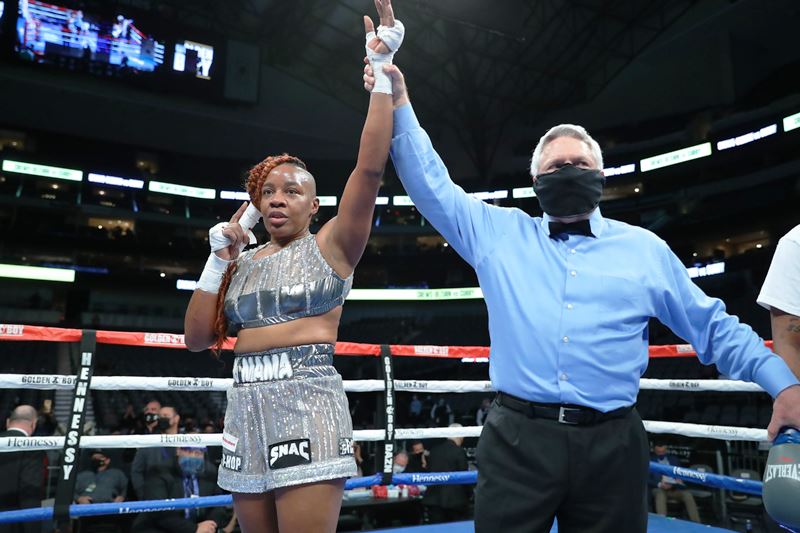 Franchon Crews-Dezurn Returns to Form and Other Female Fight News

Welcome to the world of female prizefighting.

A year ago, rumors of a deadly virus were emerging. It’s here and still doing damage worldwide. But the women continue to thrive slowly but steadily despite the cancellations and changes in protocol.

World champion Franchon Crews-Dezurn (7-1,2 KOs) returned last Saturday on a Golden Boy Promotions boxing card in a non-title defense against Ashleigh Curry (8-14-4) at Dallas, Texas. In front of more than 6,000 fan she won an eight-round decision.

During the fight she showed improvement in her defense and a varied attack. Her punches were more strategically placed against the taller and heavier Curry, a veteran of wars against several world champions and contenders.

The previous time Crews stepped in the boxing ring she in a close struggle against Mexico’s Alejandra Jimenez whose drug tests revealed traces of PEDs. The fight result was later ruled No Decision and the belts were returned to the Maryland-based fighter.

Crews, the current WBO and WBC super middleweight titlist, fought above 175 pounds in this recent fight to get action and shake off the mounting rust of inactivity. Next for the Baltimore prizefighter will probably be a unification clash against Sweden’s Elin Cederroos who holds the IBF and WBA super middleweight titles.

A unification match against Cederroos is very makeable.

“For me a unification match and being undisputed will help me for my personal legacy,” said Crews-Dezurn. “Its inspiring. l believe I’m the best. If I’m not, I have the potential to be.”

It means that taking risks does pay off. Back in 2016 Crews willingly made her pro debut against Shields who was also making her debut. People often forget this. Both had fought each other as decorated amateurs and knew each other’s talent. Yet they willingly accepted to fight each other.

I’ve been covering prizefighting for 35 years and never witnessed a pro debut as violent and competitive as Shields and Crews produced on the under card of Andre Ward and Sergey Kovalev’s first encounter in Las Vegas. It was shocking and impressive. Imagine if Devin Haney had fought Ryan Garcia in their pro debuts.

Change of foe for Yokasta Valle

IBF world titlist Yokasta Valle will now be fighting Sana Hazuki on January 16, in Costa Rica. Japan’s Hazuki is the number one contender according to the IBF rankings.

WBC titlist Tina Rupprecht pulled out of a unification clash against Valle when her promoter allegedly tried to change the terms of the contract. Rumors have it that Rupprecht’s promoter wanted to stack the judges in her favor.

When Valle fought Rupprecht back in 2018, the judges in Germany scored several rounds 10-10 instead of giving them outright to the Costa Rican when they fought in Munich. Lately, the WBC has been egregious in its behavior.

Valle happens to be one of the most daring of champions and has willingly traveled to Japan, Germany, Spain, Panama and El Salvador. As most in boxing know, traveling to other countries and getting a favorable decision is a very tough task. Yet, Valle has repeatedly shown no hesitation in accepting the challenge. She is a real fighter who believes in her talent.

Despite only weeks to prepare Hazuki steps in to replace Rupprecht and compete for the IBF minimum weight world title in Costa Rica. It’s no surprise that the Japanese fighter eagerly accepted the fight. Japanese fighters are always prepared and willing to fight in any country. They are very professional in their approach.

On Saturday Jan. 16, minimum weights Yokasta Valle (20-2) and Sana Hazuki (8-4-1) meet 10 rounds for the IBF world title at San Jose. Hazuki is ranked the number one contender by the IBF.