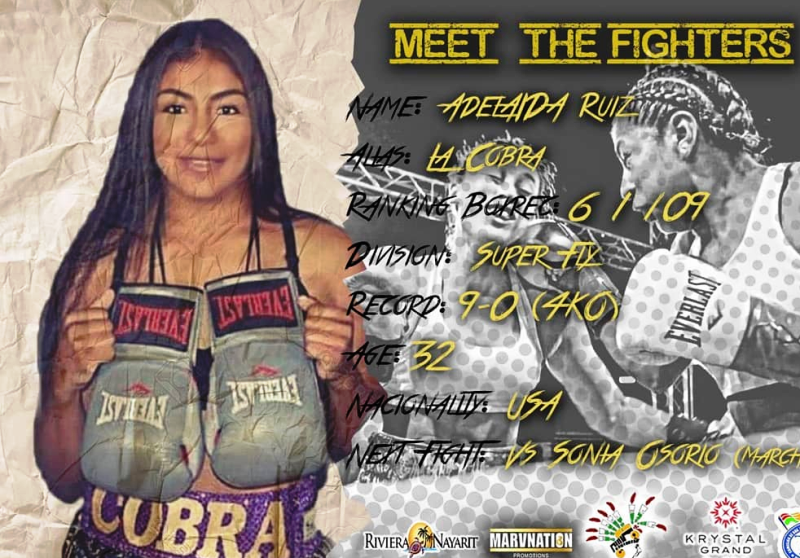 Sometimes in boxing an individual might have to wear different hats.

One of the major differences between prizefighting and the rest of the sports is that one might start off as a boxer but end up as entirely something different once their days inside the ring have ended.  Some of them have gone into the commentating booth while others have become referees or part of commissions.  Many of them have become trainers in the second half of their careers while others try their hand at promoting.

Southern California’s Cesar Garcia has dabbled in many different facets of the sport.  Starting off as a fighter, once that chapter closed, he moved on to managing fighters and now is throwing his hat into the promotional ring with his company Grito de Guerra Promotions.

“I have never been a trainer but maybe one day,” Garcia said of his past in the sport in an exclusive interview with the 2-Minute Round, the all-female boxing podcast.  “Maybe you are looking into the future, who knows?”

According to Garcia, his transition from managing fighters to actually promoting a fight card was seamless and the next logical step.

“I’ve been managing guys for some time now and I am very familiar with a lot of promotors,” Garcia explained.  “They know me and they know what I do but some people think that just because I know them, I can get my guys on any card I want and that is not the case.  It is not that easy to get guys fights so I needed to figure out a way to get my guys fights.”

“I did some promotions in Guadalajara and I actually teamed up with ‘Canelo’s’ [Alvarez] brother on a few of them,” he said.  “I just did a co-promotion in Tijuana and I’m just getting a pretty nice deal with a hotel chain in Riviera Nayarit.  That is where it led.”

The scheduled ten-round fight headlines a fight card at the Krystal Grand Hotel in Nuevo Vallarta, Mexico.  The fight card will be televised in the United States on PPV and broadcast locally in Los Angeles on tape-delay some days later.

It can be seen on this pay-per-view link: https://www.fightsnight.com/adelaina-cobra-ruiz.html

“I was never a huge fan of women’s boxing for no other reason than I didn’t think the skill level was one I really enjoyed,” Garcia said of his past thoughts of the sport.  “MMA was a little farther along as far as skill level.  I then started watching this girl, Adelaida Ruiz, and that girl is awesome.  Ever since I have been paying attention a little bit more to women.  Their skill level definitely has picked up in these last few years.”

“Women don’t come to feel each other out, they come to fight,” he continued.  “All the fights are always great; they are always action packed.”

Known as tough, skillful, and hard punching, Ruiz’s story is an interesting one.  She began boxing like many do in her early teens traveling all over the southwestern United States competing in amateur bouts.  By her late teens she had left the sport to start a family.  After three children, she didn’t want to live the rest of her life with the “what if” question hanging over her so she decided to turn professional in 2017.  Four years later, she is now looking to capture her first world title.

“I would love to assume that,” Garcia stated when asked if with a Ruiz win in her next fight it would lead for her to sign with Grito de Guerra Promotions.  “We haven’t taken it past this fight.  I know as a promotor is not the smartest move.  She has great potential.”

Grito de Guerra Promotions is planning to have a busy 2021 with a four-fight card agreement with the venue in the western Mexican state of Nayarit.  “We had to push this one back a little bit so I don’t know if we can do the four this year but three, absolutely.”