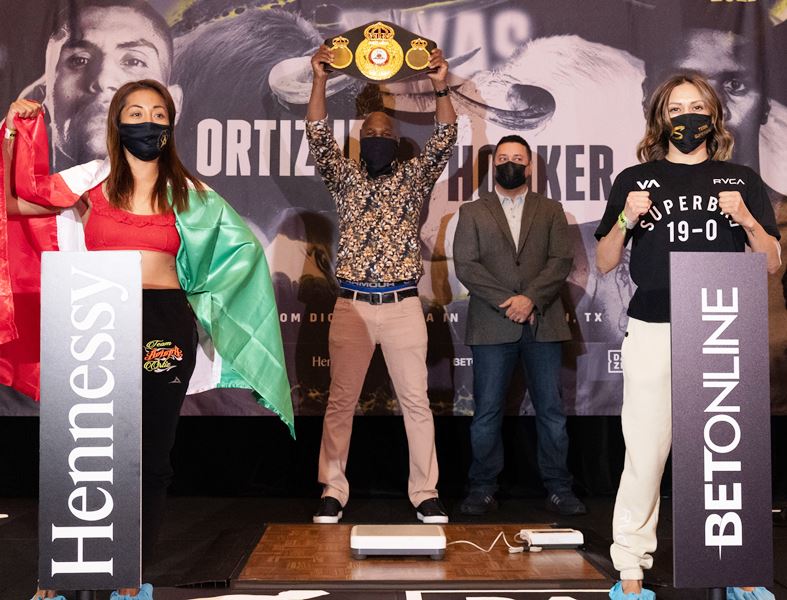 Estrada finally enters the boxing ring with a shot at an actual world title belt opportunity. It’s been decades in the making.

“It’s a dream come true. It’s something I dreamed up as a little girl to be on a huge platform and on Golden Boy Promotions,” said Estrada, who trained in various gyms in East L.A. neighborhoods for decades.

Mexico’s Ortiz has gripped the WBA title for eight years with 12 world title defenses against all-comers. The last time she tasted the bitter words of defeat took place nine years ago in Buenos Aires, Argentina. She’s considered the best in her weight class.

“I’m motivated to show Mexican fighting in the U.S.,” said Ortiz, 34, who has been fighting professionally for 14 years against many of the best female fighters of the world.

It’s a vast amount of experience.

Estrada feels more than ready for the champion.

“I know she has the pro experience, but I have the amateur experience with over 108 amateur fights,” said Estrada, 28, who has been in boxing since eight years old.

In boxing the country of Mexico has long been a hotbed for developing prizefighters. It produces champion after champion with machine-like speed. Since the late 1990s it has shot out female champions like Mariana Juarez, Ana Maria Torres and Jackie Nava. You can include Ortiz among the recent group of Mexican warriors.

Mexico City continues to be home for more world champions than any other city in Mexico.

Meanwhile, during the last 25 years, the Southern California region became the capital of boxing with the arrival of more than 100 gyms springing up. From San Diego to Santa Maria, kids flocked to their youth centers and garage-style gyms to learn the craft of fighting. Pro fighters from all parts of the world keep arrive everyday to spar with some of the best talent based in Hollywood, Indio, Big Bear, Riverside and in the boxing bastion of East Los Angeles. Several notable world champions hail from “East Los” including Oscar De La Hoya and Leo Santa Cruz.

Estrada grew up a tiny figure under the age of 10 who successfully battled her way through strong amateur tournaments in East L.A. to find equal success as a pro. She and her team that consists of trainer Dean Campos and father Joe Estrada prefer to win a world title the right way and in front of a large audience.

“I was offered world title fights when I was 4-0 and 7-0, but my team didn’t want that. It was for little money and in front of nobody. It didn’t make sense,” said Seniesa Estrada who also played baseball as a youth. “Now it’s finally the right time.”

De La Hoya and his team at Golden Boy Promotions witnessed the relentless ascent of Estrada and her success has convinced them of the future of women’s boxing. They have signed multiple female fighters and currently have a world champion in Franchon Crews-Dezurn who holds the WBC and WBO super middleweight world titles.

“Women’s boxing is on the rise and here to stay. It’s only going to get bigger and better. I strongly feel this fight has the potential to steal the show,” said De La Hoya during the press conference. “In women’s boxing they literally give it their all.”

“Always I say that I prepare for each fight like I am the B side,” said Ortiz whose nickname means the Wasp in Spanish. “A fight is a fight. But I’m coming to show what is mine.”

For many years what has been in Ortiz’s vice grip possession has been the WBA minimumweight world title. A dozen foes have been vanquished trying to topple the Mexican fighter’s reign.

None were from East L.A.

“This is perfect timing,” says Estrada who has battle on the big stage in Las Vegas with millions watching before. “Ortiz is a tough fighter who comes to fight. I need to make her uncomfortable and get her out of her comfort zone.”

The world title bout between Estrada and Ortiz are the co-main event.

“Seniesa is a fighter that gives it her all. She has a dream of becoming the greatest, the best. I love the fact she come from East L.A. like where I come from is amazing,” said De La Hoya. “Anabel is incredible as well.”