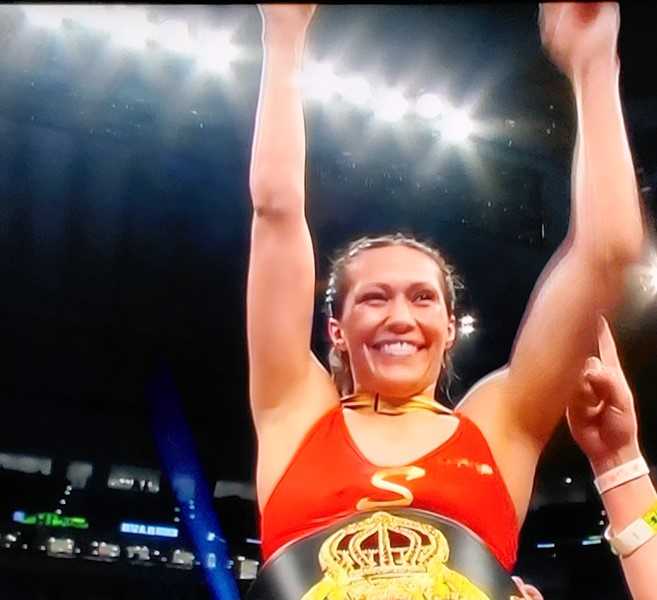 After 10 years of waiting her turn, East L.A.’s Seniesa” Super Bad” Estrada got her chance and charged past Mexico’s Anabel “La Avispa” Ortiz with a near shut out performance to take the WBA minimum weight world title by unanimous decision on Saturday.

“I knew that this was my time,” said Estrada.

Finally fighting at her natural weight Estrada (20-0, 9 KOs) proved that 105 pounds was not a problem as she powered past cagey veteran Ortiz (31-4, 4 KOs) before an actual crowd at Dickies Arena in Fort Worth, Texas.

Even an eight-year reign as world champion did not help Ortiz from the Estrada monsoon.

Behind clever footwork and switching stances from orthodox to southpaw, Estrada kept Ortiz mostly in a defensive counter-punching mode. The usually offensive-minded Ortiz preferred the defensive tact in almost every round. It did not work.

“Our base plan was to continue to throw right hands,” said Estrada about her fight strategy.

She proved in every round that she was the quicker and more powerful fighter with strafing left hooks and rights that pummeled Ortiz’s face. The Mexican refused to wilt and fired right counters and check left hooks.

A crisp right cross sent Ortiz staggering along the ropes and to the floor in the second round. It didn’t look good for the champion Ortiz, but she battled her way out of trouble to continue the fight. She used well-timed counters to keep her opponent from over-running her.

Still, it didn’t look like Ortiz would be able to survive Estrada’s firepower.

Ortiz, who had beaten 12 consecutive foes attempting to topple her reign, just was not able to figure out a way to trip up the speedier and more powerful Estrada. She even hit Estrada after the bell on several occasions but couldn’t put a dent on the East L.A. fighters quick in-and-out attacks.

Perhaps the Mexico City’s best round took place in the sixth round as she planted herself and ferociously exchanged with the Southern California fighter and both connected. Despite three rocket left hooks and a three-punch combination by Estrada, the champion took the blows and delivered a counter right cross and a two-punch combination. Estrada connected with two left uppercuts to win the round anyway.

“I knew she was durable she hasn’t been stopped in a long time. She comes to fight and she comes in great condition,” said Estrada.

Ortiz was attempting to defend the title for a 13th time. But it was unlucky for her that Estrada was seeking her first world title. After 10 rounds Estrada was deemed the winner by unanimous decision 100-89 twice and 99-90 and the new WBA minimum weight world titlist.

“The difference is I’m able to show my strength and power in this weight class,” explained Estrada about dominating a long-time world titlist such as Ortiz. “Before Golden Boy Promotions, I was fighting over 112 pounds and girls even heavier than that.”

Now at a comfortable weight class, the first female fighter from East L.A. to win a world title says she is eager to unify world titles in different weight classes.