Amanda Serrano vs Daniela Bermudez : Battle of Pound for Pounders
Written by: David A. Avila 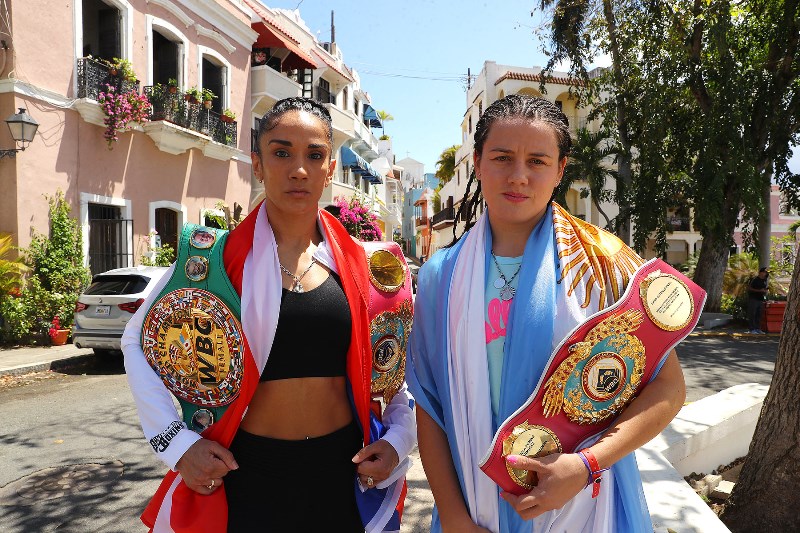 More than that. They’re fighting for bragging rights to who is mas macha.

“I’m not really surprised because I know how tough she is and wants to prove she belongs amongst the elite,” said Serrano about Bermudez.

Both Serrano and Bermudez have captured world titles in more than one weight class.

Bermudez, 31, has grabbed world titles in the super flyweight, bantamweight and super bantamweight divisions. She’s a boxer-puncher stylist who is aggressive and has not lost a fight since dropping a decision to fellow Argentine Yesica Bopp in 2014.

Thursday will be the second time Bermudez fights outside of her native country. Once before she ventured to Mexico City and dominated hometown fighter Mariana Juarez.

“I know that Amanda Serrano is one of the best pound-for-pound fighters but I will surprise her,” said Bermudez, 31, whose sister Evelyn Bermudez is also a current world titlist. “Coming from Argentina we always want to win.”

Since moving up in weight past 112 pounds, Bermudez has not lost a fight. She is relentless, fast and fires combination after combination.

Serrano, 32, has a record seven division world titles from super flyweight to super lightweight. The southpaw slugger has more knockouts than any female fighter today and recently stopped former world champion Dahiana Santana in the first round. Serrano is more than just a power-puncher, she uses a smooth pressure style behind combination punching to get into range. The Puerto Rican fighter loves challenges and expects one on Thursday.

“I know she is like me, a warrior, that loves to come forward and fight,” said Serrano while in Puerto Rico. “I’m ready for that type of fight and its the one I love.”

Over the years Serrano has challenged many of the best fighters in the world. Few have accepted her offers, mostly because of the firepower she possesses in either hand. It was a right hook that leveled Santana in less than one round this past December. But Serrano can also engage in technical affairs as she demonstrated against Heather Hardy and Mexico’s Yazmin Rivas.

“Not sure if (Bermudez) is as tough as Yazmin Rivas who I believe was my toughest opponent to date, but I’ll find out Thursday night,” said Serrano whose last defeat took place in 2012. It was by decision and was held in Sweden.

Since that loss, Serrano went on a tear and proceeded to knock out 22 foes including a demolition of Argentina’s Maria Maderna that took place in Buenos Aires and for the WBO lightweight world title.

It was during that venture to South America that she became aware of Argentine culture and its love for boxing.

“I can honestly say they are the classiest people ever. Both girls Maria Maderna and Yamila (Reynoso) are still my good friends,” said Serrano of her former Argentine foes who she defeated. “I think it’s their perfect Spanish that makes everything sounds so nice.”

Serrano doesn’t expect her battle with Bermudez to be a friendly affair once that bell rings.

“Daniela fights like me. Comes forward all-day,” said Serrano with a chuckle. “The question will be does she have my type of punching power? I’ll find out Thursday.”

It’s not often that you get two pound-for-pound fighters with real knockout power facing off.

Mucino suffered a leg injury that took her out of action for almost two years. She has formerly held the WBO, WBA, WBC and IBF flyweight world titles on separate occasions.

Speaking of smaller weights, this past Saturday we saw the present and the future of the little giants of women’s boxing as Seniesa “Super Bad” Estrada blitzed longtime WBA minimumweight champion Anabel “La Avispa” Ortiz. It was Estrada’s first world title though she is 28 and undefeated.

Estrada could have become a world champion years ago but felt the lack of exposure made it necessary to wait for the proper time. Her last three fights have resulted in massive exposure and now she is the WBA minimum weight world titlist. She is also the first female fighter from the unincorporated town of East Los Angeles to win a world title, a tiny region famous for developing world champions.

Now Estrada can add her name to the list that includes Leo Santa Cruz, Joey Olivo, Art Frias, Richie Lemos, Solly (Garcia) Smith, Sergio Mora and of course her boss Oscar De La Hoya.  She is the only woman on the list.

Elena Saveleva (6-1) won by unanimous decision after eight rounds versus Olga Gurova (2-1) on Saturday March 20. The featherweight bout was held at Moscow. Also, Luiza Davydova (4-2) stopped Anastasia Kruzhkova (0-1) in the fifth round of a super welterweight bout.

Simangele Hadebe (8-3-2) was the winner by unanimous decision after eight rounds versus Melissa Miller (5-10-3) on Saturday March 20. The bantamweight bout was held at Secunda.

Yoselin Fernandez (10-0) knocked out Endrimar Pirona (1-16) in the third round on Friday March 19. The light flyweight fight took place at Caracas.