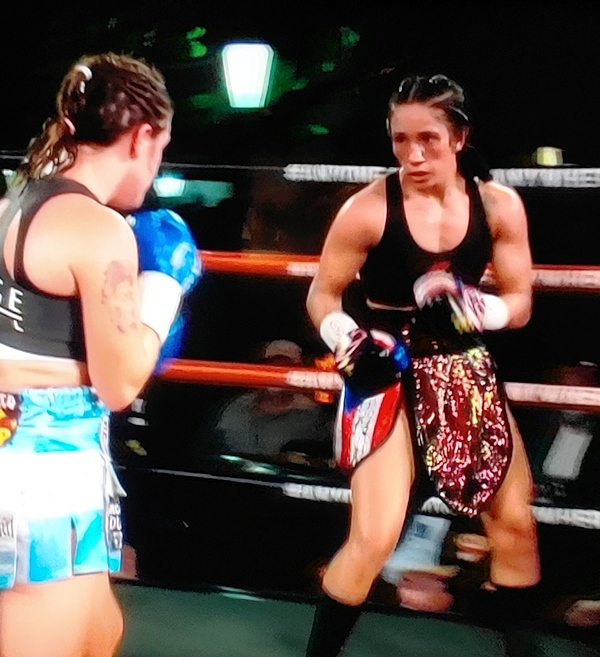 Amid a beautiful beachfront setting Amanda Serrano made sure it was no paradise for Daniela Bermudez and stopped her by knockout in a battle between top pound for pound fighters on Thursday.

“We knew she was tough. She’s Latina. She’s from Argentina. We know that Argentines are very tough women. We were ready for it,” said Serrano.

Serrano (40-1-1, 30 KOs), a seven-division world titlist, accepted the challenge from Argentina’s Bermudez (29-4-3, 10 KOs) for the WBO, IBO and WBC featherweight titles and showed the limited crowd at Plaza del Quinto Centenario in San Juan, Puerto Rico, she indeed is the “Real Deal.”

Each fighter entered the ring with reputations at stake as two of top fighters in the female fight world. Each also realized that the world would be able to watch the beachfront spectacle and bragging rights were the prize.

Immediately Serrano took the lead behind a jab while circling right. Bermudez took a moment to gauge the Puerto Rican fighter’s movements and power. Serrano connected with a right uppercut and hooks. Bermudez countered with consecutive rights. Neither seemed fazed by the early exchange.

“I knew I was going to be able to walk her down. I’m a lot bigger than her and a lot more power,” said Serrano about Bermudez who was fighting at featherweight for the first time in her lengthy career.

In the second round Serrano stepped up the tempo and showed off her abilities to slip and counter. Bermudez moved in fired away but was unable to find a groove. Serrano slipped under, moved to the side and unleashed accurate counters. In the last 30 seconds Bermudez unleashed a three-punch combination and was met with a stiff left to the body by Serrano. It was a telling blow.

Neither fighter took the lead in the third and both fighters paused their attacks. Serrano demonstrated she was able to land from far with a lead left cross and a stiff jab. Bermudez fired a jab and was met with a left cross to the body. Bermudez fired a one-two combination at the end of the bell. It seemed apparent that Bermudez looked to end each final 30 seconds with an attack.

“I expected it. I knew she was a tough fighter,” said Serrano who prepared in Brooklyn.

Bermudez seemed unable to switch gears while Serrano varied her attack. A jab by Bermudez in the fifth round followed by a left hook seemed to signal a change in momentum, but Serrano opened up with a left to the body and a three-punch combination capped by a right hook.

The face of Bermudez showed concern in between rounds and it also showed swelling and redness from the incoming blows. Still, Bermudez never seemed severely hurt by Serrano’s blows to the head.

Bermudez, a three-division world champion, did not become a multiple world titlist by quitting. She attempted to stand her ground and slug it out with the powerful Puerto Rican fighter. And she was able to match blow for blow except when Serrano connected with body shots. That slowed Bermudez every time.

By the eighth round it was seemingly apparent that Bermudez was far behind on the score cards. She gutted it out and was landing blows but then Serrano fired a right hook to the body and a left hand to the head and that sapped the energy from the Argentine fighter.

Bermudez needed a knockout to win in the ninth round. She connected with a right cross but was met by a body shot. Bermudez re-ignited her attack and was met with a perfect counter left cross from the Puerto Rican fighter. Bermudez attacked again but Serrano slipped under and connected with a left to the body and a right to the body. Bermudez’s face seemed in a frozen state of shock and she turned away and went down on both knees. She looked at her corner and shook her head as the referee counted her out by knockout at 1:33 of the ninth round.

“I knew I was hurting her, her hands were dropping. My corner told me two hooks to the body and that’s what happened,” said Serrano who became the only fighter to defeat Bermudez via knockout. “My knockout came in the ninth which shows I have power till the very end.”

Serrano had knocked off a pound for pound fighter.

When asked about her future plans, Serrano was decisive with an answer.

Of all the seven division world titles Serrano has conquered, featherweight seems to be her best. She was dominant.

Mexico’s Arely Mucino (29-3-2) returned to boxing after a near two-year layoff due to injury and was victorious over Lucia Hernandez (7-11) by unanimous decision after eight rounds in a super flyweight bout.