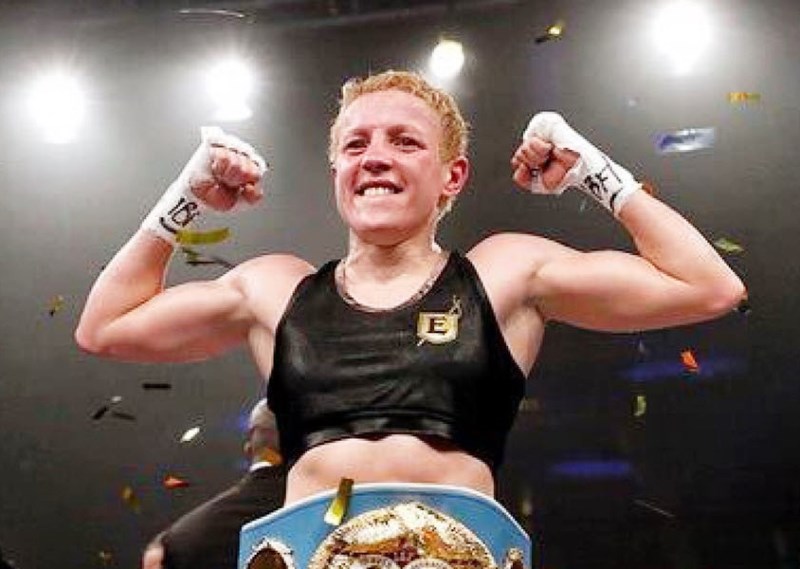 One of the hottest topics in women’s boxing involves an intriguing series of potential contests between the top super-featherweight titlists, to unify the most prestigious of those championships.

France’s Maiva Hamadouche wants to prove she’s the best of that elite fight club. It’s no stretch to say the 130-pound division, which includes England’s Terri Harper, Mikaela Mayer of the USA, and Hyun Mi Choi from South Korea comprises one of the most talented constellations in the sport.

Though 31-year-old IBF titlist Hamadouche (22-1,18 KOs), may be the only boxer in that group not still undefeated, she’s also quite probably the one who’s faced the strongest competition overall.

The possibility of this quartet participating in a four-way faceoff increased last year when Matchroom Boxing added Maiva to a powerful roster that boasts Harper and Choi. Before that, a unification bout between Hamadouche and WBA champ Choi got derailed.

We were recently in touch with Hamadouche and her dynamic manager Natalie Helf for an update from the Paris contingent on the super-featherweight equation and some insight into their plans.

“After pandemic reports changed things for the fight in Korea against Hyun Mi Choi scheduled for last February and then in England for Olympic boxing events, it was the beginning of a difficult time for me to train and for my police job,” reflects Hamadouche. “I was training in a car park with workout stretching bands, medicine ball, etcetera. I wore a mask while doing police work but I haven’t been working there lately, to avoid getting sick with Covid since I’ve been preparing for competitions.”

While changing infection rates still mean uncertainty, Olympic qualifiers remained on Hamadouche’s schedule. European competitions in London planned for April were cancelled and a new location is still pending, though ultimately participants may be determined based on international rankings that were already established.

“Yes, of course I’m still planning on the Olympic Games,” Maiva affirmed. “Being selected is very important to me because I’m a woman who wants challenges. The amateur style is attractive for me because it helps me to progress. The switch from pros back to Olympics is complicated every time, but it forces me to adapt.”

Hamadouche dominated throughout a stay-busy title defense in Italy last December, with a TKO 8 against brave but completely outgunned Nina Pavlovic (6-4-1).

“The fight with Pavlovic was interesting, because I had not boxed professionally for eighteen months,” said Hamadouche. “It was dark around the ring. I tried not to look toward where the audience would be because it was very strange and could have distracted me. So I watched the refs outside the ring.”

“In Olympic boxing my behavior is technically different, and since I didn’t feel Pavlovic was too threatening for me I decided to take control and allow myself some moments of reflection, to try some new things to make myself more dangerous.”

That type of attitude is necessary when it comes to preparing for the other champions. Manager Helf elaborated on the previously proposed meeting with Choi.

“The IBF-WBA fight was signed in October 2019 and was scheduled for 2020 on February 22nd in Seoul,” explained Helf. “All the negotiations were fair with the Korean team, we had chosen the referee and received our flight tickets, when at the end of January, I received an email explaining that the fight would be postponed in regard to the health (Covid 19) situation.”

“Then we waited for the situation to evolve, the WBA members sent us an official email that said they were going to allow each champion to make an optional defense due to their inactivity, and also said after that they would enforce the unification fight next, unless the two champions agreed to decide otherwise.”

“Weeks ago, someone made an announcement and others spoke as if we didn’t exist, because so far no one has consulted us,” said Helf. “Honestly, Maiva is ready to jump in against all the other champs. We’re in a hurry to hear the proposals being made and we will choose the best and most respectful one. Meanwhile, the fight between Maiva and Ms. Choi is still valid.”

Matchroom’s Eddie Hearn may influence Hamadouche’s next move, as word from the UK indicates a promotional preference to match Choi with British favorite Harper, which leaves Hamadouche versus Mayer.

That would probably be fine with Hamadouche and Mayer, who’ve grown increasingly antagonistic toward each other on social media. In mid-February they exchanged messages that definitely weren’t Valentines. Mayer posted mocking tweets about a proposed June 19th date and accused Hamadouche of using Olympic qualifying as an excuse for not fighting, with part of the message stating: “If you choose Olympics VACATE your belt…nobody has time to wait on you.”

Hamadouche claimed any news about her intentions was “fake” and responded “You must pray all night I’d choose the Olympics…to get another belt fighting nobody as you’ve always done, but be sure, I will be there for you.”

“Mikaela Mayer pisses me off, because she doesn’t want to shut up!” the usually reserved Hamadouche told The Prizefighters.com. “She speaks too much, and very quickly (without thinking). She will have to fight me even if she doesn’t want to.”

While Harper would probably be a substantial favorite in a UK fight against Choi, Hamadouche-Mayer is a much harder battle to predict, and pretty much a pick’em affair.

Decades ago the men’s middleweight division had a now legendary foursome including names like Leonard, Hagler, Hearns, and Duran that became known as The Four Kings. Could the current female super-feather weight champions reach relatively similar status? Four Queens has always had a nice ring to it.

“I want to fight all the other three champions, in some big events,” observes Hamadouche. “If the opportunity is huge, I’d like to fight Mayer first in the United States. After that, Choi and Harper. But if the conditions are good and if I must fight against Choi first because we had a contract to be honored, that will be perfect also. It’s not a problem.”

“But for the challenge, it would be a pleasure to beat Mikaela Mayer in her home.”

We asked Hamadouche if she’d been keeping track of potential future opponents.

“Yes, I watched Mayer versus Brodnicka, Harper versus Thanderz, and Choi (versus Calista Silgado). My opinion is that I’m waiting to fight them and see if they really have any punch, or if they are actually tough because so far I’m not impressed.”

In addition to collecting title belts or Olympic medals, Hamadouche mentioned other goals she’s working on.

“With the police, I want to get involved in the fight on violence against women, and also against sexual violence in sport,” she added. “I’m also studying law at a law school, and I have an exam I want to succeed at in 2021.”

Unfortunately, further pandemic surges can still change everything, not just the fight game. Most meaningful for Hamadouche at this point could be whether or not the Olympics go on, though that seems likely since Japan announced the games would now occur without international spectators.

On the pro front, Matchroom’s Hearn and Mayer’s promoter Bob Arum have a working relationship that isn’t always smooth but usually gets the job done if the money is right.

Therein may lay the biggest risk-reward quandary for Hamadouche in traveling to the US to meet Mayer. In monetary terms, Olympics notwithstanding, waiting for the winner of Harper-Choi (most likely Harper), might make the most long run sense.

That said, Team Hamadouche definitely has Mayer on their agenda, and it’s a fairly safe assumption Mikaela will continue to antagonize Maiva sooner not later, with increasing venom. What’s already becoming a grudge match could really catch fire, and their clash already seems like a guaranteed “fight of the year” candidate.

As April began, none of the four super-featherweight queens had yet signed for their next opponent but Matchroom’s schedule was increasing so at least two of that group could be set to clash soon. Since France currently has the most severe new pandemic waves it seems most likely that Maiva will be travelling, no matter who the opponent is.

Meanwhile, the main certainty seems that Hamadouche will progress in her criminal justice pursuits. It also won’t be a surprise if she lays down the law to some noteworthy boxing opponents along the way.

Hamadouche already has plenty of experience with the kind of judges that make rulings from ringside. Most of the time, she decides the verdict with a gavel that’s wrapped in her own hands.