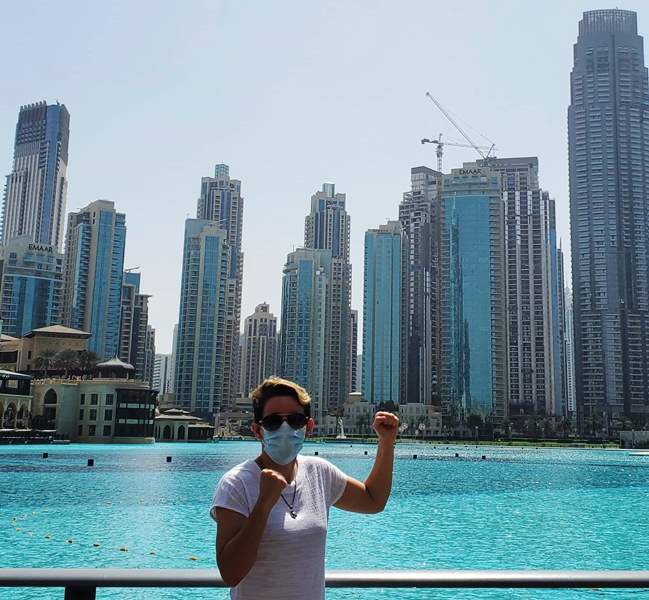 The longest member of the elite pound for pound club, the “Amazing” Layla McCarter headlines a fight card in the Middle East while two world title clashes take place in England this weekend.

All will be streamed.

McCarter (44-13-5, 11 KOs) jumps up to middleweight to fight Georgia’s Elene Sikmashvili (9-9) in a 10-round main event at Dubai. The boxing card called “Dubai War on the Shore 4” is co-promoted by Emirate Sports and Lion Heart Boxing Productions.

Various media outlets including FITE.tv will stream the boxing card.

McCarter insists she can make and fight in any of those weight classes.

For the last 14 years McCarter has not lost a prize fight. Though her record shows 13 losses, the last time the Las Vegas resident actually suffered a defeat was in 2007. Most of the current champions did not begin fighting professionally till long after that date.

It’s been a remarkable journey for the multi-skilled McCarter who began fighting professionally in 1998. Along the way she’s captured world titles from featherweight to super welterweight. She even pre-dates all of the major sanctioning organizations like the WBA (2004), WBO (2009), IBF (2010) and WBC that did not recognize women’s boxing until around 2005.

McCarter was actually the first woman to win the WBA lightweight world title back in January 2007 when she knocked out Donna Biggers in the second round. That same year was also the last time she was defeated. Melissa Hernandez holds that honor.

Though she seeks a world title matches in the lightweight up to super welterweight divisions, McCarter has found it difficult to find opposition.

“Elene Sikmashvili was the only fighter willing to accept this fight,” said McCarter.

Sikmashvili has fought mostly at the super middleweight division and against many world champions such as Christina Hammer, Elin Cederroos and Ivana Habazin. Though she lost to each of those fighters she does have a huge size advantage.

For McCarter, the fight serves multiple purposes. At age 41 can she continue to perform at the elite level against this new wave of talented fighters? Her assets have always been defense and timing. She’s faced every kind of fighting style imaginable in her career and out-lasted most of her contemporaries.

On Saturday, McCarter gets an opportunity to prove she still possesses fighting skills that have kept her among the top female fighters in the world pound for pound.

Marshall, 29, more famous for being the only boxer able to claim a win over Claressa Shields, defends against a former Shields foe. Comparisons of course are going to occur, but the tall British fighter with knockout power has a completely different fighting style.

Hermans, 31, though never stopped before, has shown durability but has a style that meshes with Marshall’s aggressive come-forward mode. It should be interesting.

Words and insults have been exchanged.

“She likes to stand and trade and I like to stand and trade. I just want to fight. I just want to punch her in the face. If she wants to burn her energy and time on social media, then let her do that,” said England’s Courtenay during a press conference. “If she wants to put polls out about underwear and wear a tiara on weigh-in day then crack on. Fill your boots. I don’t care. I’m there to fight.”

Debora Anahi Lopez (18-0-1) won by unanimous decision after eight rounds versus Debora Vanesa Gomez (7-6-1) on Saturday April 3. The flyweight bout was held at Buenos Aires. Lopez is the current IBF flyweight world titlist. Also, Yamila Abellaneda (11-4-1) and Paola Benavidez (8-4-3) fought to a draw after 10 rounds for the Argentine lightweight title.

Sofia Rodriguez (3-4) won by majority decision after six rounds versus Daiana Molina (2-1-1) on Wednesday March 31. The lightweight fight was held at Comodoro Rivadavia.

Nadia Flalhi (1-0) won her pro debut by technical knockout in the fourth round versus Angela Cannizzaro (6-9-1) on Sunday April 4. The super featherweight match took place at Marche.