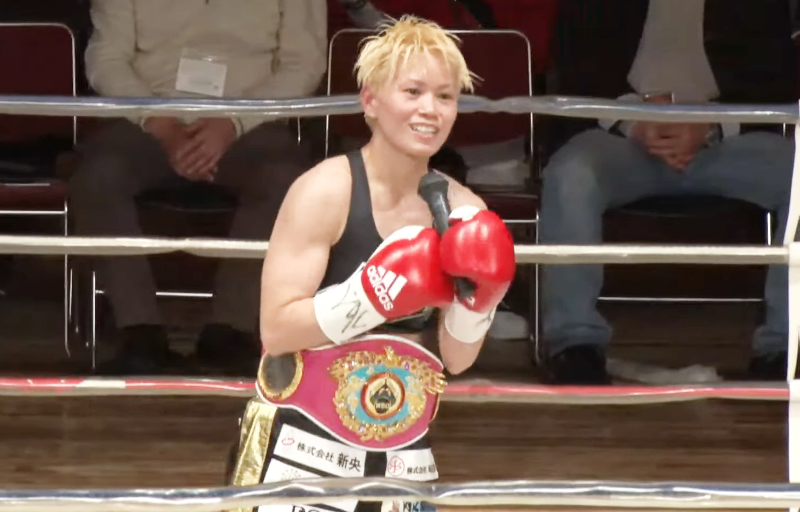 Despite three shutout scorecards WBO light flyweight champion Tsunami Tenkai was not a happy fighter following a third defense of the world title.

One week ago in Osaka, Japan, Tenkai（27-12-1, 16KOs）handily defeated Shione Ogata (11-7-1, 3 KOs) by unanimous decision after 10 two-minute rounds unanimous in Sakai-city, Osaka on Sunday April 4. All three judges scored it 100-89 for Tenkai. But it was not enough for the champion.

Tenkai marked a knockdown of Ogata in the second round but was unsatisfied by the dominant scoring.

“KO or TKO was what I wanted to show today, to entertain fans. I found I still need to improve myself,” said Tenkai.

While it went the full distance, it was an impressive fight that showcased the superb fighting skills of Tenkai and the incredible durability of Ogata. The two have different fight styles even though both have similar athletic backgrounds as serious soccer players.

Tsunami has built a 16 years-long professional career and been recognized as one of the best boxers ever in the country with her speed and fluent moves to dodge punches. Her masterful defensive technique gave a hard time to Naoko Fujioka, a five-division world champion and probably the best slugger all time in Japan, in their 10 rounds bout that ended in a draw in 2019.

Tenkai showed her superiority in every way to Ogata, who was attempting to win a world title for the first time. Everything that the champion exercised in the ring was quick and precise to overwhelm the challenger from the opening bell. At the end of the second round, she dropped Ogata with a left hook to the head. The audience saw it a completely one-sided game.

But Ogata displayed toughness and determination and refused to be stopped in the ring where she survived a lot of early struggles. Ogata suffered five losses and only one win in her first two years since her professional debut in 2012. Her career-changing victory was a majority decision win over then world champion Saemi Hanagata in a nontitle eight rounds contest in September 2017. She collected two regional titles to prove herself a legitimate world class fighter since then. Being backed by her manager Nobu Ishida, a former WBA interim super welterweight champion and well known for a first-round KO victory upsetting James Kirkland in Las Vegas in 2011, Ogata took a chance by challenging Tenkai, one of the biggest names.

While the challenger kept throwing with both hands, the champion was ducking them all beautifully and shook her with counter combinations. The referee could have halted the fight when Tenkai hurt Ogata with a left hook and followed up with punches. But the battle continued in a top gear until the final bell rung.

“I was kind of disappointed myself that I missed a KO. It showed that Ogata was a great challenger and also that I am not great enough. I keep myself improving more and more every day in the gym.”, said the two-time world champion.

Tenkai is one of only two active fighters (the other is Ayaka Miyao) who started to fight professionally before JBC Japan Boxing Commission decided to sanction female fights in 2008. She won her first world title, WBA super flyweight, from Xiyan Zhang of China in February 2009 and defended it four times until losing it to Naoko Yamaguchi in July 2012. She also suffered hard times with defeat on the road against Mariana Juarez, Zulina Munoz, Jessica Chavez, and Arely Mucino in their home Mexico. Tenkai finally reclaimed a world championship when she stopped Chaoz Minowa, national amateur standout, in great fashion for the vacant WBO light flyweight title in March 2018.

Through 16 years in a professional career of ups and downs, she is still in her prime. Tenkai is very professional. No matter who, when, where it is, she would take any chance offered including unification.