Boxing Returns to Japan in July
Written by: Yuriko Miyata 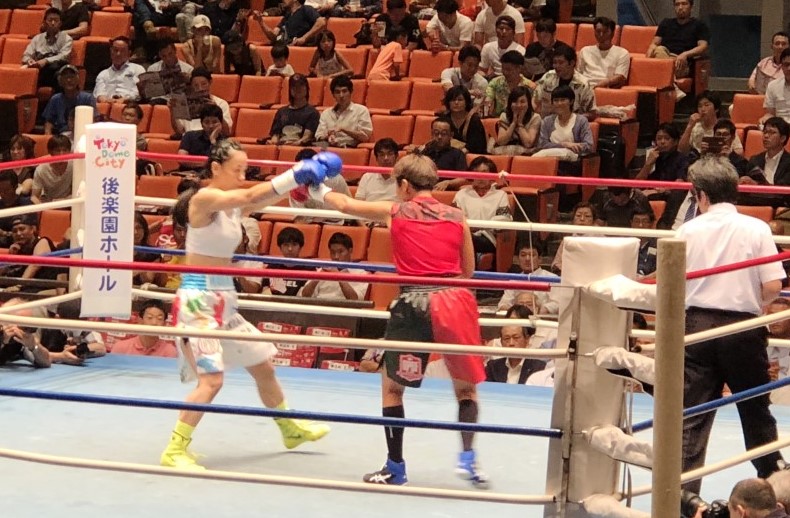 Boxing Returns to Japan in July; Top Fighters are Ready

Since the JPBA Japan Professional Boxing Association and JBC Japan Boxing Commission decided to suspend shows at the end of February due to the COVID19 spread, boxing will resume with some conditions for safety: the events will be closed to the public but after a four-month long closure it reboots with the 77th annual rookies tournament scheduled on July 12th.

The first female fight will be a four rounder at 108 lbs between Nanako Suzuki (3-2, 1KO) and Aoi Watanabe(2-2, 1KO) in an undercard of the Japanese super flyweight (male) championship, Kenta Nakagawa vs. Yuta Matsuo, on 22nd July at Korakuen Hall in Tokyo. For Suzuki, rated #3 by JBC at flyweight, it will be a restart under new management by Misako promotion, one of Japan’s oldest stables. It comes after a loss to Renz Dacquel of Philippines by unanimous decision in May 2019 in Hong Kong. Watanabe, #6 in the same ratings, won a unanimous decision in a four rounder against Riyuna Yoshikawa in her last fight last December. Twenty years young Suzuki is known for her girly good looks but actually she has solid fighting skills which she started developing in Kyokushin (full contact) Karate.

Since the government declared the state of emergency nationwide in early April, all boxing gyms had to shut their doors. Professional fighters got through that situation somehow by keeping themselves positive, active and ready for whenever boxing business resumed. WBO super flyweight champion Miyo Yoshida tried hard to spare some time for training while she had to take care of her daughter as her nursery school was closed, just after she was back from her camp in Los Angeles and Las Vegas in February. Naoko Fujioka, a five division world titlist, was training mainly in her neighborhood park with a physical coach to boost her gifted body strength. She turns 45 years old in August and wants to be ready for any chance to make her dream of fighting in America come true. She knows she does not have much time to waste. “In those months I pushed myself hard and I think that worked out”, said Japan’s leading fighter who added she feels better on her movement. Her gym reopened as the national emergency state has lifted on June 1st.

Now with the boxing business getting back on track along with JPBA and JBC’s safety guidelines, more fights will come. Before that, it would be good now to review the status of Japanese female top runners including five current world titlists, seven OPBF Oriental and Pacific Boxing Federation champions and national champions those who lead about 70 boxers in five weight divisions in JBC ratings which was established in 2017 to encourage domestic (novice) level boxers.

With a tiny physique, this very energetic orthodox fighter made her dream come true to be a world champion in her fifth attempt in September 2018 by beating former champion Yuko Kuroki by split decision for the vacant IBF atomweight title. She believed in a saying, that is “Don’t give up, and you still have a chance”, by her mentor Susumu Hanagata, who won the WBA flyweight championship in 1974 after falling short four times. Last September, she won a split decision to defend her belt for the first time to fellow rival Nao Ikeyama, a former WBO atomweight champion who obtained the title twice both by draw to Hanagata before. Following the V1, Hanagata announced her marriage to Takeru Okaniwa, a JBC ring official, last fall, but the bride is still an active fighter.

A skilled long range boxer Iwakawa snatched the WBO atomweight title from long reigning veteran Nao Ikeyama by split decision in July 2018, in her second challenge for world title after she lost to WBA 102 lbs titlist Yunoka Furukawa in 2016. Iwakawa was successful and made the most of her long arms to control Ikeyama’s never-ending pressure. She has not defended it yet since winning a clear unanimous decision to former world title contender Momoko Kanda last December.

Probably Tenkai is superior to any other fellow boxers in speed, footwork, and sense of defense, and she even gave trouble to the nation’s biggest name Naoko Fujioka last July. She challenged for Fujioka’s WBA flyweight title, putting her own title aside, and ended up with a split draw but she was not really caught by a power punch from the five time world champion. After she took difficult road fights in Mexico and Chile, she won a vacant WBO light flyweight title by a dominant 8 RTKO victory to fellow prospect Chaoz Minowa in March 2018. She obtained the title by stopping Jessebelle Pagaduan of Philippines in an eighth round knockout last December.

The Japanese leading fighter with five world belts keeps training in the hopes of fighting in America sometime soon. “That’s what I have not done yet before my career is over.” She works even harder since she found some room for growth in a tough fight with Tenkai last summer. Although she turns 45 years old in August, she is still sturdy physically and mentally.

The solid fighter with a lot experience in other combative sports is getting her own movement in boxing. She came back to the ring in 2016 after a two year hiatus due to taking care of her new born baby. Yoshida is one of the busiest female fighters with three jobs; a boxing instructor in the gym, mother of a 5 year old girl, and a current world champion. Last New Year’s Eve, she defended her WBO super flyweight title for the first time by unanimous decision against Li Ping Shi of China.

This skilled southpaw has been leading Japanese female boxing for almost 20 years since she was a top amateur, and she is still in her prime as she has built physical strength on her lanky figure to bear better punching power recent years. Adding to her WBA and IBF belts at 105lbs, she took the WBO version from Kayoko Ebata via clear unanimous decision in December 2018. She resigned the title soon to go for WBC’s belt, to complete her collection of four major titles. She is still on the way as she failed to get the vacant WBC title via a split draw with Ayaka Miyao, former WBA atomweight champion this January.

A former world champion with bouncy footwork has overcome a career-threatening knee injury that happened in a challenge of the WBO title against Nao Ikeyama in December 2016. It took almost two years to recover but she came back and had a revenge match against Ikeyama, who already lost her title to Iwakawa, to capture a vacant WBA title in November 2018. After she lost the title to Monserrat Alarcon of Mexico via a split decision in September 2019, she remains uncrowned as she drew with Tada this January. Her next challenge for a world title scheduled in August in Vietnam and is under negotiation.

Japan’s biggest, whohas a gold medal in world amateur championships in 2011, has real fluent movement and solid punches. She turned professional at the age of 22 in May 2018 and reached the top of the world within a year. But after she won that WBO minimumweight title which was vacated by Tada, her stable mate, by stopping Elizabeth Lopez Corzo in the sixth round, she announced her resignation due to marriage and pregnancy last summer. Recently it was reported that she gave birth to her first baby and shows her will to come back to the ring.

With years of amateur experience, this skillful tall southpaw turned professional in August 2018. She collected the OPBC title in her second fight and added the Japanese title in the next fight.

Hazuki is a tough determined fighter. Although she has four losses she always gives exciting close performances. In her latest fight, last November, she won the OPBF title, her first title as a professional, beating Eruka Hiromoto by split decision.

Ogata is a good jabber with great stamina. While she struggled in earlier days, she remains unbeaten three years and is collecting regional titles such as WBA Asia light title, WBO Asia Pacific title, and now OPBF title to prove she is one of the best 108lbs in Asia.

Minowa turned professional in 2016 with a volume of national titles in amateurs. All three losses were in fights for world championships. She keeps her OPBF title that she won in December 2016.

Terumi is one of the most determined fighters in Japan and has already challenged for world titles three times, all abroad including against Mariana Juarez in July 2017 and August 2018 in Mexico.

The tall awkward boxer won both the vacant OPBF and JBC bantamweight titles in a rematch against  prospect Kanako Taniyama, a former champion in kick boxing, this January.

This 39 year old mother of three is a fighter with accurate powerful combinations. While she lost in her first attempt for a world title against Hyun Mi Choi in Korea last June, she keeps her OPBF title which she took from Kimika Miyoshi, two time world title contender, in July 2018.

A tall outside boxer with good jabs, it was her third attempt for a Japanese title when she finally captured the vacant title by unanimous decision over Yumiko Shimooka this January.

This southpaw with good footwork and speed is just 20 years old. She won a vacant Japanese flyweight title via unanimous decision over Marina Sayama last December.

Miyoshi is a two time world title contender with impressive toughness and stamina. After she lost two times in a row to Fujiwara, she won the JBC title from Miki Mitsuda by a split decision in September 2019. She stopped Aira Midorikawa in the sixth round to defend the title three months later.