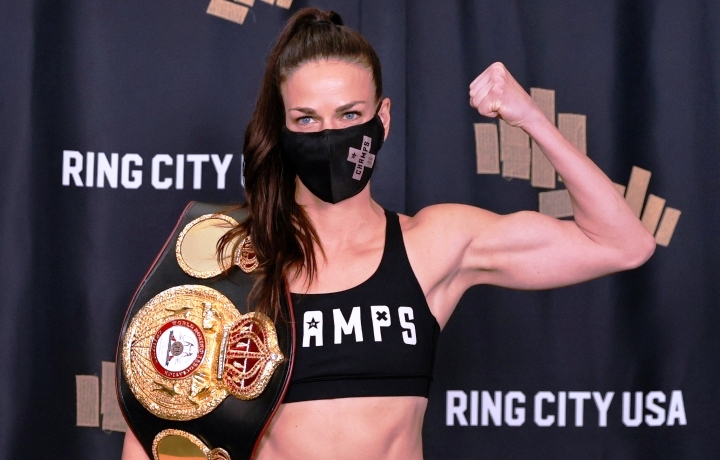 That swelling wave of women prizefighters continues to grow larger and more visible.

The year 2021 has been a breakout year for women’s boxing with various media outlets showcasing the female fights more than ever.

Mrdjenovich (41-10-2, 19 KOs) hails from Edmonton, Canada and has been one of the longest reigning world champions. Though most of the boxing world prefers to see her match punches with WBC and WBO featherweight titlist Amanda Serrano, this match still merits attention.

Mexico’s Cruz (12-1, 3 KOs) has been hardened by her Mexico City wars and also fought in Italy where she handily defeated Vissia Trovato where she breathes, in Milan. Though not as experienced as Mrdjenovich, the Mexican fighter is 30 years old and there’s no time to gather experience. The time is now.

This is Mrdjenovich’s second consecutive clash against a Mexican foe. Her previous fight against Paola Torres was a bloody slugfest last December in Los Angeles. This might be more of the same.

Whoever wins might be next for Serrano who seeks to unify the featherweight division. She already has two of the belts, one that previously belonged to Mrdjenovich who allegedly ignored previous challenges from the Puerto Rican slugger.

Mrdjenovich and Cruz promises to be another slugfest.

Originally, Zamora and Esparza were set to meet this week, but the male headliner was canceled due to an injury to D’Mitrius Ballard who was meeting Mexico’s Jaime Munguia. Both bouts will now meet in June.

Another fight card featuring former featherweight world titlist Heather “the Heat” Hardy and Canada’s Jessica Camara has also been moved to another date. The DiBella Entertainment fight card will be moved to Friday May 14 at Nashville, Tenn. UFC Fight Pass will stream the card.

Hardy (22-1) and Camara (7-2) are the main event but several other notable fights will also be shown including lightweight contender Melissa St. Vil (13-4-4) versus Olivia Gerula (18-18-2); former world champion Carina Moreno (25-7) versus Natalie Gonzalez (6-1) in a light flyweight bout; and Mikiah Kreps (1-0) versus Alex Love (3-0) in a bantamweight clash.

DiBella has a number of high quality female fighters itching to perform. He will be showcasing them later in the year on UFC Fight Pass.

Gabriels held the WBA super welterweight title but somehow was shoved aside when Claressa Shields grabbed it without a fight. They had fought each other before in 2018 but that was in the middleweight division. Shields won by unanimous decision and was floored for the first and only time in her pro career.

With Shields capturing the light heavyweight and heavyweight titles, does that mean she is going to stay at the heavier weight class?

One thing, it does position the Costa Rican fighter to meet Shields, Franchon Crews-Dezurn or Savannah Marshall if any of them want to add another weight division world title on their resume. They can come through Gabriels if they desire.

Naiara Pacheco (1-0-1) and Florencia Villarreal (0-0-1) fought to a draw after four rounds on Saturday April 17. The flyweight bout was held at Mendoza.

Florencia Salazar (1-0) was the winner by unanimous decision after four rounds against Erica Alvarez (0-1) on Saturday April 17. The lightweight match took place at Santa Fe.

Daniris Garcia (1-0) knocked out Mileydis Hoyos (0-1) in the first round on Saturday April 17. The light heavyweight bout was held at San Antonio de Palmito.

Victoire Piteau (8-1) defeated Sara Marjanovic (7-9) by unanimous decision after 10 rounds on Saturday April 17. The lightweight match was held at Indre.

Nina Meinke (12-2) won by unanimous decision after six rounds over Tereza Dvorakova (3-5) on Saturday April 17. The featherweight fight took place at Hamburg. Also, Natalie Zimmermann (4-0) won by knockout in the first round versus Fagbule Esther (0-4) in a lightweight match.

Monica Henao (4-1-3) knocked out Iris Bustamante (1-1) in the third round on Friday April 16. The lightweight bout took place at Panama City. Also, Azucena Zuniga (1-1) defeated Yanissa Castrellon (0-1) by decision in a four round flyweight bout; and Monica Cruz (2-1-1) and Luciana Ascanio (1-0-1) fought to a four round draw in a super flyweight match.