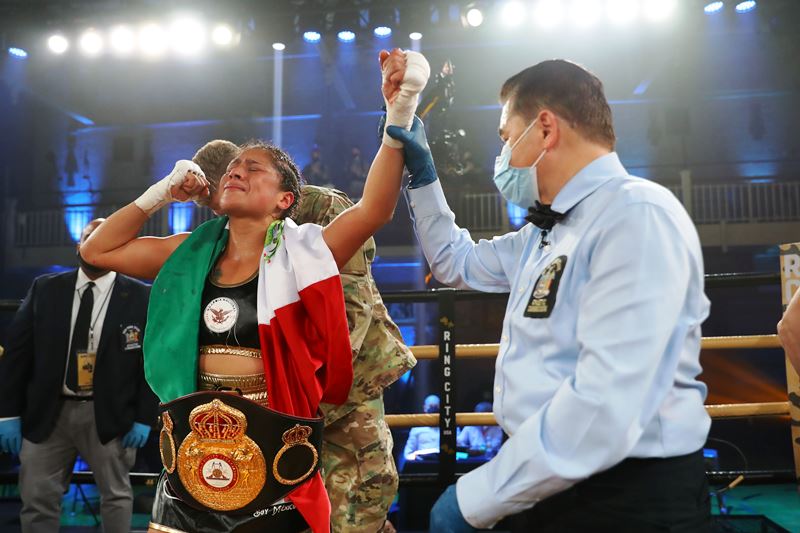 “That’s not fair, I can see,” that might be the defining phrase of Jelena Mrdjenovich’s career.  On Thursday night, from the historic United States Military Academy in West Point, New York, and live on NBC Sports’ “Ring City”, the 38-year-old Canadian lost her WBA featherweight title via a technical decision to Mexican Erika Cruz Hernandez (13-1, 3KO).

The world title fight was scheduled for 10 rounds, but veteran referee Benjy Esteves Jr had seen enough of a gushing cut over Mrdjenovich’s right eye to stop the fight at the 25 second mark of the seventh round.

The result went down to the cards with all three judges, John Basile, Glenn Feldman and Robin Taylor, giving all the rounds, including the partial seventh, to Cruz of Mexico City with scores of 70-63.

Mrdjenovich (41-11-2, 19KO) has suffered a tumultuous 15 months with her long-time trainer Milan Lubovac’s failing health and the WBC roundabout way stripping the veteran fighter by “elevating” her to Emeritus champion and handing the green and gold 126-pound world title to Amanda Serrano a few months ago.

After more than a year layoff, Mrdjenovich made her United States debut last December defending her WBA strap for the sixth time against Iranda Paola Torres with a unanimous decision.  That night wasn’t Mrdjenovich’s best and she began to show each of 38 years but proved her heart was as big as her will by gritting out the win.

As far as the southpaw Cruz, an amateur standout in her native Mexico with two national titles, was coming off a unanimous decision eighth round win over Leticia Uribe in Tijuana, Mexico, last February.

It seemed as if Mrdjenovich was looking for an early night as she came straight for Cruz with the opening bell.  Mrdjenovich looked to land her heavy overreaching right hand early on as Cruz looked to counter.  It was evident Cruz was not intimidated by sharing a ring with a veteran like Mrdjenovich as she landed wide but effective combinations to the body and head of the Canadian.

Cruz kept controlling not only the action but the geography of the fight catching the slower Mrdjenovich as the champion looked to close the gap between the two.  The beginning of the end for Mrdjenovich came in the third when an accidental head butt opened up a cut over her right eye.  Early in the fourth Mrdjenovich scored a hard right hand which proved to be her best punch of the night but Cruz began to press the action by throwing and scoring more punches.

In the fifth referee Benjy Esteves Jr asked the ringside doctor to check Mrdjenovich’s eye as it kept bleeding.  Cruz kept working and pressing the action, scoring with hard over hand rights followed left hands to the body.  In the sixth bruised and battered, Mrdjenovich’s eye was checked again but was allowed to continue despite a slight swelling over the same right eye as well as her lip.

As soon as Cruz scored her first volley to open up the seventh round, Esteves Jr called a halt to the action despite Mrdjenovich’s protests. The judges confirmed what everyone else knew, a new champion was claimed.

“This belt is for you,” with tears in her eyes, Cruz said in the post-fight interview to her father and trainer who was not able to travel with her daughter.  “I just can’t control my emotions.  Mexicans are warriors and this is a job we did together.  I couldn’t do everything he asked of me because I was facing a world champion.  I couldn’t come this far and leave empty handed.”

Now with Mrdjenovich’s loss, a much-awaited face-off against arch-nemesis Amanda Serrano can be discarded.