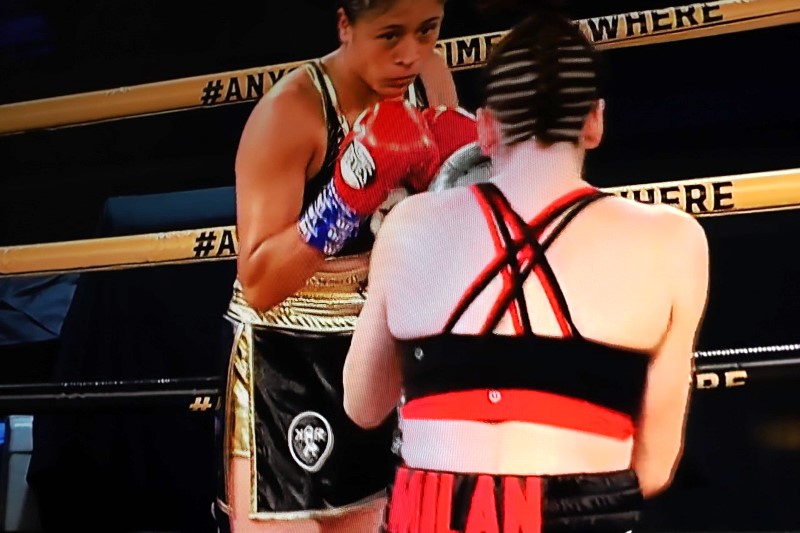 A tearful Erika Cruz accepted congratulations and the WBA featherweight world title belt amid some shocked observers at West Point U.S. Military Academy and those watching via television and streaming from around the world.

The southpaw Mexico City prizefighter out-punched and out-pointed Canada’s long-reigning world champ Jelena Mrdjenovich by technical decision in the seventh round. A severe cut near the left eye forced an early stoppage. All three judges gave Cruz every single round.

According to various reports, Mrdjenovich had refused a unification match with WBC/WBO featherweight titlist Amanda Serrano the southpaw slugger from Brooklyn. Instead, she accepted the lighter hitting version in Cruz and was still soundly defeated.

I guess the moral of the story: take the bigger purse when its available.

Had Mrdjenovich accepted Serrano’s offer they surely would have both fought for more money than the Canadian made fighting Mexico’s Cruz. Now, a bigger purse will be made by Cruz to fight Serrano in a Mexico versus Puerto Rico war.

Speaking of Mexico vs. Puerto Rico, last weekend, the world watched one of those Mexico-Puerto Rico rivalries as Emanuel Navarrete and Christopher Diaz continued the savagery. After 12 rounds of brutal exchanges the fans witnessed yet another display of that decades-long war.

Will Serrano versus Cruz provide the same intensity and savagery when they meet?

Serrano said to count her in.

“I just hope it happens I don’t care where,” said Serrano who seeks undisputed status as featherweight world champion.

Both are southpaws with a similar style, but few hit like Serrano. You just never know what’s going to happen when Puerto Rico fights Mexico. Back in 1981, the great Wilfredo “Bazooka” Gomez fought Mexico’s Salvador Sanchez in one of those epic clashes. It was my first time witnessing in person the heated rivalry.

Serrano versus Cruz can be another spectacular addition.

Undisputed lightweight world champion Katie Taylor returns to the United Kingdom and this time faces a fellow Olympian in Natasha Jonas on Saturday May 1, at Manchester Arena in Manchester, England. DAZN will stream the world title fight.

Ireland’s Taylor (17-0, 6 KOs) is very familiar with England’s Jonas (9-1-1, 7 KOs) especially during their amateur careers. Though Jonas was England’s first female boxer to participate in the Olympics, she was eliminated by Taylor when they met in the quarter-finals in London in 2012.

Jonas has a three-inch height advantage over Taylor and she’s a southpaw. That always spells trouble for most matchups. But Taylor is very familiar with Jonas who fought WBC super featherweight titlist Terri Harper to a draw in August 2020.

It’s an interesting matchup between old foes in the professional ranks. Taylor has vastly improved her professional skills and seems to know how to expend energy properly. We shall see if Jonas can keep up.

All Female Card in England

Five female bouts were shown including Nicola Hopewell but statistics like records and weights were scarce. It was a good first show but the producers need to work on their numbers game and captions.

Maybe they had a time limit.

Dilar Kisikyol (4-0) won by unanimous decision after six rounds versus Karina Kopinska (13-38-4) on Saturday April 24. The super lightweight bout was held at Hamburg.

Erika Cruz (13-1) of Mexico was the winner by technical decision after seven rounds versus Canada’s Jelena Mrdjenovich (41-11-2) on Thursday April 22. The WBA featherweight world title fight took place at West Point, New York. It was Mrdjenovich’s first loss in six years. A bad cut near the champion’s left eye forced the stoppage.