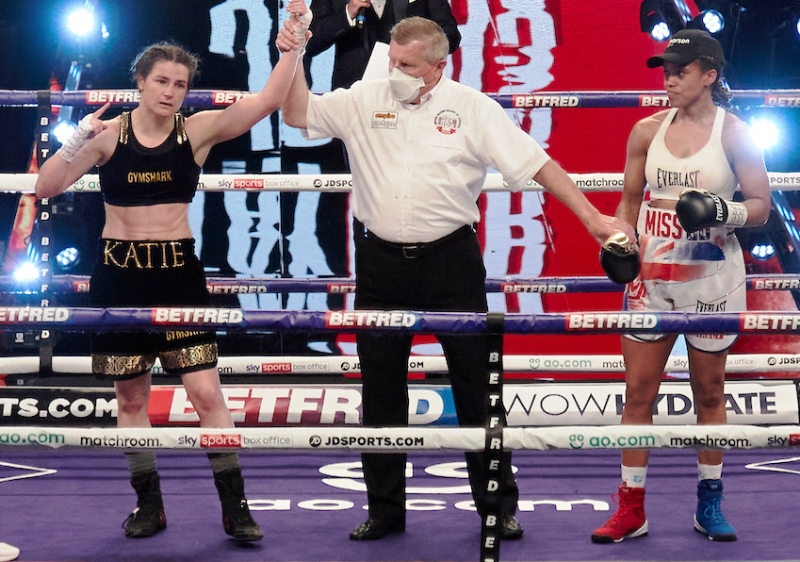 What’s Next for Katie Taylor and More Fight News May 3, 2021

It was close, but not close enough.

“It was probably a bit too exciting for my liking,” Taylor said.

Taylor’s continued improvement over the professional style allowed her to circumvent the taller and surprisingly strong effort from Jonas whose southpaw style showed flashes of power. Those power shots were just not enough to overcome the abundance of pinpoint shots that Taylor tallied early in the fight and in the final two rounds.

Jonas seemed to gain comfort in the middle rounds but had allowed Taylor to out-hustle her early in the fight. Though Jonas landed solid heavy shots late in the fight, those quick combinations by Taylor gave her an early lead she never relinquished on Saturday night in Manchester, England.

“She showed everything it takes to win a world title in her last two performances. Tonight was a brilliant showcase for women’s boxing and boxing overall. Every time we fought as amateurs it was that type of fight as well,” said Taylor who also defeated Jonas in the 2012 London Olympics. “I’d prepared for a hard ten-round battle tonight and that’s exactly what it was.”

So what’s next for Taylor?

Taylor has not fought an American fighter in three years. Since October 2018 she has fought seven foes and all but one hailed from Europe with the one exception being Brazil’s Rose Volante.

American fighters pose the greatest danger to Taylor. And there are many at the lightweight division and above eagerly awaiting their opportunity.

Heather Hardy, the former WBO featherweight titlist has moved up two weight divisions and will fight at the 135-pound lightweight division. She faces Canada’s Jessica Camara in the main event.

Hardy has long been a great ticket-seller in the New York City area but with the pandemic situation still preventing large crowds, it makes sense to place the fight in the best location.

Also, on the same card will be Melissa St.Vil a leading lightweight contender for many years who also hails from the New York City area. She will be fighting former champion Olivia Gerula who also is Canadian.

Any four of those fighters are candidates to fight Katie Taylor.

Those are four of many other possibilities.

Three outstanding alternatives are Amanda Serrano, Layla McCarter and Jessica McCaskill. Those three are all on our Pound for Pound list and very capable of topping the reign of Katie Taylor. All three can easily make 135 pounds but fight at different weight classes because other lightweights fear them.

America is where the most profit can be made and also the most danger for the very talented Taylor.

Shadasia Green (8-0) knocked out Angie Barcas (2-15) in the first round on Saturday May 1. The super middleweight fight took place at San Antonio de Palmito.