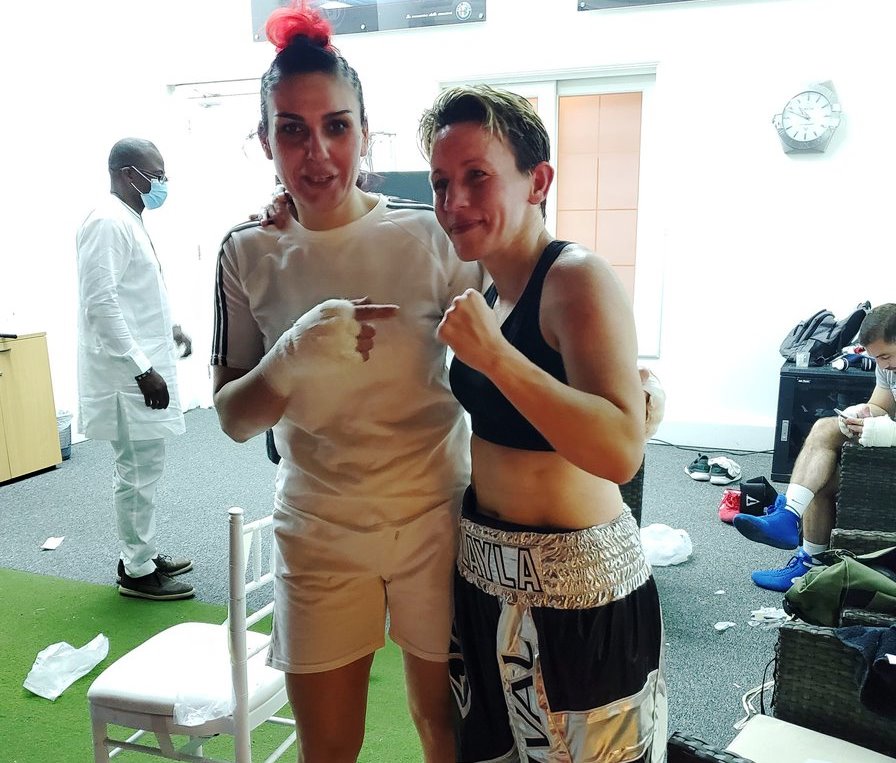 In early April, veteran fighter Layla McCarter (44-13-5, 11KO) made the long trip to Dubai to be part of “Dubai War on the Shore 4”, an invitation-only boxing event held at the Arabian Ranchers Golf Club.  McCarter was not the only featured female fighter on the card, world title challenger Ivana Habazin also saw activity on the multi-bout fight card.

McCarter of Las Vegas, Nevada, took the win over Elene Sikmashvili (9-9, 4KO) via a 5th round TKO despite her opponent coming in well above the contracted weight limit of 154 pounds.  Sikmashvili actually weighed in much more than 10 pounds over coming in closer to 170 pounds.

“We had a limited supply of opponents, they could only bring in somebody from the country of Georgia,” McCarter explained in an exclusive interview with the all-female boxing podcast 2-Min Round.  “when I looked up all the women that fight in Georgia, none of them had a winning record except for one.  One had an even record and that’s who I fought.  She happened to be a middleweight or super middleweight.  They told me she could be 154 (pounds), but apparently, she could not. We made the fight at 154.”

“Our agreement was at 154 pounds which is still pretty heavy for me,” she explained.  “When she came in at 169.8 pounds, all we said was, ‘oh my God’.  What are we going to do? How can we make this work?  Are we going to have to do an exhibition, we didn’t know.  Even on the morning of the fight, we didn’t really know.  The promotor left it up to me.”

McCarter explained the fact she went halfway around the world for a fight, was reason enough for her to go through the match.  “I didn’t want to give my haters more to talk about by leaving and not having a fight or by having an exhibition.  If we are going to hit each other, let’s hit each other and make it a fight.”

Sikmashvili not only had a substantial weight advantage over McCarter but also several inches in height and reach. But the former world champion had the experience to deal with it.

“The first time I saw her was at the warmup before the fight,” she explained.  “I confused her with Ivana’s opponent and when she pointed out Elene, this giant girl walking down the hall, I said, ‘oh my God.’  I always bet on my skill, that night was no different.”

McCarter was the better of the two.

Sikmashvili had potent fists and the American fighter felt them.  “From the first jab I felt my timing was good, I felt pretty confident but I didn’t want to make any mistakes so I took my time. I think I could have knocked her out within the first round or two the way she was reacting when I hit her, I knew I could get her out of there quick.  I didn’t want to take a risk because she was so big so I was being cautious.  I took my time.”

McCarter forced a stoppage of the much larger Sikmashvili in the fifth round. It was seen around the world on FITE.tv.

Dubai and other matters

Not only was the fight an interesting experience but also visiting Dubai with its vast cultural differences to the United States. McCarter has fought all over the world in such places as Japan, Canada, Australia, South Africa and Mexico among others in her vast 23-year professional career.

“I didn’t know what to expect,” she said of the middle east country.  “We all have these pre-conceived notions of what it is of being an Arab country, all these things.  I have a half-brother and he is half Kuwaiti so his father is from Kuwait and he lives in the Persian Gulf.  I have been exposed to the culture but it was a whole different experience.  Being a woman, being a fighter, I didn’t know how they would receive me but it was pretty awesome. They were great hosts.”

For quite some time McCarter has been a free agent which gives her the opportunity to freely choose who and where she fights.  In just her last five fights, all but one has been outside of the United States.

She said she likes it that way.

“We are independent, we are free, I want to remain free,” she said of her promotional situation.  “I have done my entire career just like that.  We just work with everybody.”

In the past, major promotors have contacted McCarter’s team but nothing has developed.  Like always, she is open to fighting the best out there.  “They haven’t reached out to us recently but we are trying to fight anybody from 135, Katie Taylor, to 147 would be ideal.”

McCarter normally walks around at 137 pounds even when not scheduled to fight.

Though McCarter sits on the top or near the top of different welterweight rankings, she has lost faith in what the IBF, WBA, WBC and the WBO can do for her. Especially when they couldn’t deliver her a fight against Cecilia Braekhus when she was unified world champion.

“I was pursuing Cecilia Braekhus for many years even though I was the (number one) mandatory for the IBF,” she explained. “They never actually forced the fight and she was able to keep her belts, nothing really was done about it.  After that, since then, I actually lost faith in the organizations will do the right thing.  I think they will do what is best for them.”

McCarter’s knockout win over a much heavier and much taller fighter showed her willingness to accept challenges. She also has not lost a fight in 14 years.