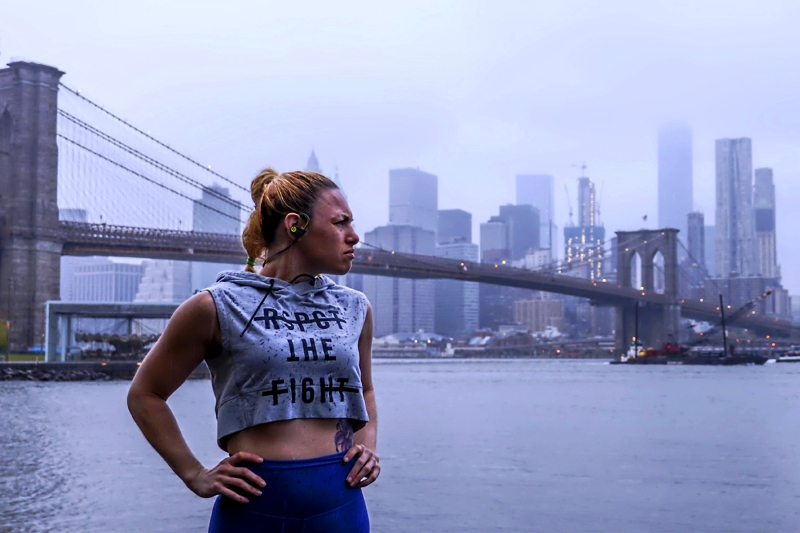 This weekend from the Embassy Suites by Hilton Hotel in Murfreesboro, TN, veteran Heather Hardy (22-1, 4KO) will come back from a nearly two-year break from boxing to take on the tough Jessica Camara (7-2, 0KO) of Montreal, Canada, in a scheduled eight rounder in the lightweight division.  The fight will be the main event of a card presented by DiBella Entertainment which will also feature three more female bouts.

The event will be televised by UFC Fight Pass in the United States.

The night marks the first fight for Hardy since September of 2019 when she lost a unanimous decision against Amanda Serrano, also of New York.  In that loss, Hardy dropped her WBO featherweight title.

“I hate to say this but I have common sense,” Hardy said in an exclusive interview with the 2-Min Round, the all-female boxing podcast.  “I really didn’t go into that fight barring something unnatural or completely unexpected happening that I was going to pull off the win.  Amanda is technically a more sound fighter than me and that is not something a one fight camp is going to fix.  I have gaps in my game that there just wasn’t time to fix.”

“We went in there saying we are going to be tough; we are going to throw it out, we are going to do the best we can to get the win,” Hardy explained.  “The other side is the business of it.  She had two fights left on her contract and this was her ‘tune-up’ before she fought Katie (Taylor).  I didn’t even go into that fight thinking common sense wise that I would come out with the belt but I sure hoped I would.”

What Hardy learned from that fight is a lesson she and the rest of the boxing world already knew.  “I am tough as hell.  Most girls won’t even fight her.  They hide behind excuses.  As soon as the fight came, I stepped up.  That is what champions do.  I don’t care if nobody gives me credit for that.  That is what makes me proud.  Nobody will ever say that I was afraid to fight anybody.  I fought that girl.”

The 39-year-old Hardy of Brooklyn, New York, explained that in the beginning of the Covid-19 pandemic, she received a phone call that would change the course of life at least for the remainder of last year.

“When the pandemic started Lou (DiBella, Hardy’s promotor) called me and said, ‘listen, boxing is really put on pause right now so just worry about you and Annie right now.’  Annie is my daughter,” Hardy said matter-of-factly.  “‘Worry about work, worry about how you are going to provide.  Don’t count on a boxing paycheck in 2020.  If you need help, call me.’”

“Lou checked up on me every couple of months but I did exactly what he said,” she continued.  “I didn’t even think or lean on boxing.  I abandoned my training completely and only trained clients. I did what I had to do to put food on the table. I am very fortunate.”

Hardy will be taking on the much less experienced Camara,33, who is coming off only the second loss of her pro career.  Early last year, Camara dropped a unanimous decision against Hardy gym mate and sparring partner Melissa St. Vil.

“I know she is strong; she has all her fights at that weight,” Hardy said of Camara who is a natural 135 pounder.  “I know she is tough; she is taller than me and I hate fighting taller girls.  It should be a good fight.”

Nearly ten years ago Hardy began her career at the bantamweight limit of 118 pounds finding success in the featherweight division capturing the WBC International title with a couple of epic brawls against Shelly Vincent in ’16 and ’18 respectively.

Now she says it is time to move up in weight.

“When they offered me the world title in 2018 against Shelly Vincent, I had no choice to take it, but I was already ready to move up to 130-135,” she says.  “I was the featherweight in every single fight spitting in a cup, the last 30 hours no food or water.  I was typically hunched over, crying dry tears, shaking, going to the scale every single time.”

“I don’t know if I can make 126, I don’t know if I can even make 130 to be honest with you,” Hardy stated of her current weight.  “I just don’t want to put my body through that kind of stress.  It was something I thought about, if I was going to come back and fight, I am going to come back at 135.  A weight I know I can safely get to and from there I will see where I can safely get to, but I am not going to go on a two-year layoff, try to comeback and have it be all about making weight.  I have to train boxing, I didn’t train all of 2020, I literally did not look at my gloves, I had to dust them off.”

Nearly 40 years old, with dozens of wars inside a boxing ring and a couple inside a MMA cage, Hardy is adamant in not overstaying her welcome in combat sports.

“I will not stay longer than my body lets me,” she said emphatically.  “I don’t care how exciting it is.  I am not going to say a single word about how much I have left until the minute I get out of the ring because it is never about the fight camp.  Since I started training, I hated training, I hate walking into the gym but I fight because I like to fight.”

“I will have to see after this fight if it was all worth it,” she says.  “I am 39, I am working twice as hard to do the stuff that used to take me half the time.”