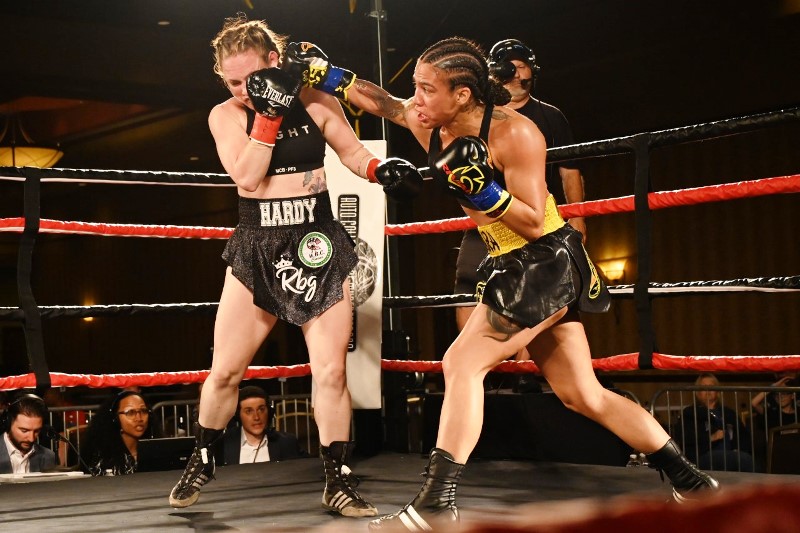 Canada’s Jessica Camara overcame a first round knockdown to rally past former world champion Heather Hardy and won by unanimous decision in a lightweight battle on Friday in Tennessee.

It was Hardy’s first venture as a 135-pound lightweight.

Camara (8-2) was in comfortable territory and used that to defeat Hardy (22-2) in a fight that seemed closer than the scorecards showed at the Embassy Suites Nashville in Murfreesboro. It was the DiBella Entertainment main event and first in a series of cards for UFC Fight Pass.

Within 20 seconds of the opening round Camara hit the deck during an exchange of punches. The referee looked surprised and decided to call it a knockdown as the Canadian fighter looked surprised.

After the first round Camara used strong punching as Hardy seemed more tentative in her first engagement as a lightweight. Her entire career had been spent as a 126-pound featherweight and lower. Caution seemed to be on her mind.

That caution opened up the way for Camara who took advantage with accurate rights early in the first half of the eight-round fight. The Hardy machine was in low gear.

But Hardy has never been known as a quitter.

The Brooklyn boxer shifted into a more agile gear and began moving, slipping and striking with quick combinations. Though her power didn’t seem as strong in the heavier division, she was able to score to the body and head then slip out of danger in the fifth and sixth rounds.

Hardy’s best round seemed to be the lucky seventh when she opened up with several three-punch combinations. Camara connected with a counter right and was met with a Hardy counter left hook.

It seemed like the eighth and final round would dictate the winner. Each fighter seemed weary with Camara connecting with another solid right and Hardy retaliating with three-punch combinations.

“I went up against one of my role models,” said Camara. “I had to make adjustments. We got the job done.”

St.Vil was simply the faster and more agile fighter against Gerula. Though it was her first fight in more than a year, the Brooklyn-based fighter looked sharp and seldom was hit in the early half of the fight.

But Gerula has more than 20 years of professional experience and made key adjustments. She cut off St. Vil’s escape route and connected with a solid right cross. That seemed to re-awaken St. Vil.

Returning to her strength, St. Vil opened up the seventh round with a five-punch combination and then pumped out a three-punch combo. A strong one-two combination snapped Gerula’s head back and Gerula countered with a big right cross but it was St. Vil’s round for certain.

Both veterans battled furiously in the final round and after eight, the three judges scored the fight 80-72 and 78-74 twice for St. Vil.

“It was an honor to share the ring with Olivia Gerula,” said St. Vil.

Coleman, 20, seemed the stronger fight for the first two rounds but Wickstrum, 34, had the head movement and was able to find placement for her blows too.

Pro debut fighters seldom are as polished as these two.

“That was so bad ass,” said Wickstrum after the fight. “I dug and dug my heart out.”

It was an excellent debut for both Wickstrum and Coleman.