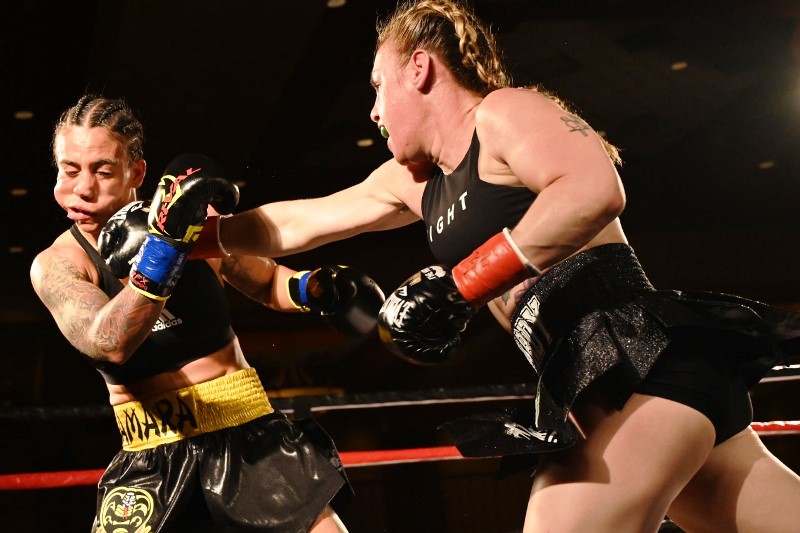 With pandemic conditions still existing in most of the world, large crowds are not allowed except in the southern regions of the USA.

Recently a boxing card sponsored by British-based Matchroom Boxing saw more than 73,000 fans attend one of its cards last week in Arlington, Texas. This past weekend a DiBella Entertainment card moved to Tennessee in the southern region of the U.S. and several hundred fans filled the venue to capacity.

In the first of a series of female fight cards DiBella Entertainment with UFC Fight Pass rolled out the first edition of 2021 “Broadway Boxing Presents: Ladies Fight” last Friday and despite minor hiccups the show was a hit. Three women bouts took place with Jessica Camara upsetting Heather “The Heat Hardy in an entertaining and strategic lightweight scrap. It also pit lightweight contenders Melissa St. Vil and Olivia Gerula in an eight round fight. A third match pit two pro debuting fighters in a back and forth battle.

It was supposed to be four female bouts but one of the fighters was severely over-weight and that fight could not proceed. Still, the three remaining bouts proved that good matchmaking can keep fans riveted.

Lou DiBella, the president of DiBella Entertainment had moved the entire fight card from its normal New York City location to Tennessee where fans were allowed. Women’s boxing has been around for decades but some areas of the continental U.S. have not seen many female fights. This was Tennessee’s opportunity and they showed up.

It was also the opening show for DiBella’s new deal with UFC Fight Pass and there should be three more shows by the end of the year, said DiBella who has signed more top prizefighters than any other promotion company. It’s a perfect fit and serves as yet another vehicle for showcasing talent that has long gone invisible.

Lose One, Gain Several Others

It was a severe lost when WBC titlist Terri Harper suffered another fracture to her hand just before her expected super featherweight showdown with WBA titlist Hyun Mi Choi last Saturday in England. It was set to be the main event.

The injured Harper was seen wearing a cast on the DAZN streamed fight card with one of her stablemates who fought on the Matchroom Boxing card. She looked slightly out of place but spoke sincerely about her injury and returning as soon as possible but no less than five months.

Injuries are part of the sport. It’s always amazing that they don’t happen more often considering the stress a professional fighter puts on their bodies and especially with their fists.

Meanwhile, Las Vegas, Nevada, the casino capital of the world, has opened up with fans now allowed at a reduced capacity due to the pandemic. That means big money fights are back and female world title fights are more than welcome.

First on the list: WBC super lightweight titlist Chantelle Cameron (13-0) defends against veteran pugilist Melissa Hernandez (23-7-3) one of the more skilled fighters of her generation. Their match takes place on May 29, at the Michelob Ultra Arena in the Mandalay Bay Resort and Casino. It’s the co-main event that features Devin Haney meeting Jorge Linares in a lightweight clash.

England’s Cameron is fighting for the first time outside of the United Kingdom and will be facing one of the craftiest American fighters of all in Hernandez. The Puerto Rican fighter is the last to defeat Layla McCarter back in 2007. Take my word, that is a tremendous accomplishment. It’s the new school versus the old school. Don’t miss this match. DAZN will be streaming it if you can’t buy a ticket.

Later, on June 19, a fight between WBO super featherweight Mikaela Mayer and Argentina’s Erica Farias is tentatively scheduled at the Virgin Hotel in Las Vegas. It’s the co-main event with Japan’s Naoya Inoue in a unification battle for the bantamweight titles with Michael Dasmarinas.

Early in July, flyweights are taking center stage with rumors that Seniesa “Super Bad” Estrada will be one of them supposedly in Los Angeles, California.

Because California has successfully vaccinated more than 50 percent of the population, that opens the doors to the large outdoor venues.

Women’s boxing seems to be leading the way.

Rebecca Hawker (3-0) won by technical knockout over Amanda Klein (0-2) in the seventh round on Saturday May 15. The Australian featherweight title fight took place at Mansfield, Queensland.

Bree Howling (3-0) won by majority decision after four rounds versus Erika Hernandez (5-7-1) on Saturday May 15. The super bantamweight bout was held at Quebec.

Natalie Zimmermann (5-0) was the winner by decision over Tiziana Olmo (0-1) after four rounds on Saturday May 15. The lightweight bout took place at Rostock.

Cecile Forstner (2-0) defeated Oluwafunke Fagbule (0-5) by decision after four three-minute rounds on Saturday May 15. The featherweight fight was held at Landau. Also, Bilgenur Aras (6-1) knocked out Nana Dokadze (1-7) in the third round of a featherweight contest.

Stephanie Silva (2-0) won by decision over Judit Hachbold (5-11) after eight rounds on Saturday May 15. The flyweight match was held at Roma.

Zulina Munoz (53-3-2) won by split decision over Isis Vargas (8-3) after eight rounds on Saturday May 15. The bantamweight fight took place at Mexico City.

Gentiane Lupi (7-3-1) defeated Ariane Nicholson (1-2) by technical knockout in the third round on Saturday May 15. The welterweight match was held at Tauranga.

Ewa Piatkowska (16-1) won by unanimous decision after six rounds versus Judy Waguthii (17-10-4) on Friday May 14. The welterweight match was held at Szegli.

On Friday May 21, light flyweights Sarah Bormann (12-0) and Catalina Diaz (6-4) meet 10 rounds for the WIBF and GBU titles at Belgrade.

Ellis Hopkins (1-0) beat Borislava Goranova (11-65-4) by decision after four rounds on Saturday May 15. The super welterweight bout was held at Manchester.