Chantelle Cameron vs Melissa Hernandez in Las Vegas
Written by: David A. Avila 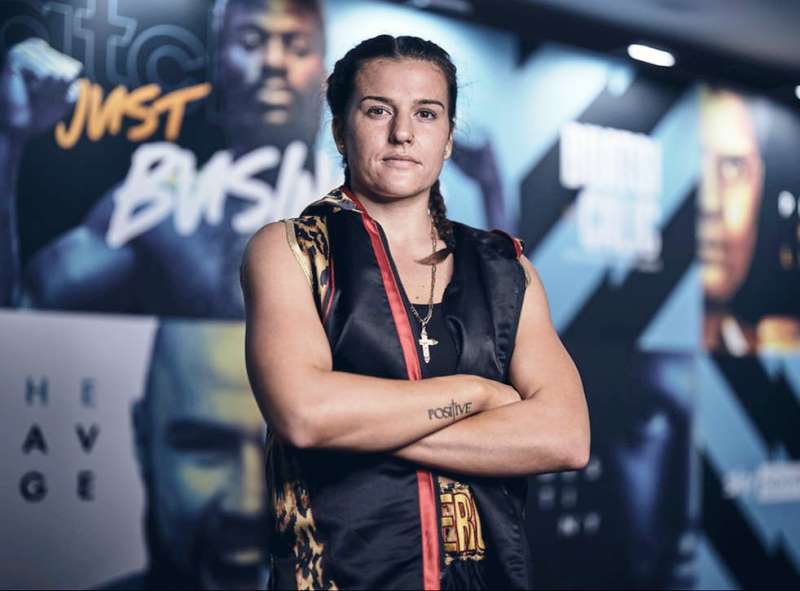 England’s Cameron (13-0, 7 KOs) is betting she has more than enough of everything including firepower to dismiss the experience of Hernandez (23-7-3, 7 KOs) when they meet Saturday May 29, at the Mandalay Bay Resort and Casino. DAZN will stream the title fight.

“Everyone is so desperate to stay undefeated, but this is a sport, we all have to climb the ladder and if you are that good, then boxing anyone – that’s my mentality. If I become undisputed and someone is calling me out and they’ve proved themselves, let’s take the fight,” said Cameron about fighting Hernandez a feared veteran.

Backed by a solid amateur career Cameron shot up the rankings and within a year was able to win the IBO world title in just her fifth pro fight. Most of those wins were the result of a knockout.

Puerto Rico’s Hernandez has long been one of the more avoided fighters. Her last fight was two years ago and during that match she dominated another new age fighter. She proved that her experience could neutralize anyone even a young undefeated fighter.

Because of the pandemic women prizefighting has taken a few steps forward with Matchroom Boxing showcasing female fighters like Katie Taylor, Terri Harper and Cameron more than ever before.

A few weeks ago Matchroom was able to promote a fight card in Arlington, Texas that drew more than 73,000 fans. Millions of fans watched on DAZN that event that pitted super middleweights Saul “Canelo” Alvarez and England’s Billy Joe Saunders. It was proof that European fighters versus North American fighters can draw.

Cameron has lofty goals and knows that beating Hernandez adds immense credibility to her resume. Maybe not to the casual fight fans but to experts and members of the prizefighting community a win over the “Huracan” adds pizzazz.

For more than 13 years Hernandez has matched skills with many of the best fighters in countries around the world. Like many of her era, she chased opportunities wherever and whenever they appeared. Canada, Panama, Argentina against world champions and contenders was never a deterrent. Champions such as Jelena Mrdjenovich, Erica Farias and Marcela Acuna all exchanged blows with her. She never turned down fights against top competition.

When vastly skilled Layla McCarter was unable to find anyone willing to face her, she usually resorted to asking the equally skilled Hernandez. It was Hernandez who last defeated McCarter back in 2007. They fought four times.

Unable to find opposition for more than $1,200 she retired. Then returned when offers appeared.

Now here she is fighting Cameron for the world title.

The arrival of female boxing competition to the 2012 and 2016 Olympics changed the women’s prizefighting world. Matchroom signed multiple fighters starting with Ireland’s Katie Taylor and now they have an extensive roster of top talent.

Cameron’s signing with Matchroom has allowed her to sit back and instead of chasing the competition. Now with the world title in her hands she feels in a comfort zone that allows to prepare for all comers.

“I used to have to chase people for fights but now I have the green and gold belt, I am the target,” said Cameron. “I feel good being the target.”

2-Min Round: Hooks and Jabs on the Female Fight World (radio/podcast)

The guests this week are WBO and WBC super middleweight titlist Franchon Crews-Dezurn and promoter Terri Moss. This episode will take place on Wednesday 7:30 p.m. PT instead of the normal Thursday night.

Crews-Dezurn is scheduled to meet WBA and IBF super middleweight titlist Elin Cederroos for the undisputed world championship on June 19, at LoanDepot Park in Miami, Florida. The Triller.com match will be shown on pay-per-view on the undercard of Teofimo Lopez vs George Kambosos for lightweight world championship.

Moss will be staging a Buckhead Fight Club boxing card on June 19, in the Atlanta, Georgia area. The former world champion boxer has been promoting fight cards for a number of years now. She will be our second guest on Wednesday May 26.

Valle was supposed to headline a major title fight in her hometown San Jose, Costa Rica but that country was shut down due to the rising pandemic numbers. It’s been switched to the Pico Rivera, Calif. a small suburban town 20 miles east of Los Angeles.

Also scheduled to participate on the same boxing card is super flyweight contender Adelaida “La Cobra” Ruiz who is based in L.A.

Expect L.A. to Sizzle in July

Anything can happen when it comes to staging fight cards during a pandemic, but inside sources at Golden Boy Promotions are pointing to a Japan versus USA boxing card.

WBA minimum weight world titlist Seniesa Estrada of East L.A. will be moving up a weight division to face WBO light flyweight titlist Tsunami Tenkai of Japan, if all goes according to Hoyle. The clash of champions is slated for Banc of California in Los Angeles on Friday July 9.

It’s USA versus Japan and it won’t be easy for anyone.

On Saturday May 29, bantamweights Eva Voraberger (25-7) and Vanesa Taborda (10-12-3) meet 10 rounds for a regional title at Deutschlandsberg.

On Saturday May 29, super lightweights Urguya Us (0-0) and Nancy Faure-Geors (0-0) meet four rounds at Liege.

Jessica Schadko (9-1) won by technical knockout in the second round over Katarina Vistica (1-18) on Saturday May 22. The welterweight bout took place at Bayern.

Mariana Juarez (55-10-4) knocked out Alejandra Soto (7-6-1) in the fourth round on Saturday May 22. The bantamweight fight took place at Mexico City.

Sarah Boorman (13-0) won by unanimous decision after 10 rounds versus Catalina Diaz (6-5) on Friday May 21. The minimum weight title fight was held at Belgrade.

Ema Kozin (21-0-1) won by technical knockout in the second round versus Radana Knezevic (2-8) on Saturday May 22. The middleweight bout was held at Ptuj.

Dilara Yucel (6-0) defeated Svitlana Vaskevych (0-3) by stoppage in the first round on Wednesday May 19. The welterweight match was held at Kiev.