Chantelle Cameron Wins in Las Vegas and More News and Results
Written by: David A. Avila 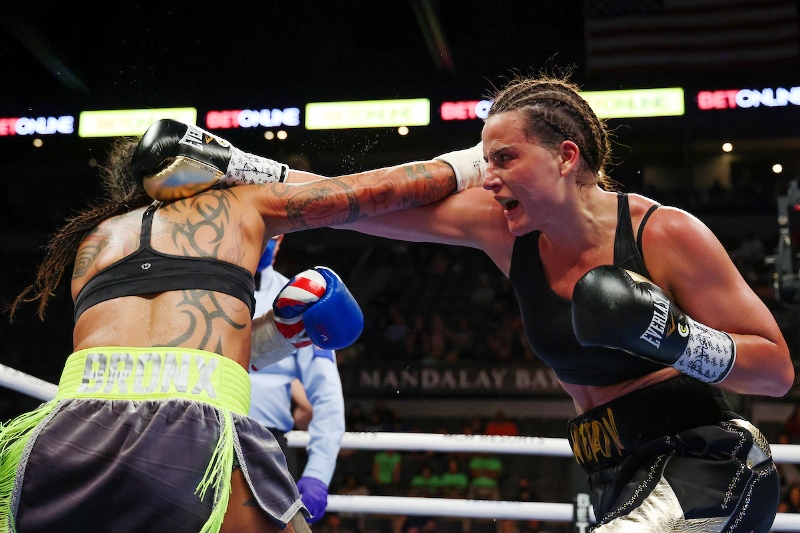 Despite a dubious stoppage by the referee, England’s Chantelle Cameron proved to American audiences she can dominate on both sides of the Atlantic Ocean with a win over Melissa Hernandez.

Although the referee shockingly ended the fight on a bad note, Cameron was able to showcase her own blend of talent.

Cameron jumped ahead from the opening bell with speedy combinations from the outside that Hernandez seemed slow to avoid. Jabs were snapping back the smaller fighter’s head as she awkwardly tried to counter from too far a distance.

In the second round Cameron continued the assault and though Hernandez seemed to avoid most of the blows, she was still taking too many. But a few counters from the Puerto Rican fighter connected.

After absorbing blows in the first two rounds, Hernandez seemed to shake the rust off her defense. She was able to slip blows and find her footing. But Cameron still had her combinations from a distance working in smooth fashion. It was a much better round for Hernandez but not enough to get the nod on the score card.

In the fourth round Cameron stepped on the gas and powered her way to force Hernandez against the ropes. A furious exchange of blows were unloaded and Hernandez seemed to go down. It was difficult to determine if it were from a blow or that she was forced down by Cameron’s body. The referee called it a knockdown and Hernandez looked at him with surprise. After the count, both fighters exchanged freely until the bell ended the round.

Both fighters took their chances going for the knockout and both survived.

Hernandez seemed more animated after surviving the assault by Cameron. So when the fifth round began it seemed like the fight would get much more interesting. At 41 years old the Puerto Rican fighter had been in previous scrapes like this where she had survived early onslaughts by her foes like Chevelle Hallback and Layla McCarter and emerged with a victory or draw.

Could this be one of those type of fights? We will never know.

Both fighters began exchanging blows in the fifth when Cameron shot out a lead right to Hernandez’s head. It backed her up a step and suddenly the referee jumped in and stopped the fight. It was a very bad stoppage at 1:38 of the fifth round by referee Celestino Ruiz. Hernandez was dumbfounded. The crowd booed.

The former multi-division winner Hernandez was not able to test the new breed of fighters in Cameron. There was no opportunity to take the strong British fighter into deep waters. The referee took that away.

But Cameron did show more than just youth and power, she displayed ring smarts in not engaging fully against the veteran Hernandez. Instead of a full-out attack, the British fighter fired three-punch combinations and never fell into the traps that Hernandez tried to set. It was intelligent fighting by Cameron.

Too bad the referee did not let the fight play out.

Segolene Lefebvre (14-0) won by unanimous decision after 10 rounds versus Jasmina Nad (11-24-5) on Friday May 28. The WBC Silver super bantamweight title fight was a held at Douai, Nord.

Michelle Klich (2-0) knocked out Vera Kubickova (0-1) in the first round on Friday May 28. The bantamweight match was held in Berlin.

Michiko Abiru (3-5) won by unanimous decision after four rounds against Saki Horiguchi (1-4-1) on Friday May 28. The flyweight bout was held at Tokyo. Also, Nana Hamashita (1-0) won by technical knockout in the second round over Ai Sugimoto (2-2) in a bantamweight fight.

Wendellin Cruz (5-0-1) won by knockout in the second round over Ninoska Morales (0-3) on Friday May 28. The super bantamweight fight was held in Managua.

Angelika Krysztoforska (1-0) knocked out Oliwia Bednarczyk (0-1) in the second round on Sunday May 30. The bantamweight fight was held at Stezyca.

Alana Karaeva (1-0) knocked out Ekaterina Kochkina (0-1) in the first round on Thursday May 27. The featherweight match was held at Vladikavkaz.

Gabriela Timar (6-0) won by unanimous decision after eight rounds versus Claudia Ferenczi (20-78-8) on Saturday May 29. The light flyweight fight was held at Basel.

Anastasia Kovalchuk (1-0) won by technical stoppage in the second round over Kamila Mkhavilla (1-3-1) on Tuesday May 25. The super bantamweight fight was held at Uman.