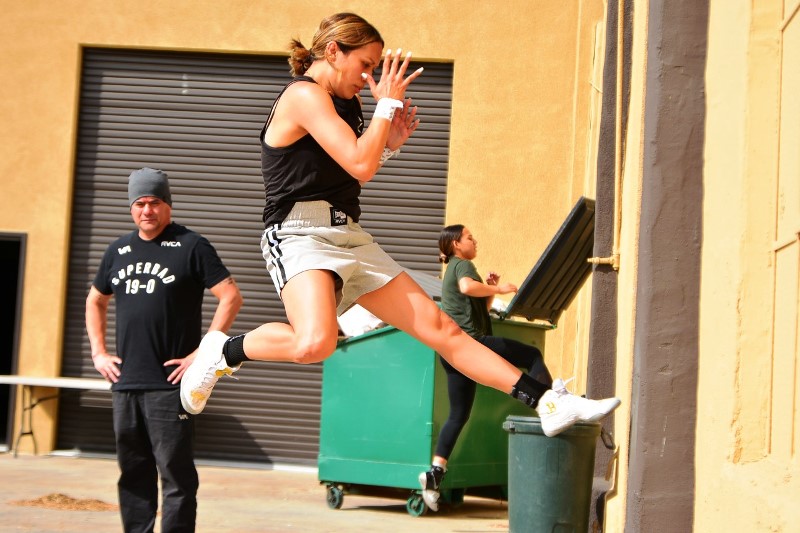 As Seniesa “Super Bad” Estrada scales effortlessly up a warehouse wall it’s a reminder that she’s not a normal human being. She’s a world champion hungering for even more challenges.

“I want to prove I’m one of the best fighters ever,” says Estrada calmly.

Born and raised in East Los Angeles, the current undefeated champion Estrada (20-0, 8 KOs) moves up a weight division to challenge WBO light flyweight titlist Tsunami Tenkai (28-12-1,16 KOs) next month on July 9 at the Banc of California Stadium in Los Angeles.

Tenkai is considered by many among Japan’s best all-time. The land of the rising sun has long been a dominant force in women’s prizefighting for decades. And Tenkai along with Naoko Fujioka are Japan’s best fighters and both are coming to Los Angeles.

WBA flyweight titlist Fujioka will be facing Sulem Urbina of Arizona on the same July 9 fight card in L.A.

So why fight one of the most dangerous fighters in the world in a heavier weight division?

“I’ve always fought girls bigger than me,” said Estrada. “I like challenges.”

The mere mention of Tenkai sparks a smile from the bronze skinned Estrada who pauses during her running and jumping workout to answer questions.

Talking to the media comes easy for Estrada who has been a focus for journalists since she was a pre-teen showing up in tournaments held in places like South-Central L.A. and East Los Angeles. She was a diminutive pig-tailed girl with boxing gloves larger than her head and simply stood out in amateur tournaments where boys dominated.

Back in the early 2000s the Los Angeles Times wrote a feature series on Estrada and her father Joe Estrada as they navigated through the amateur boxing circuit. At the time girls boxing in the amateurs was still a novelty. It just wasn’t done.

Here was an impish looking girl from East Los Angeles barrios determined to crack into the boxing world dominated by the boys and men. Along with her father Joe Estrada they circulated around gyms near their home looking for sparring. Few girls were available so she exchanged blows with other kids who would later become champions like Jojo Diaz, Frankie Gomez and Jonathan Navarro.

Because of a dearth of female competition back in 2005, the Estradas would search for tournaments where girl boxers near her weight class might be showing up.

“My dad and I would travel across the country,” said Seniesa Estrada remembering their early journeys in boxing. “He would make calls and research everywhere to find me fights.”

Often the Estradas would venture to other states only to find the expected competition was too big or weighed more than they claimed.

“We had to put rocks and keys in Seniesa’s pockets and weights around her legs so she could make the heavier weight and fight,” said Joe Estrada the father when remembering weigh-ins 16 years ago. “That’s if they allowed her to weigh with her clothes on. Sometimes they would make her take off her sweats.”

But once the actual boxing took place, despite her diminutive size, she often demoralized the competition with her quickness, agility and skill. She always could fight.

As a child Seniesa always loved to watch prizefighting on television. One fighter Roy Jones Jr. caught her eye with his flair and speed. She also enjoyed watching Sugar Ray Leonard and Oscar De La Hoya on television. She picked up moves and feints by watching the men and adapted some moves and invented others.

“She always fought the way she does,” claims Joe Estrada. “She developed most of her moves early. Then her trainer added others.”

Other girls who boxed were trained in more traditional straight up styles and did not like sparring with Seniesa. Traveling from gym to gym for sparring was a part of the boxing life.

In East Los Angeles there are no secrets in the boxing world and Seniesa Estrada was very well known to all who laced up boxing gloves in the 10 square mile area..

Ten years ago, Seniesa Estrada entered the prize ring for the first time when she fought a girl from Texas named Maria Ruiz. It took place at the Chumash Casino in Santa Ynez, California. She won.

A foot injury, cancelled fights, and lack of interest by promoters in women’s boxing prevented Seniesa Estrada from obtaining another fight for three years. So she trained and trained.

“I would feel sorry for Seniesa because she always trained hard,” said Dean Campos, who’s trained Seniesa Estrada for more than 12 years. “Sometimes I would show my guy fighters moves and they couldn’t do them. So, I would ask Seniesa to show them.”

After several years of scouring the boxing landscape for opportunities to enter the prize ring, Estrada was given trial runs with promotional boxing giant Golden Boy Promotions starting in 2016.

The boxing company saw an impressive display of Estrada’s skills against Anahi Torres at the StubHub Center in September 2017. It was a convincing win and the fighter known as “Super Bad” Estrada was signed to a contract by Oscar De La Hoya’s company in January 2018.

“It was the best feeling because I didn’t have to worry about looking for fights. All I had to do was train and get ready,” said Seniesa Estrada.

After a solid win over Sonia Osorio by decision, the next five opponents for Estrada ended by knockout. Then came the showdown with Golden Boy’s other signee Olympic bronze medalist Marlen Esparza and Estrada won a bloody war in Las Vegas.

The world was captivated.

Next came an even more captivating moment when Estrada met undefeated Miranda Adkins who had five wins and five knockouts. Nobody knew what to expect. Estrada entered the prize ring at Fantasy Springs Casino and when the bell rang, she shot out like a Black Mamba and delivered a sizzling combination that left her foe unconscious. It took only seven seconds.

Millions watched replays of the knockout on social media sites over and over again.

This past March, Estrada entered the prize ring for her first opportunity at a world title. Champions had avoided her for years, but Mexico’s Anabel Ortiz has a reputation as being one of that country’s most fearless fighters. She accepted the fight to defend the WBA minimum weight world title on March 20 in Texas.

Ortiz fought valiantly against the nimble and always attacking Estrada. After a first round knockdown the Mexican fighter tried every trick she knew to remain upright. After 10 mostly one-sided rounds Estrada was named the winner by unanimous decision. Finally, she had won a world title.

“Winning this title is amazing,” said Estrada. “It motivates me more to get back to the gym. There’s more titles to get.”

Next up will be Tsunami Tenkai the WBO light flyweight world titlist from Japan. She’s a veteran who fought all over the world and has never been stopped. Never. It’s Estrada’s most capable and dangerous foe yet.

“She’s always been this way ever since she was a little girl,” said Joe Estrada.

In one month, Seniesa Estrada seeks to captivate the world once again.