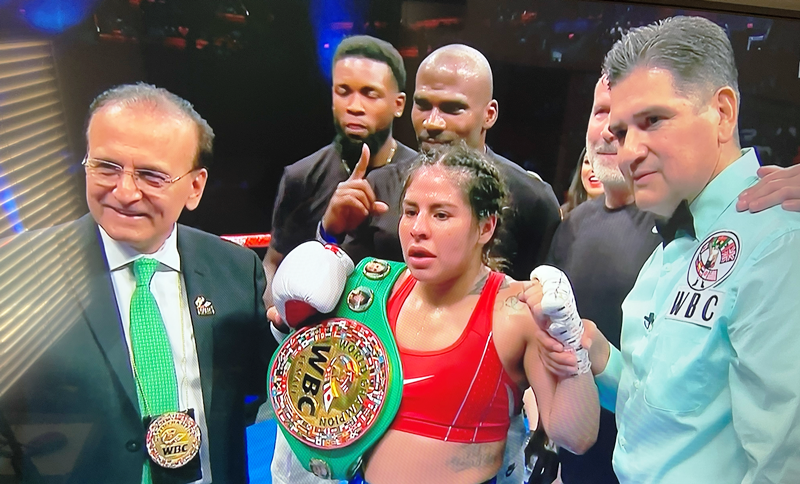 In an all-action back-and-forth war and candidate for fight of the year, Houston, Texas’ Marlen Esparza survived an early knockdown to win a close and perhaps controversial unanimous decision over long-reigning veteran Ibeth “La Roca” Zamora (32-7, 12KO) for the WBC flyweight title on Saturday in El Paso.

Esparza (10-1, 1 KOs) proved to the Texas judges in a 10-round world championship fight that she was the superior fighter over Zamora (32-7, 12 KOs) to take the WBC title away from the Mexican veteran, It was part of the DAZN televised undercard for undefeated middleweight Jaime Munguia vs. Kamil Szeremeta.

Judge Daniel Sandoval scored it 97-92 while both Wilfredo Esperon and Lee Rogers saw it a closer 95-94 and 96-94 respectively, all for Esparza.

The fight marked the 31-year-old Esparza’s first opportunity for a recognized world title and was coming into the ring off a six round unanimous decision over the over matched Shelly Barnet last March.

The much more experienced Zamora of San Cristobal Huichochtitlan up in the mountains of central Mexico state is a recognized veteran despite only being a year older than Esparza.  Coming into the fight she was 12-3, 5KO in world championship fights and was on a five-fight win streak since her last loss back in 2017.

“It was difficult, she throws a lot,” Esparza said minutes after the fight among scattered boos in the Don Haskins Center in El Paso, Texas.  “I understand why people would think she is aggressive, but she wasn’t aggressive.  She wasn’t landing but it looked like she was landing.”

Esparza wasn’t shy to get up close as soon as the bell rang to start the championship fight, running across the ring to meet the slightly shorter Zamora near her corner.  The 2012 Olympic bronze medalist Esparza was quicker fisted as she landed two punch combos as she darted in and out.  Zamora, who was in her United States debut, looked a bit shocked at how Esparza landed so easily.  With about 30 seconds to go in the opening stanza, Zamora caught Esparza with a looping wide over hand right to the chin that sent Esparza down for her first knockdown as a professional.

“That was the only thing she did different from what we prepared for, that first shot.  She is a very good opponent,” Esparza said of the knockdown.  “I was talking to God back to the corner.  This is what we are doing and this what we trained for.  Quiero ganar, I want to win all the belts. That was what I was thinking.”

Esparza ran out again in the second and third round and controlled the action with her superior boxing skills.  She was clearly the faster more precise fighter inside the ring, but Zamora seemed to be only baiting her time as she landed sporadically to the body as soon Esparza was near enough.

For the next couple of rounds Zamora was able to land cleaner and more often as Esparza slowed down and stayed in the pocket for a bit longer than in the beginning of the fight.  Zamora’s experience and style began to surface as she just kept punching, landing slow but effective punches to the body, arms and not as often, head of Esparza.

Esparza remounted for the next couple of rounds fighting from a distance that benefitted her and landing her educated jab.  Esparza continued to pot shot Zamora as the Mexican veteran would plod in and look to keep landing to the body.  She did at times but Esparza seemed to catch her second wind and stayed away from the inside.

Zamora was relentless despite being out-landed but not out-worked.  As Esparza began to slow down even more in the eighth, “La Roca” kept coming looking to land any punch anywhere on the body of her opponent.  In the ninth Zamora kept punishing the body slowing down Esparza even more.

With her energy waning, Esparza on the suggestion of her corner, believed the fight was over after the ninth round, celebrating with her hands up and her corner failing to bring out the stool for the tenth round.

“I had to re-calibrate but I have been doing that since April,” Esparza answered when asked if the mistake affected her.  “They could have told me I had to fight 12 rounds and I would have done it; you just have to suck it up.”

In the tenth and final round, Zamora kept coming, throwing punches as Esparza tried to keep from harm’s way.  Zamora as expected just kept throwing punches with the majority of them landing to the body of Esparza as the Houston native returned fire but not with the same intensity as the champion.

“I want all the belts,” she said when asked what is next.  “If it is not a world title eliminator or title fight, I don’t want to hear or know about it.  We’ll get to Seniesa (Estrada) if she is in the line, then she is in the line.”