Naoko Fujioka and Tsunami Tenkai Ready to Defend Titles in USA
Written by: David A. Avila 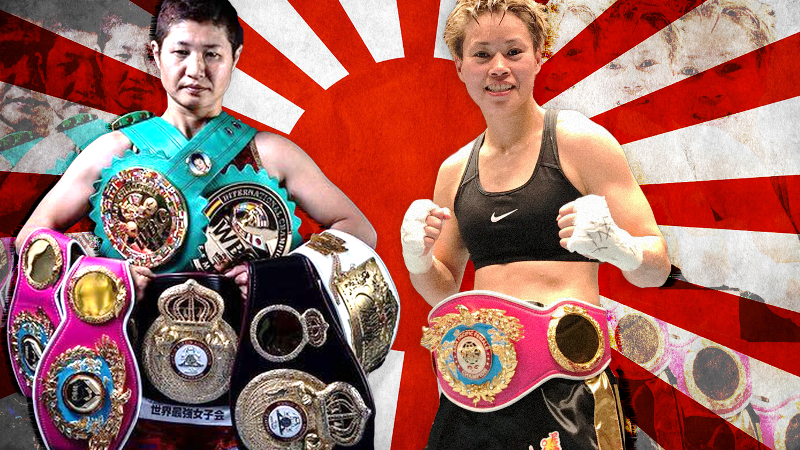 In less than two weeks Japan versus USA will take place in Los Angeles.

The state of California recently declared that sporting events including boxing can have full capacity seating.

Big-time boxing is back in California.

The two female world title fights are part of the Golden Boy Promotions card that includes Gilberto “Zurdo” Ramirez versus Sullivan Barrera; Jojo Diaz vs Javier Fortuna and several other bouts. DAZN will stream the card.

It’s not an exaggeration to say Naoko Fujioka has been Japan’s best female fighter in history. She has won world titles in five different weight divisions from minimum weight at 102 pounds to the 118-pound bantamweight limit. Many boxing publications consider her one of the top fighters pound for pound in the world.

Fujioka has been eager to perform in front of American audiences for years. She finally gets her wish and will meet flyweight contender Sulem Urbina whose only loss was against new WBC flyweight champion Marlen Esparza.

At 45, has Fujioka lost too much to age?

The last time Fujioka lost was in 2016 to Jessica Chavez in Mexico. On the same note she defeated the great Mariana “Barby”Juarez in Mexico back in 2015. That’s an incredible feat.

Urbina has extensive amateur experience and shown an ability to fight moving forward or while in motion. It’s a big moment for her to challenge for the world title.

Tenkai Tsunami is the other Japanese fighter of prominence. Many say she is equal to Naoko and it’s hard to argue when both fought each other to a draw two years ago. She is a fiery boxer who uses aggressiveness or boxing ability with equal flare.

After numerous losses to talented opposition Tenkai has found her footing and has not lost a fight in four years. This is her first visit to the USA.

Seniesa Estrada has been amassing a reputation in Los Angeles for decades. First as an amateur with a unique style and then proceeding to burn through the professional fight world with eye-popping abilities.

Though she recently captured the WBC minimum weight title, she hungered for more competition and when no other minimum weights stepped forward, she eagerly accepted to move up a weight division to face the dangerous Tenkai.

It easily has the potential to be the Fight of the Year. In fact, both female title fights have potential to grab the eyes of the world. The last time two women’s world title fights were on the same card in Los Angeles was December 8, 2018. On that day Claressa Shields and Femke Hermans fought for the WBA and WBC middleweight titles. And Cecilia Braekhus and Aleksandra Lopes fought for the undisputed welterweight championship. It was also the last time HBO televised a boxing card.

Japan is sending its two best fighters and the USA counters with two of its best.

Fireworks for sure. Golden Boy Promotions is going for the homerun with this card.

Spain’s dynamic Joana Pastrana called it a career and announced she is retiring from prizefighting.

“This is a farewell to boxing but for all of you who follow me, I have to tell you this is not a goodbye to Joana Pastrana,” she said.

Florencia Villalba (1-0-1) and Dayana Loyola (0-0-1) fought to a split draw after four rounds on Saturday June 26. The flyweight contest was held at Cordoba.

Veronica Zuluaga (2-0) won by first round knockout over Mileydis Mercado (0-2) on Saturday June 26. The bantamweight fight took place at Puerto Colombia. Also, Paulino Angel (2-0) knocked out Mirleydis Hoyos (0-3) in the second round in their super bantamweight bout.

On Thursday June 29, super flyweights Tomoko Okuda (7-2-2) and Miyo Yoshida (14-2) meet for the WBO super flyweight world title at Tokyo. This is a rematch. Their first encounter ended in a technical decision win for Okuda last December.

Yamileth Mercado (18-2) won by unanimous decision over Angelica Rascon (10-1) after 10 rounds on Saturday June 26. The WBC super bantamweight title fight took place at Chihuahua. It was Mercaco’s second defense of the title.

Matshidiso Mokebisi (14-8-1) won by technical knockout in the fifth round versus Bonita Van Jaarsveld (5-3-2) on Saturday June 26. The lightweight match was held in Soweto.

Anastasia Kovalchuk (2-0) knocked out Maryna Savchuk (0-1) in the second round on Saturday June 26. The super bantamweight fight was held at Uman.