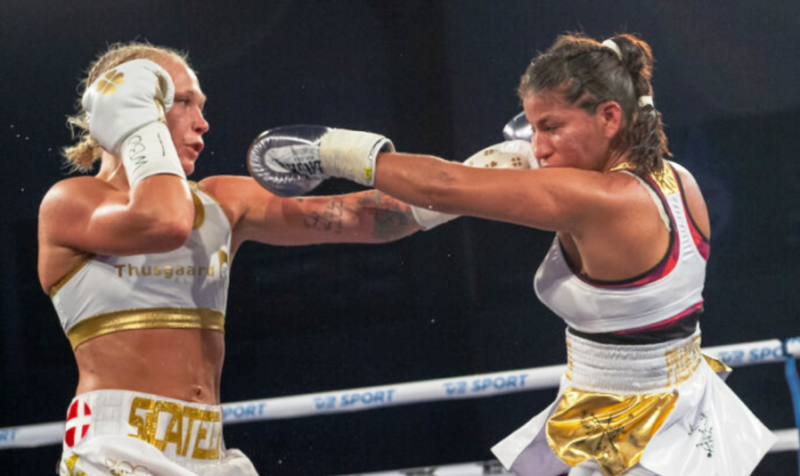 After new WBO Bantamweight Champion Dina Thorslund moved down a weight class to earn the vacant belt with a comfortable win over well-experienced Jasseth Noriega, Thorslund can definitely be classified as one of the finest boxers, female or male, ever to hail from Denmark.

She and Noriega maintained plenty of punching activity in most frames, but there was not very much dramatic action overall in what was more of a tactical battle than a two-way brawl.

“It was a long struggle to get here, but winning is the icing on the cake,” said Thorslund afterward. “I wanted to stay calm. I expected her to attack more but she didn’t, so I had to force the pace.”

From Mazatlan, Mexico, Noriega (27-5-2, 5 KOs), was a happy conking character all of fight week and smiled broadly throughout, even after taking a fifth round knockdown. The visitor displayed deceptive toughness, but she was actually an ideal foe to showcase Thorslund’s skills, especially the champion’s sharp combinations.

Both women were somewhat tentative in the opening frames. Thorslund stayed on her toes and used her height advantage to work inside while Noriega came at her with wide, awkward looking but still accurate hooks from shoulder level. Referee Bence Kovacs continually warned the fighters about accidental head butts that occurred multiple times.

Thorslund was more effective during the middle rounds with some good body shots. Noriega absorbed them well, but that kept her from mounting any effective offense of her own as Thorslund piled up points.

Noriega was more aggressive in round 5, but she left herself open using a low-armed, jabbing stance. As she hurled wide hooks and tried to move in, Thorslund responded with a fine sequence of crosses, topped off by a clubbing right that dumped Noriega to her knees, more surprised than hurt. She quickly sprawled forward and pushed herself up, perhaps trying to indicate a slip. Thorslund got in a couple more rights but was content to pick her shots as Noriega motioned her to move in. It seemed like a missed knockout opportunity.

Noriega kept trying to rally and managed to back Thorslund up as the rounds progressed, but she couldn’t gain momentum even when she caught Thorslund in a corner. The only question about the one-sided result was whether it was a shutout, and all the judges (Mikael Hook, Zoltan Enyedi, Jan Christensen) agreed that Noriega only won one session for a score of 99-90.

The bout was held in a packed Struer Arena, where Thorslund has made six of her last nine appearances. Her cheerfully rocking hometown fans filled the place with a blaring buzz of vuvuzelas, more typically heard at soccer matches. The sound fit in well during these days of the European football tournament and made for a big sporting weekend in Denmark.

Italy, Courtenay and Beyond

This was probably the best the 27-year-old Thorslund has looked so far as a pro. She trained in Assisi, Italy and worked out with a number of amateurs who were preparing for the Olympic qualifications there, including three women who made the Italian Olympic Team.

“The Italian Boxing Federation had a super training situation that we could learn a lot from back home,” Thorslund posted on social media. She also admitted that not all the sparring went so well for her, sharing a picture that displayed more facial marks than she gets from her typical pro matches.

Italy also marked a road trip for Thorslund’s team. There was a Covid 19 infected passenger on her last flight and she had to self isolate for six days so this time she drove over 1,200 miles as a precaution.

What comes next for Thorslund could be a much higher profile challenge and a rare assignment outside Denmark, but the focus of her trajectory is uncertain as the relatively young mother tries to balance family and career.

Much of the boxing related speculation was centered around a possible faceoff against the UK’s Shannon Courtenay, who’s the same age as Thorslund but has just half as many pro fights.

“I’m not impressed by Courtenay at all,” said Thorslund prior the Noriega fight. “She has the WBA belt and that’s the one I want after this. We’ve been pushing for this fight for a long time but she seems to not want it. It would be a big fight, but I will take her out easy.

“She knows I will beat her very easy and that’s why they don’t want it. I hope MTK Global and Matchroom can make it happen.”

That sounds like a fighter with definite goals about future contests, but just prior to meeting Noriega a revealing interview with sponsoring Danish broadcaster TV2 indicated Thorslund was also contemplating retirement, sooner not later, and that the Noriega fight could be her grand finale.

“I’m considering the end of my boxing career,” Thorslund told TV2. “I can’t continue to live so urgently. I want to retire while I’m still on top and that motivates me. I know my career will be over in a little while so I want to excel at the end.”

“For now, I don’t need to stop fighting,” she said. “I just need to find how to put my family and my fighting (goals) together in a different way.”

Whatever develops, it should be clear to anyone who’s followed Thorslund’s fistic development that her performance against Noriega showed an athlete in her prime. While it would be quite interesting to see how much she can achieve in boxing, the next move should an entirely personal decision.