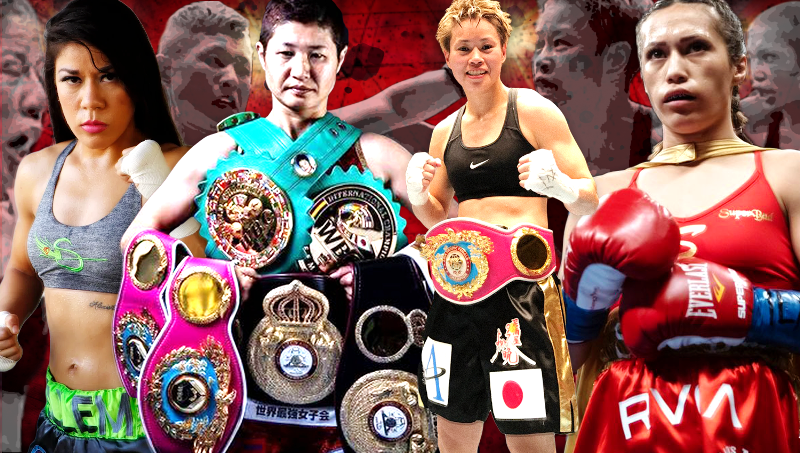 Summer Jam in LA: Japan vs America and More News

American fight fans get a first-time glimpse of Japan’s best female fighters this week as WBA flyweight champ Naoko Fujioka and WBO light flyweight titlist Tsunami Tenkai have arrived and are ready for this country’s best.

Stepping up against the Japanese duo will be Seniesa “Super Bad” Estrada meeting Tenkai and Sulem Urbina facing Fujioka in a USA versus Japan scenario on Friday July 9, at Banc of California Stadium in Los Angeles. DAZN and Facebook will stream.

It’s been 12 years since a female world champion from Japan has come to America to defend a world title. Back in 2009, Fujin Raika held various world titles and challenged Layla McCarter for the WBA lightweight world title she held. Their match took place in Las Vegas and saw McCarter win by unanimous decision after 10 rounds.

No other female Japanese world champion has fought here since.

During this last decade the Japanese fighters have dominated the lower weight classes and currently hold numerous world titles in their possession.

Fujioka has long been considered Japan’s best with Tenkai right behind her.

But America has always had talent too.

East L.A.’s Estrada (20-0) recently cracked the Top 10 Pound for Pound list by this publication and meets Tenkai (28-12-1) who could crack the list with a victory over the local fighter. Despite her numerous losses, Tsunami is as dangerous as her name.

Estrada recently defeated Mexico’s Anabel Ortiz for the WBA minimumweight world title a few months ago. Unable to secure a unification match with the other titleholders in that weight class, Estrada opted to move up in weight.

“I’ve always fought girls that were heavier than me,” said Estrada, who walks around at 105 pounds when not fighting. “I prefer fighting at 105 but I can fight heavier girls without a problem.”

Tenkai holds the WBO light flyweight title at 108-pound limit, and despite fighting all over the world has never fought in the USA. She is not coming to lose. Two years ago, she fought Fujioka to a standstill in a battle between Japan’s two best prizefighters. Can she hold off Estrada?

“I know Estrada is a good boxer,” stated Tenkai. “But I have my superior experience and skills through a 16-year career with which I wish to be victorious.”

Fujioka (18-2-1) who has been ranked on this publication’s Top 10 Pound for Pound list for many years, has conquered five weight divisions from minimumweight to bantamweight. She recently settled on the flyweight division. Now she faces Sulem Urbina (12-1) whose only defeat was by decision to current WBC champ Marlen Esparza.

“I have always wanted to show my skills in America,” said Fujioka. “This is where the biggest fights are held.”

Urbina has extensive amateur experience and was a member of Team Mexico. She lives in Phoenix, Arizona and recently battled Marlen Esparza. Though she lost by decision, she was simply out-pointed by the clever Esparza last October. In this match with Fujioka she expects to encounter a completely different style.

“Definitely it will be a great fight. Action-packed,” says Urbina.

History between Japan and LA

Years ago, Los Angeles was one of the first cities to stage world title fights between Japan and America. I actually witnessed one of those early confrontations at the Olympic Auditorium to see Sho Saijo battle Jose Pimental in a featherweight clash in February 1968. He later defeated Raul Rojas for the WBA featherweight world championship and successfully defended it against Pimental in Sapporo, Japan. Altogether he fought Pimental three times winning twice.

That fight opened the door for more confrontations between American and Japanese world champions.

This Friday marks the first time women will vie against each other in world title fights. Its an important moment made possible by Golden Boy Promotions who signed numerous top female fighters like Estrada, Urbina and Esparza. They also signed current unified world champion Franchon Crews-Dezurn and others like Anabel Ortiz, Arely Mucino and Ibeth Zamora.

Smaller weight classes are about to explode on the boxing scene. And why not? For decades Mexico, Argentina, Venezuela, Panama and Japan dominated the lower weight divisions. Now, the western region of the US is beginning to see more American girls in the lower weights.

Doors open at noon. For tickets go to this link: https://www.ticketsonsale.com/tickets/golden-boy-boxing-series-zurdo-vs-barrera-banc-of-california-stadium-los-angeles-7-9-2021-3630643

Speaking of Japan, last Tuesday in Tokyo, Miyo Yoshida (15-2) regained the WBO super flyweight world title by split-decision over Tomoko Okuda (7-3-2). It was a rematch. Okuda won their first encounter by technical decision after a cut suffered accidentally forced the fight to stop in the sixth round.

In the rematch Yoshida was able to avenge her loss and reclaim the title after making some changes. She is also eager to fight in the US and has sparred with some American fighters like Lissette Medal.

Evelin Bermudez (14-0-1) won by technical knockout in the ninth round over Tamara Demarco (9-4) on Sunday July 4. The IBF light flyweight fight was held at Santa Fe. Also, Roxana Bermudez (3-3-2) defeated Jennifer Meza (4-2) by decision after six rounds in a flyweight bout.

Janina Neumann (2-0) won by technical knockout in the second round over Lara Meyer (0-2) on Saturday July 3. The middleweight fight was held at Nordhein-Westfalen.

Valentina Bustamante (1-0) won by decision after six rounds against Aleksandra Ivanovic (0-3-1) on Friday July 2. The featherweight match was held at Asti.

Gabriela Fundora (2-0) won by decision after four rounds versus Indeya Smith (1-2-1) on Saturday July 3. The super flyweight bout was held in Los Angeles.