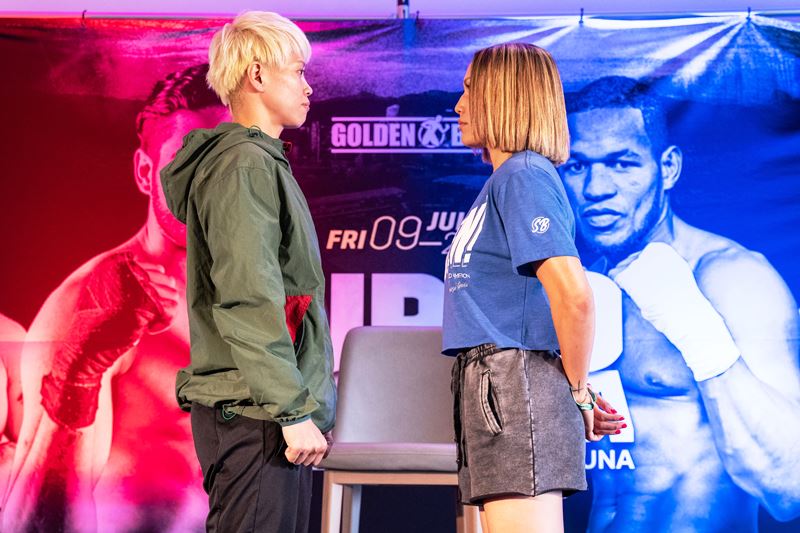 Seniesa Estrada vs Tsunami Tenkai on Friday in L.A.

After struggling in the beginning of her career, fighting sporadically and out of her weight class, East Los Angeles’ own Seniesa “Super Bad” Estrada (20-0, 8KO) has hit her stride since signing with Golden Boy Promotions back in 2018.

Coming off an impressive win over veteran Mexican world champion Anabel “Avispa” Ortiz last March for the WBA 105-pound world title, Estrada is poised to go for another strap against Japan’s Tsunami Tenkai (28-12-1, 16KO) this upcoming Friday, July 9th, at the Banc of California Stadium in downtown Los Angeles, CA.  The scheduled ten rounder will be for the WBO light flyweight world title.

The multi-bout fight card is presented by Golden Boy Promotions and televised on Facebook Live as well as the main card on DAZN.  In her next fight Estrada will be moving up one division but she explains she is comfortable at the 108-pound limit as well as at 105 pounds.

“108 and 105, I feel those two weight classes are natural weight classes for me,” she said recently in an exclusive interview with the 2-Minute Round, the all-female boxing podcast hosted by David Avila, Lupi Gutierrez and Felipe Leon.  “I have fought at 112 many times but that is not where I want to be just because I walk around at 112.  Making 108 and 105 is great, I feel great there, faster, stronger, that is where I should be.  I know at 112 the girls will be physically bigger but eventually I think I will fight there again.”

In her last fight, Estrada not only defeated the afore mentioned Ortiz fairly easily but also sent her to the canvas early in the fight.

“The training camp for that fight was great.  I was training for that fight for a long time,” Estrada explained.  “I was expecting to fight even sooner.  What I didn’t realize until after that fight is that I went into fighting for the world title after being out of the ring for about 16 months because that seven second knockout didn’t really count.  The last time I was actually in the ring was against Esparza.”

“I was definitely prepared because I was in training the whole time,” she continued.  “The game-plan for that fight was to make Anabel uncomfortable.  To control the pace because that is the way she is so successful, she controls the pace and the girls allow her to fight at the pace she wants to fight at.  I knew with my speed, timing and foot work, all that together, I was going to completely throw her off.  She is very comfortable moving to her left, that is her escape from punches in a fight, so I forced her to move to her right which made her very uncomfortable.  Taking her out of her comfort zone was the main thing in our game plan from the beginning to the end.”

Estrada explains during her camp her team and herself study not only the weaknesses her upcoming opponent might have but also her strengths and in the case of Ortiz, who she considers the best opponent she has faced until now in her pro career, the strengths were considerable.

Her strength is being very aggressive and throwing a lot of punches,” she said of Ortiz.  “In all her fights that I have seen, she is a punching machine, she does not stop from coming forward.  She is aggressive, she stays in there for exchanges.  I knew that would be one of her strengths.  I knew she would be durable and very tough.”

In her next opponent, veteran Tsunami Tenkai, 36, the 29-year-old Estrada expects another challenging fight to be topped off with yet another great performance.

I am just making sure I am perfecting the fundamentals,” she continued.  “Just doing certain things to make her pay for the awkwardness and the mistakes that she does.”

Like Mexican fighters, Japanese are known for their courage inside the ring and their willingness to receive punishment in the hopes of landing their own set of punches.  Estrada is well aware of what Tenkai can bring to the table and is ready for it.

“They are courageous, and she is very courageous,” she admitted.  “Japanese fighters can take a lot of punches; they take a lot of punishment.  Not in a bad way but in a good way, it shows how courageous they are.  They are willing to give their all.  Just from studying Tsunami, my prediction is that I am going to slowly break her down.  It can lead to a stoppage or her quitting in the corner, who knows?  I know mentally and physically I will be able to break her down because I am not going to allow her to control the pace or the things she is used to doing.”

One thing that is noticeable about Estrada recently is her willingness to mix it up on social media, something she was not engaging as much before.  Now she is willing to answer to anybody that is willing to call her out.

“Honestly, anybody that says anything about me, I try my best not to say anything,” she said with a laugh.  “It is hard to get under my skin or bother me. At a certain point I am going to say something.  I am from East L.A., of course I have that in me.  When you bring it out of me, it is not good.”

“I like to do my talking in the ring,” she admitted retrospectively.  “That is where I feel more comfortable.”