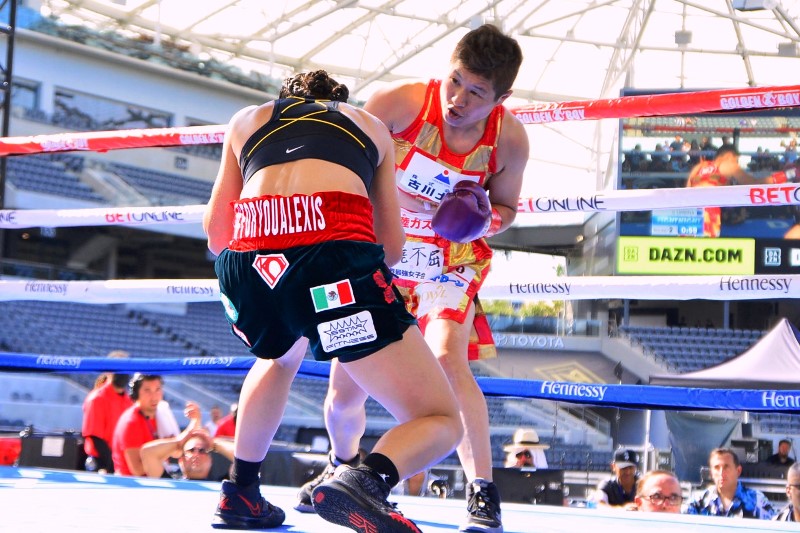 LOS ANGELES-The main event on the Facebook fights also the best fight on that portion with Japan’s mighty Naoko Fujioka and Sulem Urbina in a flyweight championship clash on Friday at the Banc of California.

Fujioka, the reigning WBA flyweight champion from Japan, remained victorious over her opponent Urbina of Phoenix, Arizona in her second title defense.

This was Fujioka’s first fight in the United States of America who, coincidently, fought Tsunami Tenkai in her last fight with a draw decision for both women.

Urbina’s first loss in her professional career and last opponent was Marlen Esparza who was sitting ringside watching.

Urbina was on a mission to obtain Fujioka’s WBA title belt, but the 45-year-old champion Fujioka was not going make it easy for her 31-year-old opponent. The opening rounds and continuing to the final bell, we saw the direction of the fight waver back and forth for both women.

The Arizona fighter opened up the fight popping combinations and sliding under and to the side of Fujioka’s counters. During the first two rounds it looked age and inactivity had caught up the five-division world champion fighting out of Tokyo.

“First round I did not look good in the ring, but I was OK and figured what to do,” said Fujioka.

Rounds three and four, Fujioka amped up her fight game and began to outwork her opponent, despite the power of Urbina’s uppercuts. The Japanese fighter easily walked right into her line of fire after gaining knowledge from previous rounds into the fight she also began targeting the body with thudding shots. Work to the body was key.

“I adjusted myself for the third and fourth rounds. I got to attack her body and it worked,” said Fujioka of her change in strategy.

Urbina matched Fujioka’s technique with her own and landed a double left hook into the body of the busier fighter. Urbina showcased her combinations on Fujioka but was met with an exchange of straight punches leaving her opponent’s face red to end the round.

During the second half of the fight Urbina landed single shots while Fujioka was landing multiple combinations especially to the body. And when she ventured upward Fujioka connected with bombs that were clearly knockout blows to other fighters but not to Urbina who did not slow down one bit.

It was a furious second half of the fight.

“I was so excited and happy that I finally fight in the US and especially I won,” Fujioka said. “I cannot thank enough to everyone who made this happen for me.”

Fujioka retains her WBA flyweight world title and later met with Marlen Esparza the new WBC flyweight champ who was analyzing the fight for Facebook viewers. Perhaps Fujioka will be matched with Esparza in a unification bout later this year.

Meanwhile, the five-division winner returns home with her belt. Urbina though unsuccessful in her first world title attempt showed tremendous abilities. Her performance was equally impressive.