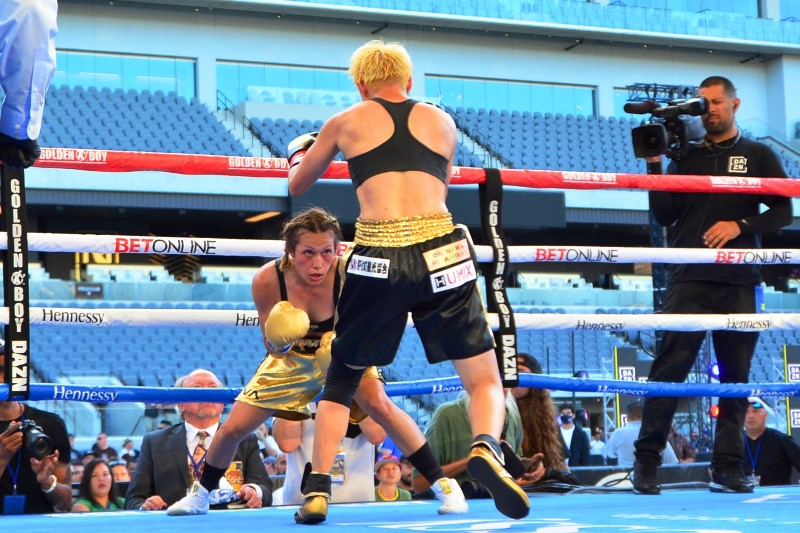 LOS ANGELES-It was a big night for women boxing Friday night at the Banc of California Stadium in Los Angeles, California. Golden Boy promotions put on a stacked card featuring many notable fighters from the Los Angeles area. Women’s boxing was spotlighted with two world title fights on the undercard.

Two powerful women boxers made their way from Japan to the United States of America and battled it out in the squared ring. One particular matchup featured two world champions going head-to-head.

Light flyweight champion, Tenkai Tsunami (28-13-1, 16 KO) held the WBO title belt coming into the 10- round light flyweight bout and had successfully defended it four times. But the final decision was unanimous for Estrada, who came out on top and obtained Tsunami’s title belt for the win.

But each round was savagely fought.

In the first round, we saw both women move around the ring as they tested the waters with each other. After a minute into the first round, only one fighter connected her powerful boxing combinations for a total of 16 punches versus Tsunami’s 1.

After seemingly gauging Estrada’s movements and tendencies Tenkai countered in-between the combinations. In one instance she stuck a stiff left jab that surprised Estrada. At the end of the stanza Tenkai unleashed her own five-punch combination.

This active energy continued on throughout the remaining rounds.

Moving into the third round, Tsunami moved forward, putting the pressure on Estrada but Estrada pushed back with an explosion of punches to get her off. The flurry of punches was heard throughout the stadium and the crowd cheered in approval for “Super Bad” Estrada to do her thing. But as expected, Tsunami kept coming forward as her name states.

Continuing onto the later rounds, Tsunami, the Japanese fighter, overwhelmed her opponent with power of her own and continuously stayed on top of Estrada. She posed a problem for the East Los Angeles native, “I didn’t feel her power, but it was harder to keep her off,” says Estrada who moved up in weight to take on this fight.

Around round seven, Tsunami landed connecting shots on her opponent, but this is where we watched as Estrada began to double down on her punishment. Hard body shots were delivered on the body of Tsunami that pushed her back into the corner. “I went to the body because she is the bigger fighter,” said Estrada. Tsunami responded with an uppercut that landed but Estrada used her defense to get out of her range.

Seldom had Estrada absorbed as many blows before in any previous fight. She was in elite territory and it was savagery at its best.

“I had to really dig deep and show that I can fight on the inside, exchange punches and work the body. I showed a different side to me,” said the East Los Angeles native.

Estrada continued the momentum of the fight by remaining to be the more active fighter. Estrada outlanded the veteran Japanese fighter, she punched 151 in total versus a mere 97. Per Compubox, Estrada landed 43% of her power punches.

After 10 rounds the 29-year-old LA native claimed the WBO light flyweight title belt after a competitive fight with unanimous decision win and scores of 99-91, 98-92 and 98-92. She also holds the WBA minimumweight title.

“Tsunami is really tough, and I was surprised at her ability to take a lot of punches,” said Estrada. “My plans are to become a three-division world champ. So, I want world title fights.”

Estrada said she wanted to become the undisputed champion at both divisions and is considering a rematch with a past opponent Marlen Esparza, who was ringside during the fight. “I know she wants to come here and witness greatness,” Estrada said, “She can learn something.” The continued friction between the two fighters seemed to continue on since their previous match but, Esparza responded with grace and a welcoming smile.

Even the post-fight comments were savage.