Amanda Serrano vs Yamileth Mercado in Aug.
Written by: David A. Avila 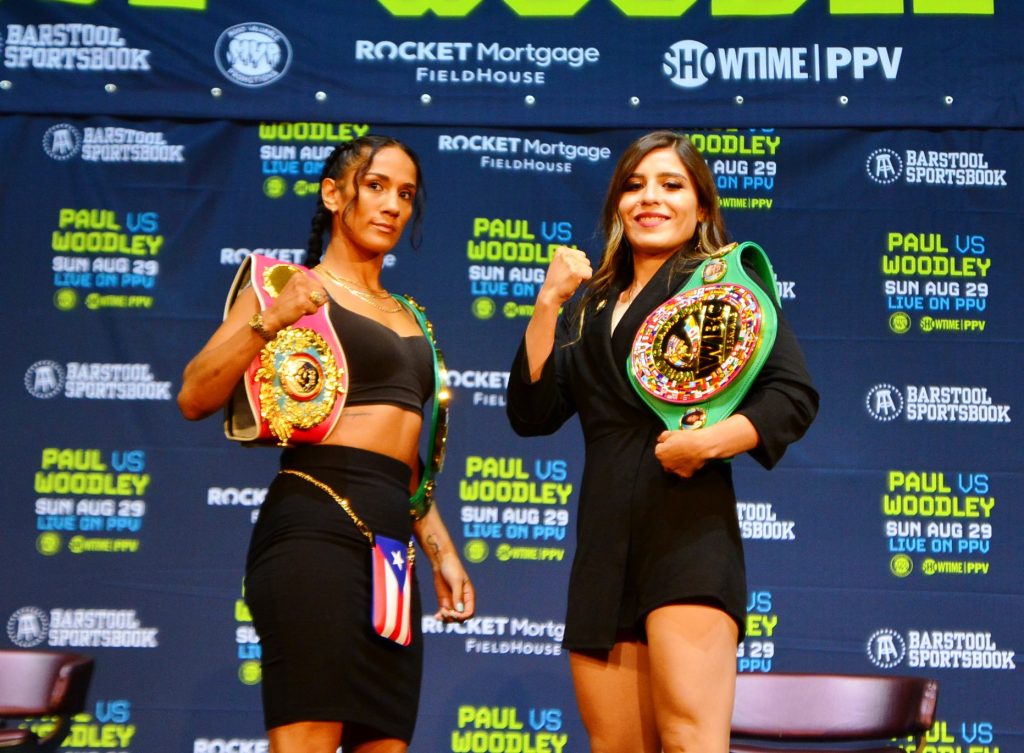 LOS ANGELES-Dressed in a trim black skirt and halter top Amanda Serrano sat poised on the stage of the Novo Theater on Tuesday during introductions of an upcoming fight card.

Politely she listened to other participants like Jake Paul and Tyron Woodley toss verbal grenades at each other.

The southpaw fighter known as “the Real Deal” Serrano recently engaged in a slugfest with Argentina’s Daniela Bermudez. It pit two fighters universally recognized as among the top 10 female fighters pound for pound. After the dust settled it was Serrano who remained standing and victorious.

It was an eye-opening victory.

“Lots of people didn’t know Amanda is a very good boxer,” said Jacob Maldonado who trains and manages her. “Usually, she knocks people out early. But she has tremendous boxing skills.”

Those skills were vibrantly displayed in her knockout victory over Bermudez who had never before been stopped. A body shot in the ninth round ended the battle between world champions that took place last March in Puerto Rico.

“It was a special moment to do it in Puerto Rico,” said Serrano about her significant win that night on March 25.

It was televised worldwide and for those fans doubted her fighting ability Serrano displayed technical superiority in fight angles, piercing Bermudez’s guard and her rib-breaking punching power. It was a revelation.

Many felt that Serrano feared fighting Ireland’s great Katie Taylor after that fight was postponed twice due to the pandemic and other problems. But now, a shift has taken place that have fans convinced that the brunette prizefighter has perhaps the best shot at defeating the undisputed lightweight world champion.

“We’ve had Amanda Serrano on SHOWTIME before and we’re proud to welcome her back to the network. She is without question one of the best pound-for-pound female fighters on the planet and possibly the best,” said Stephen Espinoza, president of event and sports programming for Showtime network. “She has her work cut out for her with Yamileth Mercado, a champion in her own right. She brings her own belt into this, and it’s another installment of the classic Puerto Rico vs. Mexico rivalry.”

The new WBA featherweight titlist Cruz was sought as a perfect opponent. But despite a very good offer, the Mexican fighter declined. Mercado, another Mexican world champion in the super bantamweight division was asked. She immediately accepted to move up four pounds.

“I’m very excited for this fight and thankful for this opportunity. I’m a new generation of fighter and I’m very blessed to be in this fight with Amanda. We’re going to make history,” said Mercado, 23 of Ciudad Cuauhtemoc. “I wanted to compete at featherweight. I feel strong and I’m ready for this.”

“I want to thank Yamileth for taking the fight. She’s a real Mexican champion. Not too many people want to fight me,” said Serrano.

Next month the world gets another opportunity to see one of the best female fighters in the world at any weight in Serrano. Can Mercado match her skills?

“We’re going to leave it all in the ring and the ladies are going to be stealing the show,” Mercado said.

“I think Paul and Woodley are going to have competition for best fight of the night,” said Serrano.