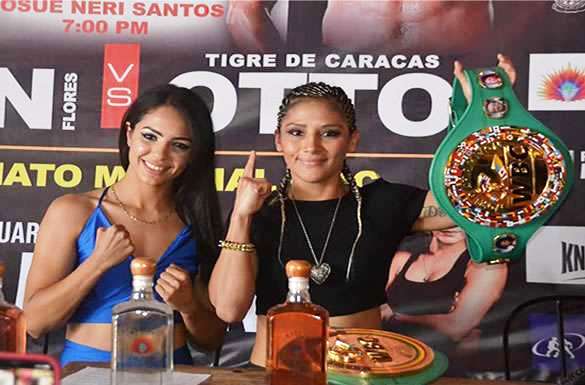 On Friday July 16, they face each other for much higher stakes the WBC super flyweight world title.

Juarez (31-2, 4 KOs) makes her first defense of the WBC world title against Fernandez (23-3, 4 KOs) unlike their first encounter with no world title as a prize. The Mexico City champion shows up again in the border town of Juarez with much more valuable hardware, the green and gold world title, and will look to defend it in a much more convincing fashion than the last time.

The scheduled ten round world championship fight will be the semi-main event of the ESPN Deportes Knockout boxing series televised card throughout Latin America.

“Throughout my career I have fought against the best,” Juarez, 34, said earlier this week at the final press conference before the bout.  “Because of that I did not hesitate to face my #1 challenger.  I am a woman who loves challenges and this win will make my belt mean even more when I bring it back home.”

It was no easy task for Juarez to capture the 115-pound strap.  After defeating Fernandez, Juarez went on a tear taking wins from Kandy Sandoval twice, Jackie Calvo and Leiryn Flores among a few others before facing the then world champion, battle-tested Guadalupe Martinez.

In the fight held in mid-December last year at the Televisa studios in Mexico City, Juarez took the fight to Martinez, boxing at times and in others going toe-to-toe with the much more experienced Martinez.  After the ten war-like rounds, Juarez was awarded a unanimous decision along with the world crown.

As tough as Juarez’s road to Friday night was, Fernandez might have been tougher.

After suffering the loss to Juarez, Fernandez bounced back with a win over journey women Noemi Bosques, Olga Julio and Leticia Uribe.  Two fights later, in the summer of 2019, she moved up to bantamweight to challenge Lourdes’ sister, Mariana “Barbie” Juarez, for her WBC green and gold belt only to be defeated via unanimous decision.

Since then she has strung three consecutive wins, one of them perhaps the most important of her whole career when she beat former multi-time world champion Esmeralda “Joya” Moreno in late 2019 via a unanimous decision.  In her last fight, also last December, Fernandez kept busy against over matched Mariana Mercado.

“I want to give thanks to the champion for this opportunity,” Fernandez, 26, stated during her time at the podium in the final press conference.  “It has been some years I have been going after the belt at super flyweight.   This time the story will be different.  The win and the belt stay in Ciudad Juarez.  I am going to leave everything in the ring so I can get the win against my experienced opponent.”