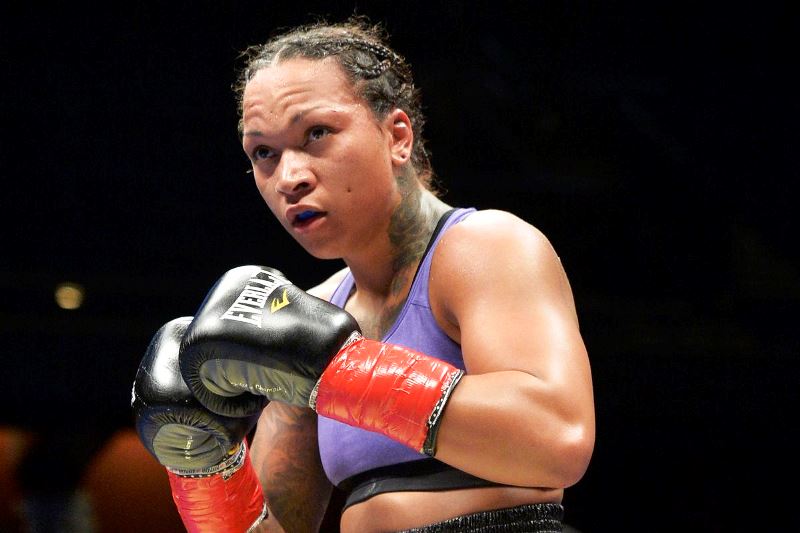 EL CAJON-In the main event from the Sycuan Casino in the outskirts of San Diego, CA, the current WBA light welterweight champion Kali “KO Mequinonoag” Reis retained her title while capturing the vacant IBO strap with a majority decision over the tough Diana Prazak on Friday.

The scheduled 10-round bout was presented by DiBella Entertainment and streamed by the UFC Fight Pass.

The 34-year-old Reis (18-7-1, 5 KOs) of Philadelphia, PA, captured the vacant WBA title with a unanimous decision over Kandi Wyatt last November while Australia’s Prazak (14-4, 9 KOs), 42, inactive since a loss to Delfine Persoon in 2014 for the WBC lightweight title, was coming off a six-round win over Milagros Diaz in Mexico earlier this year.

“If the fans want a rematch, let’s do it, I’m a real fighter,” Reis said seconds after the first defense of her world title.  “Let’s do the rematch.”

Judge Danny Sandoval saw it even with an official scorecard of 95-95 while both Pat Russell and Max DeLuca saw it for Reis with scores of 97-93 and 96-94 respectively.

The opening bell had not finished ringing before Prazak, who lives and trains in Los Angeles, was already on the much taller Reis’ chest landing punches to the body and finishing up to the head.  Reis looked uncomfortable with the early pressure but was the much faster of the two and she proved it scoring with precise two-punch combos.

While Prazak seemed right at home on the inside, Reis never looked comfortable in close quarters complaining of headbutts and forearms from her opponent.

By the third round Reis got into her groove and began to let her hands go a bit more.  The combinations came in sets of two either attacking the body with a right hook and coming up top with an uppercut or going to the head with a hook and finishing up to body.

Prazak seemed undeterred by the harder punches from Reis as she kept going forward looking to land to the body and head with her fists and sometimes with her head.  With boxing from the outside not an option by the fifth, Reis decided to fight Prazak’s fight and began to land hard flush punches on the inside.

The seventh was a convincing round for Reis as she began to physically push back Prazak to produce some breathing room between them and score longer and harder punches.  Reis scored a left hook that stopped the Aussie in her tracks for a split second.  By the end of the round Prazak developed a visible mouse under her left eye.

Prazak’s pressure was impressive undeterred by any punch that the defending champion landed.  Although Reis at times seemed to land at will, Prazak did not know the word stop as she just kept moving forward.  At times she would only land arm punches to the body of Reis but she did not stop attacking all the way to the final bell.

After the full eight rounds, judges at ringside Alejandro Rochin scored it 80-72, Carla Caiz saw it 79-73 while Daniel Sandoval tallied it 78-74.

From the opening bell the strategy of each fighter came to the surface, the taller and longer Ibarra looked to box from the outside while Wyatt hoped for a brawl.  The Canadian enjoyed some success early pushing Ibarra against the ropes scoring with a short-left hook to the chin.

Wyatt continued her attack in the second opening the round with a flush right hand to the chin of the taller Ibarra.  The Mexican began to press the pedal throwing more punches scoring with a counter right hand as Wyatt came in swinging wide.

While Watt looked to make it uncomfortable with clinches when Ibarra came in too close, Ibarra looked to box from the outside scoring with combos including a straight right hand to the body followed with a left hook to the head.

With Ibarra taking control of the action midway through the fight she was willing to take more risks deciding to go toe-to-toe with Wyatt.  They exchanged hard punches with Ibarra scoring the better of them including a flush right uppercut to end the fourth round.

It became evident in the second half of the fight Wyatt had no plan B and slowed down her attack.  Ibarra began to have no trouble catching Wyatt as she came in with wide power punches.  Ibarra had her best round in the seventh scoring early with a straight right.  Seconds later Ibarra scored with a three-punch combo that hurt Wyatt and the Mexican looked for the finish.  Wyatt had no answer but to cover up trying to diminish the damage.

By the eighth and final round, Wyatt had no recourse but to hold while Ibarra kept scoring with her right hand followed with uppercuts to the body and head as Wyatt folded over.

In the post-fight interview Ibarra stated she was more than willing and able to face the current undisputed and unified world champion Jessica “CasKilla” McCaskill when the time came.