Amanda Serrano vs Yamileth Mercado on Sunday PPV
Written by: David A. Avila 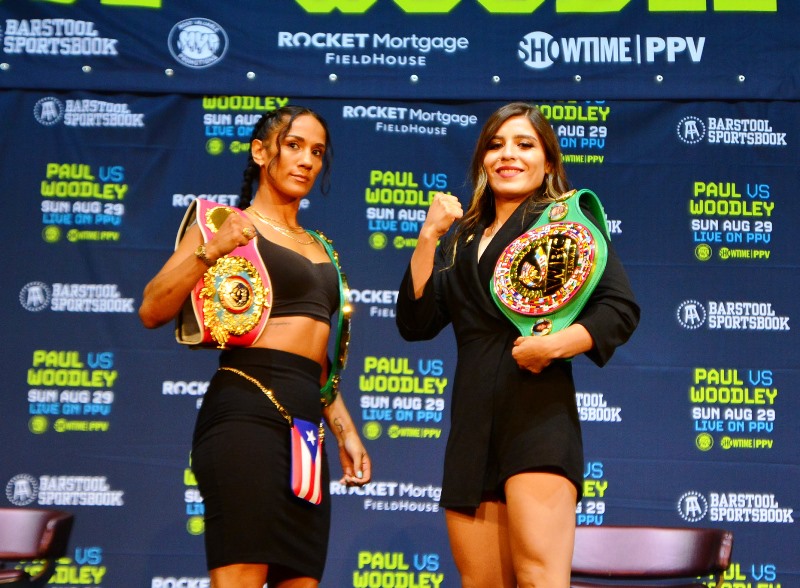 Amanda “the Real Deal” Serrano returns to the boxing ring on Sunday in a battle between division world titlists and another Puerto Rico-Mexico war.

“I’m very excited that they chose me for this event,” said Serrano a seven-division world titlist.

Just how good is Serrano?

This past March, the brunette southpaw met Argentina’s Daniela Bermudez in a clash between legitimate pound for pound fighters. For nine rounds the Brooklyn-based prizefighter demonstrated her superiority before ending the fight with a crushing body shot. Bermudez could not continue.

Most of the boxing world realized Serrano may be even better than first thought. Despite winning world titles in seven weight divisions, many felt she was good, but not great. That way of thinking ceased after the win over Bermudez.

Last year’s failed meeting with Katie Taylor seemed to prompt disappointed fans, especially those from the United Kingdom and Ireland, that the Puerto Rican fighter was afraid. On social media the hordes of ignorance fed by comments from Matchroom Boxing’s Eddie Hearn, felt Serrano was fleeing like a scared rabbit. It was not the case.

“Amanda has no fear,” said Jordan Maldonado, Serrano’s manager, when he visited Los Angeles earlier this summer. “She can fight even better.”

Those are scary words for the rest of the fight world.

Mexico’s Mercado currently holds the WBC super bantamweight world title and did not hesitate to accept the fight when offered.

Mercado’s spokesman said they asked her to take time to consider the fight, but she immediately accepted the challenge.

Mercado moved her training from Chihuahua to Tijuana and now works with Jackie Nava.

“There is no worse loser than the one who gives up before trying,” said Mercado in her social media. “Come on! Let’s go for Mexico, lets go for my people.”

Normally Mercado fights at 122 pounds but is tall for the weight class. Moving up to 126 seems to be a natural progression for the Mexican champion who captured the super bantamweight title by defeating Fatuma Zarika in November 2019. She has fought three times since that win and won all three times.

Both Mercado and Serrano fought Kenya’s Zarika twice. Mercado lost by split decision to Zarika in Kenya but defeated her handily in Mexico. Serrano beat Zarika twice in six-round fights.

On Sunday, the two world champions clash on Sunday at Cleveland as the co-main event with Jake Paul tangling with former MMA champ Tyron Woodley in a boxing match. Several other good boxing matchups are set including one with standout contender Charles Conwell.

Of course, Serrano and Mercado promises to be electric.

Serrano insists her most difficult fight was against another Mexican champion Yazmin Rivas in 2017. She expects the same battle against Mercado.

“Don’t blink during this one, because even though she’s a tough fighter with a lot of heart, this could be a short fight,” Serrano said. “I give her a lot of credit for accepting this fight right away. I know that I’m facing a tough Mexican fighter, but I’ll beat her at her own game.”

Hall of Fame boxer Christy “The Coalminer’s Daughter” Martin appears on a Netflix documentary called “Untold: Deal With the Devil” about her life in and out of boxing.

I recently saw Martin and her partner Lisa Holewyne in Las Vegas for the International Women’s Boxing Hall of Fame. It’s always comforting to see successful retired fighters. Martin, whose promotion company has a fight card this week in South Carolina, led the way to opening up the doors for women to appear on mega fights.

One of the former foes of Martin was inducted into the Hall of Fame at this last ceremony her name is Kathy “Wildcat” Collins. She briefly spoke about having to convince promoters their fight could attract fans. That fight was 20 years ago.

Undefeated light flyweight contender Kim Clavel (13-0) meets Maria Soledad Vargas (15-3-1) in a 10-round fight at Montreal, Canada. The contest will be shown on FITE.tv live on Saturday Aug. 29.

Clavel has performed before on television before when she fought Natalie Gonzalez a year ago in Las Vegas. This time she fights Mexico’s Vargas who fought WBC atomweight titlist Fabiana Bytyqi to a split draw two years ago. It should be fast and furious.

Gabriela Fundora (3-0) knocked out Karol Mazariegos (1-1-1) in the first round on Saturday Aug. 21. The super flyweight fight was held at Tijuana.

Amy Andrews won by unanimous decision after six rounds versus Polina Golubeva (1-2) on Saturday Aug. 21. The super featherweight bout was held in London.