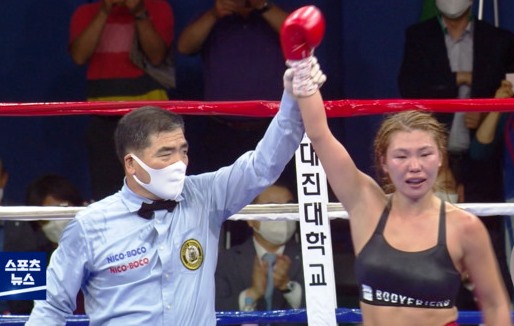 WBA super featherweight titlist Hyun Mi Choi added another notch to her belt with a technical knockout win over challenger Simone Aparecido da Silva over the weekend in South Korea.

Choi, 30, remains in place as one of the challengers for the super featherweight tournament that was stalled due to an injury of Great Britain’s Terri Harper. The other two titlists are scheduled to meet tentatively on Nov.5, in Las Vegas.

Always aggressive Choi (19-0-1, 5 KOs) belted her way to victory over Brazil’s Aparecido (17-17, 6 KOs) until it was stopped at 45 seconds into the ninth round. It should be noted that featherweight champion Amanda Serrano dispensed with Aparecido in three rounds.

All roads are clear for Choi to face Harper who has been inactive since breaking her arm during sparring. No date has been set for the confrontation. The other two champions WBO titlist Mikaela Mayer and IBF titlist Maiva Hamadouche will meet each other possibly on Nov. 5, in Las Vegas.

Not pound for pounders

Argentine icon Yesica Bopp suffered her first loss as a pro in eight years. But most people fail to remember she also lost in the trials last year to make the Olympic team.

Bopp wasn’t the only former top pound for pound fighter who lost during Olympic trials. Others like Delfine Persoon, Maiva Hamadouche, and Christina Hammer also lost to amateur boxers in their attempts to win Olympic glory in Tokyo this past summer.

So why are they rated in several publications as top pound for pound fighters?

It boggles the mind.

Anyone who still ranks these aforementioned fighters in their pound for pound rankings should not be taken seriously any longer.

Lightweight action in So Cal

A couple of undefeated lightweights Chelsey Anderson and Elvina White had no hesitation about facing each other. Refreshing.

Anderson (4-0) of Yorba Linda, Calif. was the lesser-known quantity when she stepped into the boxing ring in Montebello, California last Thursday. She made an impressive showing with two knockdowns of White (5-1), a very strong fighter in the 135-pound division out of Los Angeles.

It looked very bleak for White after getting dropped twice in the first two rounds, but she rallied furiously and made Anderson work hard the last two rounds of the four-round bout. The crowd was ecstatic about the action-packed performance of the two lightweights.

Expect one or both of these lightweights to climb to the top.

Cornejo formerly fought for the middleweight and super middleweight world titles. This is her first fight since March of this year when she lost a decision to Alma Ibarra. Barber fought two weeks ago and won by decision against Ayanna Tramont in New York.

A media event is scheduled on Wednesday Sept. 22, in front of the Doubletree Hotel in Montebello Mall in Montebello, Calif. said a MarvNation Promotions spokesman. All of the participants are expected to attend the event open to the public.

Karen Dominguez (0-0-1) and Claudia Landaida (0-1-1) fought to a split draw after four rounds on Saturday Sept. 18. The minimum weight match was held at Perez.

Elhem Mekhaled (15-0) knocked out Pasa Malagic (15-8) in the first round on Saturday Sept. 18. The EBU super featherweight title fight took place at Feyzin.

Angelica Finch (2-0) knocked out Lara Meyer (0-3) in the first round on Sunday Sept. 19. The featherweight bout was held at Landau.

Simangele Hadebe (10-3-2) won by unanimous decision after 10 rounds versus Thema Zuma (5-6) on Saturday Sept. 18. The flyweight bout was held in Gauteng.

Megan Redstall (1-0) won her pro debut after six rounds versus Ivanka Ivanova (3-16-3) on Saturday Sept. 18. The super bantamweight fight was held at Swindon.

Emma Dolan (1-0) won by technical knockout in the first round over Nicole Goldsmith-Ryan (0-1) on Friday Sept. 17. The bantamweight bout was held at Norwich.