Amanda Serrano: the Hunt for Undisputed Status
Written by: David A. Avila 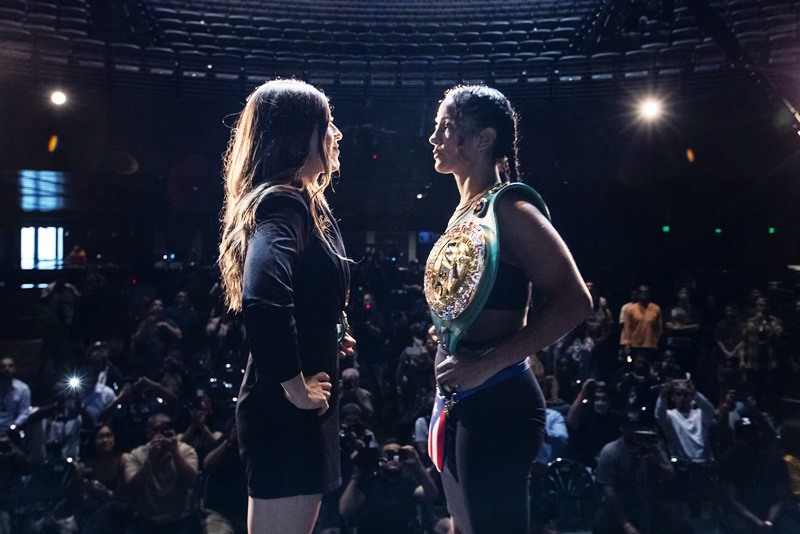 Amanda Serrano In Pursuit of Dominance and More Fight News

Spent several hours last week in Los Angeles with Amanda Serrano and her trainer/manager Jordan Maldonado. For those not familiar with the Brooklyn, New York fighter, she has captured world titles in seven different weight divisions.

Only one other fighter, Mr. Manny Pacquiao, can surpass that and he has eight division world titles.

Serrano, 31, sat with us at a downtown Los Angeles restaurant near LA Live where she participated in a press conference for her upcoming title defense against Mexico’s Yamileth Mercado. The WBC super bantamweight titlist will move up a weight division to compete for the WBC and WBO featherweight titles on August 29 in Cleveland, Ohio.

It was our first actual meeting though we did cross paths years ago at her first MMA fight at the Shrine Auditorium nearby. Over the years we have exchanged messages and notes, but last Tuesday was our first meeting face to face.

As a boxing writer, I’ve met with greats from the 80s like Roberto Duran, Sugar Ray Leonard to champions of the present. When you break bread with someone in a relaxing atmosphere, it opens doors to the real person sitting on the other side of the table.

One thing I can reveal about 99 percent of the prizefighters I’ve met is they are never boring. No other athletes in sports are like prizefighters. They are a different breed.

A casual look at Serrano from a stranger unfamiliar with the Puerto Rican brunette might render a guess that she’s an actress or dancer. Few human beings are as physically fit as Serrano. Even more than a month away from her fight she looks like she could fight tomorrow at 126 pounds.

We sat inside the patio of El Cholo’s Restaurant which serves only Mexican style food. It’s a place we jokingly refer to as “the Office” because we meet there so often. Over the years many of the best fighters in the world have been there including Claressa Shields, James Toney and Oscar De La Hoya.

Maldonado guides Serrano’s career and, aside from serving as her manager and trainer, he also handles her diet. It was his guidance that allowed her to win world titles at 115 to 140 pounds.

“This is her true weight at 126 pounds,” said Maldonado. “She is really a little girl.”

Serrano has a sereneness outside of the gym that disappears when she enters the prize ring. When the bell rings the change occurs and the fighter emerges.

A quick scan of the featherweight division reveals three world titlists overall, but Serrano holds the WBC and WBO versions. The other titlists are Erika Cruz of Mexico with the WBA belt and Sarah Mahfoud of Denmark with the IBF. Both declined to fight Serrano.

During our lunch meeting Serrano said she wishes to unify the featherweight division. She already has world titles in seven weight divisions and realizes unifying her natural weight class could be a boon.

Serrano cuts through excessive verbiage and gets to the point when she talks. In many ways she fights in the same manner. She does not waste punches when she fights. Accuracy is one of her strengths. She has many.

Maldonado says that his charge is the ultimate professional fighter. She excels in every facet of the fight game.

“There are times I have to tell her to take her foot off the pedal because she may scare off the competition,” said Maldonado of Serrano’s abilities.

So far it hasn’t worked.

Serrano’s knockout victory over Argentina’s Daniela Bermudez, a three-division world champion and highly ranked pound for pound fighter, sent shockwaves through the fight universe. No one had ever stopped Bermudez.

“She never had to use those skills before but she has them,” said Maldonado. “Bermudez is a great fighter so Amanda used things she doesn’t need to use with other fighters. Lots of people think Amanda is just a puncher. She is not a one-dimensional fighter.”

During the fight with Bermudez in Puerto Rico fans and others saw Serrano exhibit high-level counters and combinations mixed with perfection. For boxing purists it was beautiful to watch. Though the Argentine fighter tried every maneuver available, Serrano had the antidote and more in winning nearly every round before ending the fight with a left to the body knockout.

DiBella feels Serrano should be recognized as the true featherweight champion since neither other titlist Cruz or Mahfoud are willing to face her in the boxing ring.

“I truly believe Amanda should be recognized as Ring Magazine champion,” DiBella said of an honor given out by our rival publication.

Of course, it would be much clearer to simply have Cruz and Mahfoud agree to fight Serrano. Will they?

Mercado’s manager said that when the offer came, she immediately said “yes.”

“That’s a real Mexican champion,” said Serrano, who previously fought Mexico’s Yazmin Rivas, a former super bantamweight world champion then in 2017. She adds that Rivas was one of her toughest foes.

Serrano further believes that unification bouts are what fans crave.

A year ago, the beginning of the Covid-19 pandemic stopped a match with unified lightweight champion Katie Taylor. After two cancellations, new terms could not be mutually agreed to. Here we are, a year later, arenas are beginning to open up and the time may be right for the two to finally meet in the boxing ring.

It’s a chance to see Serrano, one of the best-skilled fighters on the planet.

Femke Hermans (12-3) defeated Lili Jumali (1-1) by knockout in the third round on Saturday July 17. The super middleweight fight was held at Bruxelles.

Johana Zuniga (16-0) knocked out Everlides Altamar (3-4) in the fifth round on Saturday July 17. The light flyweight match took place in Cartagena.

Daniela Cruces (4-0) won by knockout in the second round versus Elena Campo (0-1) on Saturday July 17. The super bantamweight bout was held at Santiago de Tolu.

Laela El Ksiri (1-0) won by knockout in the third round versus Dragana Golic (0-3) on Saturday July 17. The featherweight contest was held in Paris.

Martina Bernile (2-0-1) knocked out Klea Dumo (0-1) in the second round on Saturday July 17. The flyweight bout took place in Sicily.

Lourdes Juarez (32-2) defeated Diana Fernandez (23-4) by split decision after 10 rounds on Friday July 16. The WBC super flyweight world title fight took place at Ciudad Juarez. It was the first title defense for Juarez and the second time she defeated Fernandez. (Read the whole story by Felipe Leon on this site)

Jennifer Miranda (5-0) knocked out Kalina Nikolova (0-2) in the third round on Sunday July 18. The featherweight fight was held in Madrid.