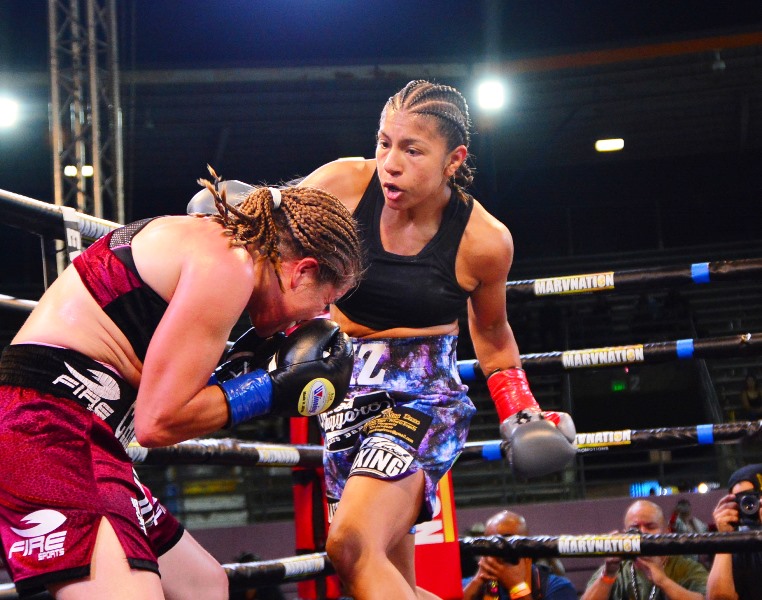 Aggressive from the opening bell, Ruiz of Los Angeles, CA, seemed to be taking out her frustration from her last fight on Franco. Back in March of this year, Ruiz challenged the interim WBC champion Sonia Osorio in Puerto Vallarta, Mexico, but in the 2nd round Osorio suffered a nasty cut over an eye caused by an accidental headbutt and the fight was stopped.

With Franco from Guadalajara, Mexico, the 32-year-old Ruiz found herself against a much more experienced fighter.  The former IBF 105-pound champion has faced a number of big names in female boxing including Ibeth Zamora, Yesica “Tutti” Bopp, Seniesa Estrada, Anabel Ortiz and Ava Knight among others.

It was evident from the opening bell Ruiz would be the taller and stronger than the two.  She proved to be the faster as well as she began pumping a quick jab to the forehead of Franco keeping her opponent at a safe distance.

All night long Franco had trouble closing the distance on the taller Ruiz, she tried brawling but Ruiz would smartly meet her with a straight right hand that would stop the Mexican fighter in her tracks.

By the third round Ruiz found her rhythm and was peppering Franco with hard combinations to the head finishing off to the body of Franco.  Franco grimaced but then unleashed wild looping punches from the outside that would miss their mark more often than finding it.

It was early in the fourth Franco finally found some success and was able to bully Ruiz to the ropes.  There she went to work to the body before “La Cobra” was able to scurry herself to the safety of the center of the ring.

In the second half of the fight Ruiz began to turn up the heat scoring a series of unanswered punches with Franco against the ropes early in the fifth.  Franco seemed undeterred as she came forward despite the number of punches landed by Ruiz.

The pace began to slow down in the sixth but Ruiz was content to pick off the aggressive Franco off with straight rights to the head.  Franco kept looking for the big looping over hand right from the outside but Ruiz was able to see them much better and was able to slip two consecutive ones from the Guadalajara fighter.

Franco at times would see success with hard hooks to the body of Ruiz but they were too few and far in between to make any difference.  In the seventh Ruiz was willing to mix it up with Franco, staying in the pocket and exchanging heavy leather with the Mexican.

Sensing the end was near, Ruiz trapped Franco against the blue corner halfway through the eighth and unleashed a barrage of punches as Franco bent and weaved in hopes of slipping some of the attack. Franco survived the attack but looked worse for wear.

A minute into the ninth Ruiz hurt Franco yet with another straight right hand to the forehead.  Franco reeled back towards to the ropes and Ruiz, smelling blood, went after her with no hesitation.  With Franco’s back to the ropes, Ruiz attacked going to the head and body with hard hooks and straight rights.  With Franco not able to defend against the onslaught, referee Raul Caiz Jr had no choice but to stop the action.

Official time was 1:20 of the ninth round.

“Diva” Cornejo Gets Back to Winning Ways

Los Angeles, CA, middleweight Maricela “La Diva” Cornejo (14-5, 5KO) gets back to the win column with a workwoman-like unanimous decision over the game Miranda Barber (2-3, 1KO) over six rounds.

All three judges scored it for Cornejo, actual scores were not announced.

The 34-year-old Cornejo was coming off two straight losses, a first in her career.  The first came in September of 2019 when she challenged the WBC super-middleweight champion Franchon Crews-Dezurn on short notice.  Two years later Cornejo traveled to Puerto Rico and lost a unanimous decision to Mexican amateur stand out Alma Ibarra in March of this year.

Barber, a pro since late 2020, won her last fight by TKO over the previously undefeated Ayanna Tramont earlier this month.

From the opening bell Cornejo at the urging of her corner established the double jab on her shorter opponent.  Barber, the less skilled of the two, was undeterred as she looked for every which way to make her way to the inside of the local favorite.  Soon Cornejo married her jab with a straight right hand that found its home on Barber’s chin but didn’t bother the fighter from Boca Raton, Florida.

Cornejo began to apply the pressure in the third landing a hard right hand to the face of a crouching Barber.  Midway through the round Cornejo finally found her groove as she heated up the action by throwing more punches.

Despite the rounds not going her way, Barber looked to be having fun inside the ring flashing a smile at Cornejo as she tried to make it a brawl in the second half of the fight.

With any hope of finishing the fight in her favor slipping through her gloves, Barber lunged at Cornejo to start the fifth round, looking to land anything.  Cornejo was able to survive the short storm only to see Barber switch to southpaw in one last ditch effort to make something happen.

It wasn’t enough as Cornejo continued to control the action from a distance with controlled action to the final bell.