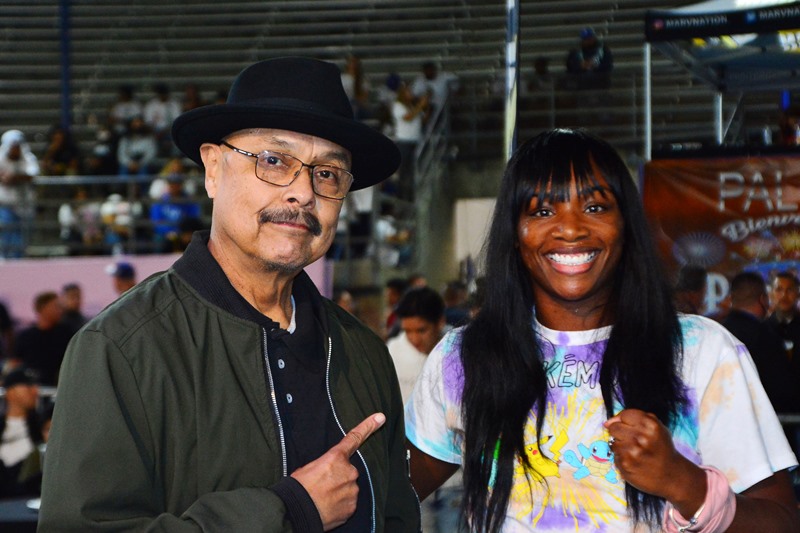 Adelaida “La Cobra” Ruiz led the return of the smaller fight shows in Southern California last weekend and was rewarded with a super flyweight title.

After 18 months of waiting to re-enter the prize ring due to the pandemic that paralyzed live boxing shows in California, Ruiz finally was given an opportunity to compete for the vacant WBC Silver title and emerged victorious by knockout over Mexico’s Nancy Franco.

Ruiz was not alone on the card. She was supported on the boxing card by middleweight contender Maricela Cornejo who handily defeated Miranda Barber by points after six competitive rounds.

Live boxing for smaller shows has finally returned and more than 1,400 fans filled the outdoor Pico Rivera Sports Arena a venue that usually hosts Mexican rodeos. The big promoters with television money were always active, but smaller shows were unable to stage fight cards. Ruiz was the main event.

Fans eagerly approached the pound for pound best for photographs and she obliged each one.

Watching Shields graciously accept her role as the ambassador of women’s boxing made me think back to 2014 when I argued with a slew of anti-women boxing experts over women headlining boxing cards. They had insisted that women’s boxing would never be worthy of main event status.

I had cited UFC star Ronda Rousey as a perfect example of a female fighting star attaining star status. The quartet of experts arguing with me insisted that Rousey was different because it was MMA. My counter was fighting is fighting. I knew it was simply a matter of time that a female star would emerge. Exposure was the only ingredient missing.

One of those same anti-women boxing experts attended that fight card in Pico Rivera. I smile to myself every time I see one of them at a boxing show involving female fighters.

Claressa Shields, Katy Taylor, Amanda Serrano, Seniesa Estrada and Mariana “Barbie” Juarez are all capable of filling American arenas with fans when they fight. It was Juarez who set the all-time record of 400,000 fans at her 2017 fight in Mexico City. No male fighter can make that claim.

Shields recently signed an agreement with Sky Sports and Boxxing a British group that also works with WBO middleweight titlist Savannah Marshall. Both Shields and Marshall are poised to meet each other next year. It’s a blockbuster fight in Europe, but not as big a fight in the Americas so it makes sense to hold the fight in Europe.

Marshall is the only boxer that can claim a win over Shields in the amateurs. It was a win by points.

Shields will be fighting next on an MMA card on Oct. 27, in the USA. Marshall is scheduled to defend her middleweight title against Lolita Muzeya on Oct. 16. Then comes the showdown probably in England.

Mariana “Barby” Juarez and Jackie “Aztec Queen” Nava will finally be facing off against each other probably in November or December. One rumor spreading is they will be on the under card of Saul “Canelo” Alvarez versus Caleb Plant on Nov. 6, in Las Vegas. But it’s just a rumor.

Although neither fighter holds a world title any longer, my question is if the two Mexican fighters will be tested by VADA? It’s a legitimate question especially after the death of Jeanette Zacarias Zapata last month. Juiced athletes have no place in combat sports. It’s too dangerous.

Marcela Acuna (50-7-2) won by unanimous decision after six rounds versus Natalia Alderete (3-4) on Saturday Sept. 25. The featherweight fight was held in Concordia.

Camila Mistrovich (1-0) won her debut by disqualification after three rounds versus Gisela Quintanilla (0-1-1) on Friday Sept. 24. The flyweight bout was stopped due to a bad cut on Mistrovich due to a clash of heads. It took place at Buenos Aires.

Martine Vallieres (4-0) was the victor by unanimous decision after six rounds versus Lindsay Garbatt (9-8-2) on Thursday Sept. 23. The featherweight fight was held in Quebec.

Daniela Cruces (6-0) knocked out Luisa Meza (0-4) in the third round on Friday Sept. 24. The super featherweight bout was held at Tolu.

Elsa Hemat (2-4-2) and Diana Starkova (1-0-1) fought to a split draw after six rounds on Saturday Sept. 25. The super lightweight match was held at Cergy-Pontoise.

Beke Bas (15-0) was the victor by unanimous decision after six rounds against Marina Sakharov (5-13-2) on Friday Sept. 24. The super featherweight fight took place in Berlin. Also, Michelle Klich (3-0) knocked out Sonja Pilipovic (0-11) in the second round of a bantamweight match.

Oleksandra Sidorenko (9-0-1) and Jelena Janicijevic (3-1-1) fought to a split draw after 10 rounds on Friday Sept. 24. The EBU lightweight title fight was held at Oborniki Wielkopolskie.

Tijana Draskovic (1-0) won by decision after four rounds versus Marina Damjanovic (0-1) on Friday Sept. 24. The super featherweight bout was held at Obrenovac.

Melanie Sorroche (18-2-2) won by third round knockout of Angela Cannizzaro (6-11-1) on Thursday Sept. 23. The bantamweight fight was held at Madrid.

Raven Chapman (1-0) knocked out Polina Golubeva (1-3) in the fifth round on Saturday Sept. 25. The super featherweight fight took place at Sheffield.

Beth Arthur (1-0) won by knockout in the third round versus Klaudia Vigh (3-32-1) on Friday Sept. 24. The welterweight fight took place at Glasgow, Scotland. Also, Kate Radomska (1-0) won by decision after six rounds against Judit Hachbold (5-12) in a light flyweight bout.

Karen Dulin (5-22-1) won by technical knockout in the second round over Littikie Langston (0-1) on Saturday Sept. 25. The featherweight fight took place at Greenville, South Carolina.

Maryguenn Vellinga-Heinz (2-1-2) and Indeya Smith (1-3-2) fought to a draw after four rounds on Saturday Sept. 25. The flyweight bout was held at Wendover, Utah. This was their second draw.