Shannon Courtenay vs Jamie Mitchell and More News
Written by: David A. Avila 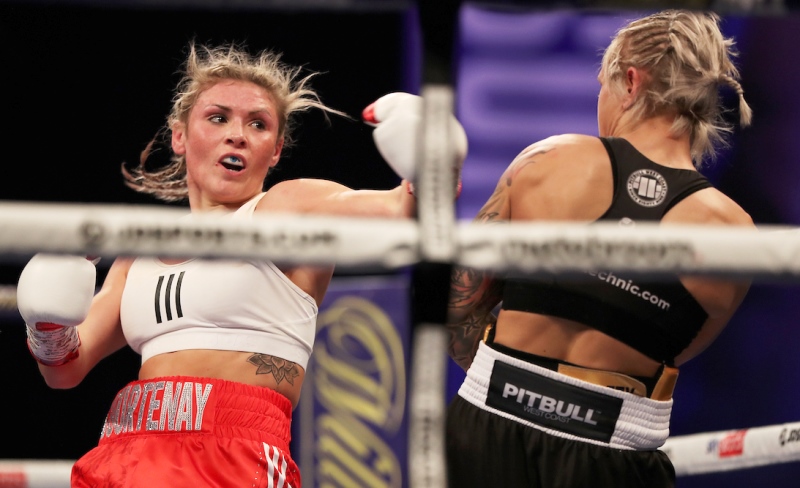 Ever since Shannon Courtenay cracked into the land of the world champions with a lethal right cross a year ago, the bantamweight from England has opened eyes with a swagger and a curtsey.

No backward steps for this fighter.

After winning the title against Dorota Norek by knockout last December, Courtenay followed that victory with a tornado-like battle against Australia’s Ebanie Bridges this past April in London. It was one of the best fights of the year.

Now Courtenay engages with yet another relatively unknown bantamweight with modest credentials, but still undefeated.

Mitchell at 36, has a few years in age but has faced some competition in a professional career that began only four years ago. She also has seven years as an amateur that included contests against Marlen Esparza, Melissa Odessa Parker and Christina Cruz.

You never know how an amateur boxer makes the transition into the professional side of boxing, especially in a 10-round fight. It’s longer and the punches are much harder.

Courtenay, 28, has shown an ability to dig down deep and find that extra reservoir of energy needed in a championship fight. She did it against Rachell Ball in her only loss and also showed the same gumption against Norek and Bridges in her wins.

It’s a good step if Courtenay plans to unify against the other bantamweight champions such as Mexico’s Yulihan Luna, Denmark’s Dina Thorslund, America’s Melissa Odessa Parker and Argentina’s Maria Cecilia Roman. Any one of these champions would be worth watching on the world stage.

A unification clash between super lightweights Kali Reis (18-7-1, 5 KOs) and Jessica Camara (8-2) will take place on Nov. 19, at the SNHU Arena in Manchester, New Hampshire USA. DAZN will stream the Matchroom Boxing and Golden Boy Promotions fight card it was announced today.

“This is a fantastic quadruple header of world title action,” said promoter Eddie Hearn about the fight card that features three other world title fights with WBO middleweight titlist Demetrius Andrade defending against Ireland’s Jason Quigley in the main event.

The female world title fight between Reis and Camara is all part of a women’s super lightweight tournament that begins on October 30 in London, England as IBF titlist Mary McGee fights WBC titlist Chantelle Cameron in the first stage.

For those unaware, WBO super featherweight titlist Mikaela Mayer will battle IBF titlist Maiva Hamadouche of France on Friday Nov. 5, at the Virgin Hotels in Las Vegas. Tickets are already on sale for the clash between 130-pound champions.

Mayer (15-0, 5 KOs), a 2016 Olympian, grabbed the WBO title from Ewa Brodnicka by decision a year ago and defended it this past June against former world champion Erica Farias of Argentina.

Hamadouche (22-1), attempted to compete in this year’s Tokyo Olympics but was beaten during qualifications. She still holds the IBF title and it will be at stake when she meets Mayer.

Mayer and Hamadouche have an ongoing grudge match via social media. The winner will proceed to fight the winner between England’s Terri Harper and South Korea’s Hyun Mi Choi. No date has been determined for those two due to a persistent injury suffered by Harper.

Clara Lescurat (3-0) won by decision after six rounds versus Roxana Bermudez (3-4-2) on Saturday Oct. 2. The flyweight bout was held in Buenos Aires. Also, Lucia Perez (1-0) knocked out Gisela Luna (0-5) in a welterweight match; and Camila Avaca (1-0-1) and Micaela Castro (0-0-1) fought to a majority draw after four flyweight rounds.

Sarah Higginson (3-0-1) beat Danni Mace (0-1) by knockout in the fourth round on Friday Oct. 1. The Australian bantamweight title fight took place at Northbridge.

Sandy Meunier (1-0) won by technical knockout in the third round over Kateryna Drozd (0-2) on Saturday Oct. 2. The super welterweight match was held at Loire-Atlantique.

Stephanie Silva (4-0) defeated Olena Gurieva (1-1) by decision after eight rounds on Saturday Oct. 2. The flyweight bout took place in Roma. Also, Mahjouba Oubtil (1-0) knocked out Alina Samsonova (0-4) in the first round of their super lightweight fight.

Sandy Ryan (2-0) knocked out Aleksandra Vujovic (4-15-2) in the fourth round on Friday Oct. 1. The welterweight fight took place at Milan.

Cristina Garrobo (5-1-1) knocked out Dariel Simova (0-3) in the second round on Saturday Oct. 2. The bantamweight match was held in Madrid.

Tereza Dvorakova (4-5) won by decision after four rounds against Hannah Jones (0-1) on Saturday Oct. 2. The lightweight fight was held at Derbyshire.

Kirstie Bavington (4-2-2) was the winner by decision after six rounds against Beccy Ferguson (0-1) on Friday Oct. 1. The super lightweight bout took place at Wolverhampton.