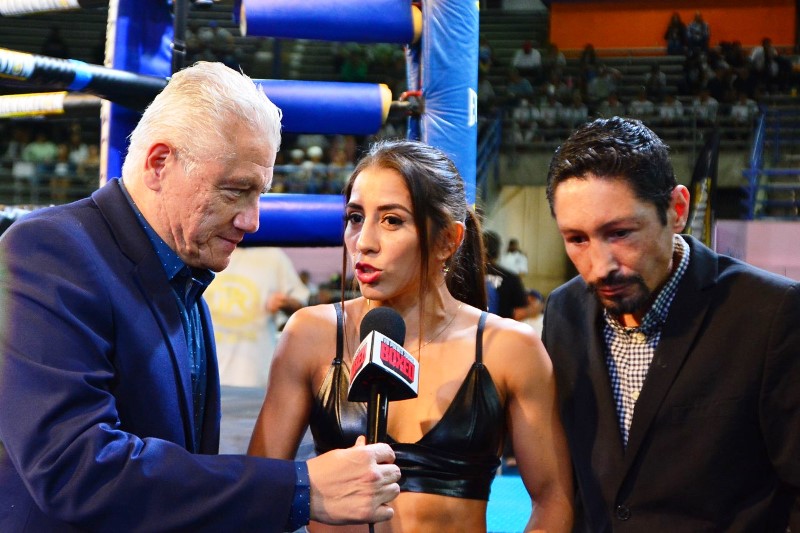 Female fighters like Yokasta Valle and others don’t make as much money as their male counterparts so they improvise:

Jackie Nava is an architect and former Mexican senator.

Tiara Brown is a former police officer in Washington DC.

Yesica Bopp is a psychologist and Argentina business owner.

So, when Costa Rica’s Valle, an IBF 105- champion, decided to take a vacation in Southern California a few weeks ago, she mixed business with pleasure.

“I was invited by MarvNation,” she stated in an exclusive interview when asked how she found her way to the Pico Rivera Arena late last month to enjoy ringside for Adelaida Ruiz’s win over Nancy Franco for the vacant WBC Silver super flyweight title.  “I saw a post by Seniesa Estrada stating that nobody wanted to fight against her.  She said they should take the world title to the other champions.  I posted a reply that here I am.  I came to her hometown of Los Angeles to tell her I am more than willing to face her,” she continued.

The undefeated Estrada (21-0, 8KO), the current WBA 105-pound and WBO 108-pound world champion, did not hesitate to snap back asking why Valle did not go to a Golden Boy Promotions, Estrada’s promoter, press conference and not some random press gathering.

“I am here, she is the one that made the challenge,” Valle explained.  “What’s more than to come all the way from Costa Rica to Los Angeles, she could have come here, to the MarvNation fight card.  Now the only thing left is to negotiate.  I want to unify the titles.  I want her title.  If she doesn’t want to fight, I will look for the other champions. She says I only care about the money, but she is wrong, what I care about is the world title.”

Despite Valle, 29, being one of the most popular figures in her home country of Costa Rica, a mega star who has participated in her country’s version of “Dancing with the Stars”, she assures she is more than willing to put it all on the line and face Estrada in the United States.

Valle stresses despite Estrada being a champion at two weight classes, the world title she is interested in is the one at 105 pounds.  “We wanted Anabel Ortiz but she (Estrada) beat her so the WBA title is the one I want.”

Recently the bigger names in female boxing have suffered losses.  From Mariana “Barbie” Juarez to Yesica “Tutti” Bopp both have lost their most recent fights. Valle agrees there is a change brewing in the sport and she considers herself one of the new wave of fighters ready to make waves.

“I feel that that me, as well as Seniesa, and other fighters, have been growing their name in the sport,” she said.  “Amanda Serrano is another one, it is very motivating, the way female boxing has been growing.  ‘Tutti’ Bopp, a fighter I admire immensely, she was one of my biggest motivators to go pro, I feel that it is time for her to retire.”

Earlier last month Valle made her debut in Costa Rica as a promoter. She shares she has big ideas on how to promote female boxing not only in her home country but elsewhere.

Valle explained she teamed up with her current promoter to start her promotional company where she looks to feature up and coming talent.

“I feel with my profile in Costa Rica, being a world champion, I can bring some attention to female boxing in my country,” she said.  “I think that would be a bit easier. We have to compete with the most popular sport in Costa Rica which is soccer.  Female boxing is widely seen in my country and I have a lot of support.  We must keep that fire going.  I want to make it easier for the up-and-coming fighters.  I don’t want that when I retire that support ends.  I want to help the new generations.?”