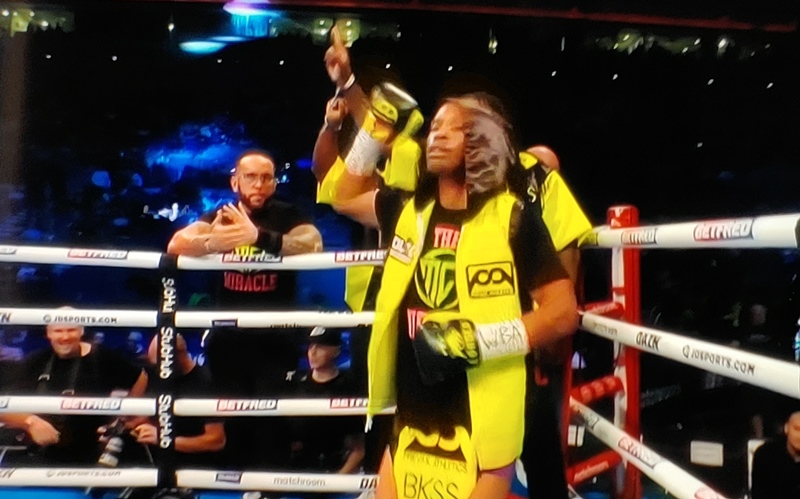 America’s Jamie Mitchell wasted no time in setting a fast pace and outworking Shannon Courtenay to take the WBA bantamweight world title by majority decision in Liverpool, England on Saturday.

Mitchell opened up the fight on full-on attack mode and charged forward behind a steady barrage of blows. Courtenay had her back on the ropes and countered with power shots. Some landed, but nothing slowed Mitchell’s flurries in the first round.

It was four Mitchell blows for every Courtenay blow.

In the second frame Mitchell decided to box and move. That seemed to allow Courtenay momentum and when Mitchell fired combinations, she was met by the former champions counters. Though the American fighter out-landed Courtenay, this time it was not enough to offset the power shots that connected.

Back on attack went Mitchell.

Once again Mitchell dived in with both fists firing. This time after a few connected she moved out of range for Courtenay’s counters. Fewer punches were exchanged in the third round.

Using the knowledge of what worked and what didn’t work, Mitchell and her team were able to devise a working attack. Back inside Mitchell went to work and Courtenay looked to counter but was unable to find contact to win the fourth round. Every time Mitchell unloaded an exchange Courtenay would attempt a counter and the American would slip underneath the punches.

Courtenay was unable to find success until her corner advised her to step up the pace. She also had a large welt alongside her left eye.

In the eighth round the former champion who missed weight by two and a half pounds finally connected with a right and left that seemed to stun Mitchell. Courtenay charged forward as Mitchell tried to hold and landed another two big right hands. It was her best round since the second.

A degree of confidence seemed to add more energy to Courtenay who seemed eager to close the show. Mitchell burst into the ninth round with an eight-punch barrage but Courtenay landed her own combination that backed up Mitchell for a moment. Back and forth they exchanged but it seemed Courtenay had regained some momentum.

In the 10th and final round, Courtenay landed a right cross but allowed Mitchell to outwork her for most of the round. It seemed the British fighter was looking for that knockout blow and Mitchell took advantage.

“I feel awesome,” said Mitchell. “I did what I said I would do.”

“I felt I won the fight,” she said. “I landed heavier shots.”

Mitchell was sitting alongside when Courtenay made her comments.

“She said I didn’t land any shots but look at her face,” Mitchell said.

Mitchell now holds the WBA bantamweight title and seems willing and eager for a rematch.