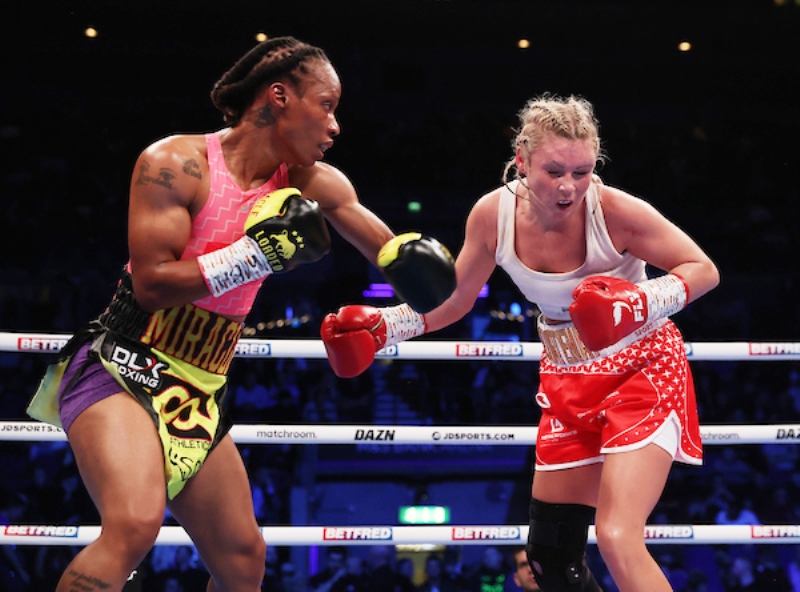 Courtenay, though overweight, was never out of the fight and though she entered the fight ineligible to retain the WBA bantamweight title, the feisty pugilist was always looking for the knockout blow. She connected and received many blows in return, but was unable to deter Mitchell.

Mitchell outworked Courtenay from beginning to the end before more than 11,000 fans at the Liverpool, England arena. It’s good to see fans again.

With Mitchell now adding her name to the list of world titlists, this is how the bantamweight class now looks:

WBC Yulihan Luna (22-3-1, 4 KOs) Mexico. The 27-year-old from Durango was able to wrest the throne from Mexican great Mariana Juarez. It was one of the greatest upsets of the last 10 years. Luna is a former super bantamweight world titlist who dropped down a weight division several years ago. She is 5’5” in height and knows how to use her reach. Almost all of her fights have been in Mexico.

WBO Dina Thorslund (16-0, 6 KOs) Denmark. The 27-year-old from Struer has a date next month against former super flyweight world titlist Zulina Munoz of Mexico. The title clash takes place on Nov. 13, in Kolding, Denmark. Thorslund formerly held the super bantamweight world title but dropped down in weight to compete in the more talented weight division. She is very strong and relentless but never fought outside of Denmark or Germany.

IBF Maria Cecilia Roman (15-5-1) Argentina, 38, despite losing to Melissa Odessa Parker by majority decision in an eight round fight this past February in Florida, she retained the IBF version. Strange circumstances.

IBO Melissa Odessa Parker (5-0), 2 KOs) USA, 34, won the IBO version by majority decision in an eight-round fight. Most world title fights are 10 or on rare occasions 12 round affairs. Still, Parker, a southpaw, holds a version of a bantamweight title and seeks another opportunity.

WBA Jamie Mitchell (7-0-2, 4 KOs) USA, 36, her win places in smack in the middle of a weight division that has been slowly heating up the past two years. Now the bantamweights are beginning to sizzle especially with the assistance several top-notch fighters in the United Kingdom.

Other elite bantams from the UK are Shannon Courtenay who is purported to have a rematch clause with Mitchell. And there is Elie Scotney who campaigns at super bantamweight but could probably drop down to 118.

Australia recently provided the world a glimpse of Ebanie Bridges and her talent, but there are others like Avril Mathie who trains in Florida, Shannon O’Connell a former champion and Susie Ramadan another former champion.

Mexico has always been loaded with bantamweights and though many of their records are not spotless, they are battle-ready and often better than expected such as Jessica Gonzalez, Paulette Valenzuela and Jasseth Noriega.

America also has been a bastion for bantamweights and among those ready to contend are Rosalinda Rodriguez, Merari Vivar and a slew of amateurs that just turned professional these past few months.

Little is known about Muzeya who has only fought on the African continent. This will be her first prize fight in Europe. She does have eight knockout wins but has not faced elite competition in the middleweights. Muzeya remains a big question mark but you never can tell with African fighters. They have a tendency to surprise.

Marshall is quite the opposite of Muzeya. The tall middleweight has an extensive amateur background and packs a lot of power in those fists. Her best wins have been against former champions Hannah Rankin and Maria Lindberg who she stopped by technical knockout in the past 12 months. She’s headed for a showdown with Claressa Shields after this fight probably early next year.

Oriana Sanchez (2-1) won by decision after four rounds against Maira Loyola (0-1-1) on Friday Oct. 8. The light flyweight match was held in Buenos Aires.

Amy Naert (4-0) was the winner by unanimous decision after four rounds versus Claudia Ferenczi (20-83-8) on Saturday Oct. 9. The super flyweight bout took place at West Vlaanderen.

Claribel Mena (6-1) won by knockout in the second round against Rocio De Leon (1-26-2) on Friday Oct. 8. The super welterweight bout took place at Santo Domingo.

On Sunday Oct. 17, featherweights Priyanka Priyanka (0-0) and Rajwant Kaur (0-0) debut against each other four rounds at Patiala.

Lianne Bush (1-0) won her pro debut by decision after four rounds against Eftychia Kathopouli (4-2) on Saturday Oct. 9. The featherweight fight was held at Nottingham.