Chantelle Cameron vs Mary McGee in London and More
Written by: David A. Avila 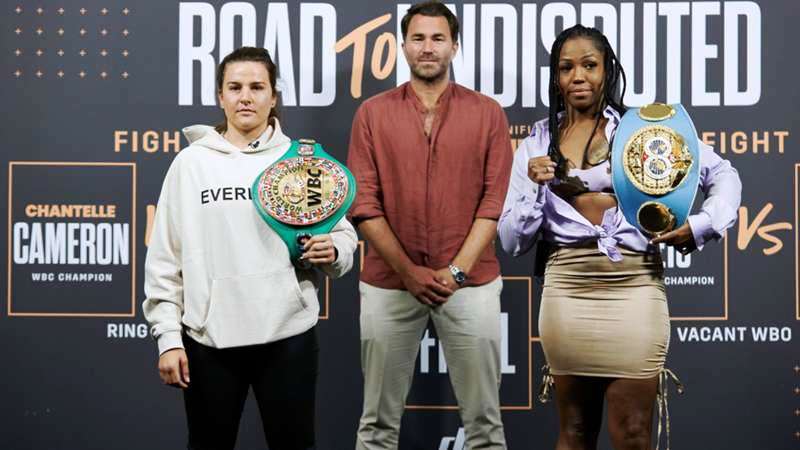 Can she do it?

WBC titlist Cameron (14-0, 8 KOs) has homefield advantage on Saturday when she meets IBF titlist Mary McGee (27-3, 15 KOs) a veteran with loads of pedigree at O2 Arena in London, England. DAZN will stream the Matchroom Boxing card.

Cameron, 30, had never fought outside of the United Kingdom until meeting American veteran Melissa Hernandez last May in Las Vegas, Nevada. It was a one-sided affair with Cameron overwhelming Hernandez for a stoppage win.

McGee, 35, has extensive pro experience somewhat like Hernandez. The native of Indiana has been lacing up professionally for 16 years and has faced champions like Holly Holm and Erica Farias. About two years ago she met Argentina’s Ana Esteche and stopped her in the last round to win the IBF title in New York City. Three months later she stopped Deanha Hobbs in the ninth round in her first title defense.

Inactivity could be the weak link for McGee. It will be 20 months since her last fight. Cameron fought a mere five months ago.

It’s the first salvo of the super lightweight tournament to decide who will be undisputed champion at the 140-pound division.

Later, on November 19, WBA and IBO titlist Kali Reis will clash with Jessica Camara for the vacant WBO version at Manchester, England. The winner will face the winner of Cameron versus McGee.

Three of the four participants are managed by Brian Cohen of Philadelphia. He’s one of the top managers in the USA and has invested heavily in female prizefighting. Reis, McGee and Camara are all under his wing. Also, new WBC bantamweight titlist Jamie Mitchell and contender Ebanie Bridges are aligned with Cohen.

Its ready, set, go for the super lightweights beginning this Saturday.

Two of Mexico’s most legendary fighters Mariana “Barbie” Juarez and Jackie Nava finally meet in the boxing ring on Saturday October 30, in Tijuana. Azteca in Mexico will televise it.

This fight has been scheduled numerous times in the past including August 2017 when it was set to take place on the exact same day as Floyd Mayweather versus Conor McGregor in Las Vegas. There have been other times as well.

Juarez, 41, began her pro career in 1998. But there were underground fights she had partook even before that. She rose from a girl who spurned a career as a fashion model to become perhaps the most famous fighter in Mexican history. She also won world titles in the flyweight, super flyweight, and bantamweight divisions.

Perhaps her greatest accomplishment was attracting an estimated 400,000 fans to her world title fight against Catherine Phiri in Mexico City in April 2017. It remains a record attendance for any prize fight male or female.

Nava, 41, began her fighting career in 2001 in the border city of Tijuana. Known as the Aztec Princess she was more warrior than princess and engaged in two of the most violent and riveting battles ever seen with Ana Maria Torres in 2011. Along with being a longtime super bantamweight world titlist she became a Mexican senator representing her area.

Will they finally meet in the boxing ring on Saturday? And who will emerge victorious?

All three judges scored it 96-94 for Nguyen. They seem to be wrong.

The fight is available on Youtube.com and it appeared Tada was the clear-cut winner. The taller Tada used her southpaw jab and experience to win at least eight rounds. Maybe more.

Nguyen was very inaccurate though busy with her punches. Perhaps her best attribute was her ability to take a good punch. She absorbed many straight lefts from Tada who was scored last years Knockout of the Year.

Tada deserves better than to be stripped of her title by politics. For more on this story read Yuriko Miyata’s piece on thePrizefighters.com.

It’s the 10th year that the Beautiful Brawlers stage their tournament that includes female boxers from all over the USA and a team from Mexico. Many of today’s top fighters participated in previous tournaments including Czarina McCoy, Jamie Mitchell and Roxanne Verduzco. Expect many future champions to emerge from his tournament held in the San Francisco Bay area.

Every year Beautiful Brawlers headed by Blanca Gutierrez, Martha Salazar, Lupi Gutierrez, Coco Militar and Sonya Hernaes showcases new talent in this annual tournament. Last year the pandemic forced a postponement, but this year a huge response by boxers across the country and beyond make this a tournament to watch.

Aldana Ponds (0-0-1) and Lourdes Grand (0-0-1) battled to a draw after four rounds on Saturday Oct. 23. The super lightweight match was held in Buenos Aires.

Yesica Bopp (37-2) won by technical knockout over Johana Zuniga (16-1) in the fourth round on Saturday Oct. 23. The WBA light flyweight title fight took place at Barranquilla. Also, Clara Lescurat (4-0) knocked out Kairuan Montenegro (3-9) in the second round of a super flyweight fight.

Lucie Sedlackova (13-1-1) knocked out Sonja Pilipovic (0-12) in the first round on Saturday Oct. 23. The featherweight fight was held at Northeim.

Thi Thu Nguyen (5-0) won by unanimous decision after 10 rounds versus Etsuko Tada (20-4-3) on Saturday October 23. The WBO minimumweight title fight was held at Ansan. Nguyen fights out of Vietnam and becomes her country’s first champion.

Rosalinda Rodriguez (13-0) moved up in weight to fight Elizabeth Tuani (1-4) and won by technical knockout in the second round on Saturday Oct. 23. The super featherweight fight was held in Tampa. Usually, Rodriguez fights at bantamweight.