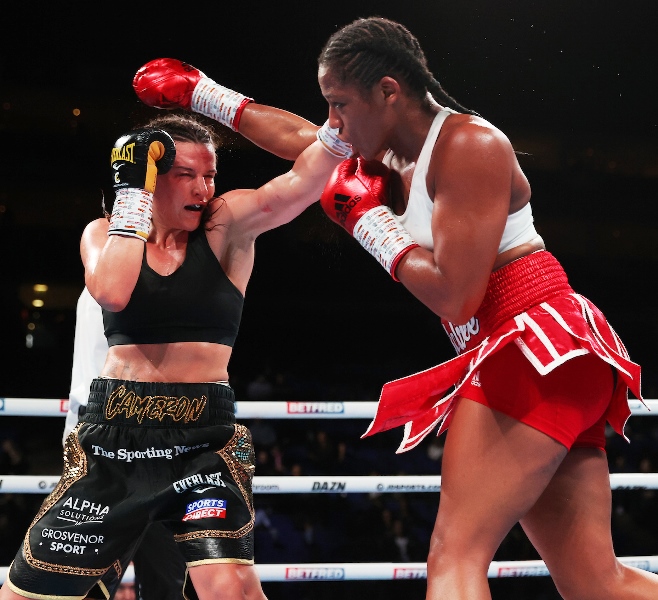 Amid pomp, fanfare and a crowded British arena Chantelle Cameron captured a unanimous decision victory against America’s Mary McGee to add the IBF super lightweight title with the WBC crown on Saturday.

It was not easy as her bruised face showed.

WBC titlist Cameron (15-0) used a persistent fluid attack to out-hustle IBF titlist McGee (27-4) in a 10-round battle and first step in unifying the super lightweight division at O2 Arena in London, England. Now she has both the WBC and IBF titles.

“She was tough,” Cameron said. “We expected her to be tough.”

In the opening round both champions exchanged almost immediately with McGee seeming to win by just the slightest edge. After that, Cameron used her agility to quicker hands to outscore the American champ.

Cameron seemed more fluid with her movement while McGee seemed planted on unsteady legs. But whenever the British fighter attempted to overwhelm McGee she quickly discovered the American had the skills to slip and counter in close.

For three rounds Cameron found success by changing direction and moving in with combinations whenever McGee moved near the ropes. Each connected with solid shots but though McGee fought well with her back on the ropes, it was not a good look.

McGee started strong in the fifth round by focusing on the body attack. She pounded Cameron’s torso with solid and thudding shots. Though Cameron countered, McGee regained the momentum. Throughout the fifth round she was moving forward on attack.

Cameron began to circle and move and slowed the action. Maybe she was tired or perhaps seeking to lure McGee into a misstep, but the action slowed.

With only four rounds remaining Cameron returned to her former attack mode and began peppering McGee with quick three-punch combinations. McGee was able to slip and block most, but unable to mount a consistent attack and her legs always looked unsteady.

McGee finally found success by pursuing Cameron especially when she attacked from a southpaw stance. It seemed to stall Cameron until she countered with a strong right cross and then another three-punch combination. McGee countered with another left to end the round.

The final round saw both champions exchange in furious fashion. Though neither seemed to score cleanly they both seemed to have excess energy at the final bell. The judges scored it 100-90, 99-91, and 99-92 for Cameron. Which seemed to ignore a few really good rounds for McGee, but the end result was fair.

Cameron will now face the winner between WBA and WBO titlist American Kali Reis (18-7-1) and Canada’s Jessica Camara (8-2) who fight for all those titles and the IBO vacant title on Nov. 19, in Manchester, England.

Super bantamweight prospect Ellie Scotney (3-0) remained undefeated by decision after eight rounds versus Spain’s Eva Cantos (2-2). It was a fight that saw each fighter change strategies and adapt.

England’s Scotney also changed trainers before this fight and though she won by decision according to the referee – who serves as the only judge – there were moments that Cantos found success too.

Scotney was able to adapt and change too in the last two rounds and was especially adapt at using her quick and accurate counters in the first three rounds. Cantos found success in the fifth and sixth rounds by connecting with big power shots.

With two rounds remaining, Scotney reverted to form and attacked with her quick shots and out-landed Cantos to win convincingly. She’s definitely a super bantamweight to watch.