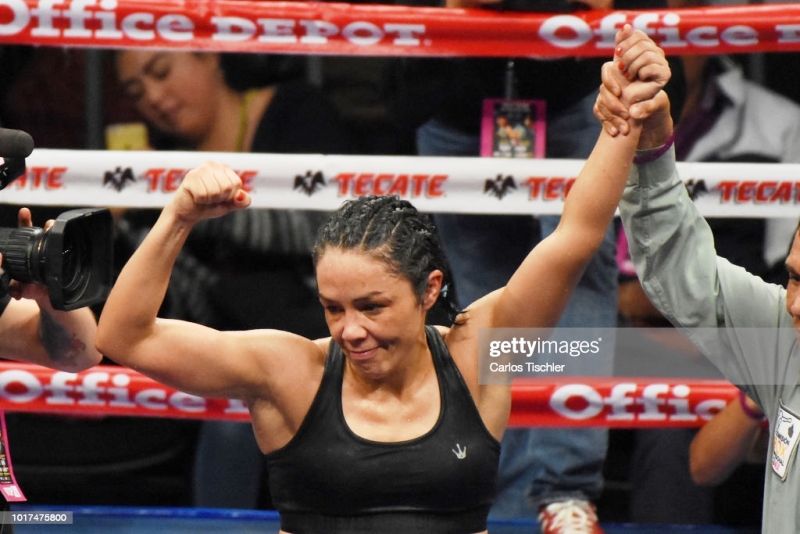 TIJUANA, Mexico-In the history of boxing, there are many fights that happened later than they should have. Tonight’s main event from the jam-packed Auditorio Municipal in Tijuana, Mexico, falls in that category.  Nobody will ever know what the result would have been if these two warriors would have met at the prime of their careers but tonight Jackie Nava (39-4-4, 16KO) captures the symbolic vacant WBC Diamond super bantamweight title with a lopsided and dominating 10-round unanimous decision over the also legendary Mariana “Barbie” Juarez (55-11-4, 19KO).  The official scorecards were 100-90, 99-91 and 97-93.

The event was presented by Zanfer Promotions and broadcast live in Mexico by the Azteca channel and by Space in the rest of Latin America.

Both 41 years old, Juarez had seen slightly more action than Nava coming into this fight.  While Juarez of Mexico City has gone 8-1 in nine fights since the start of 2018, Tijuana’s Nava’s record is 5-0-1, 2KO, during the same period.  During that time Juarez’s opposition has been slightly better as she defended her WBC bantamweight title against the likes of Gabriel Bouvier, Terumi Nuki, Susie Ramadan, Diana Fernandez and Carolina Duer among a few others, Nava’s list of recent opposition are more unknowns than knowns.

Nava’s biggest win in the last three years has been in her last fight against Karina Fernandez.  Her most telling fight in the last 36 months is the rematch against Argentina’s Marcela “Tigresa” Acuña back in the summer of 2019.  After ten competitive rounds, many believe Acuña pulled off a second win over Nava, the first back in 2009 in Buenos Aires for the WBC 112-pound title.  Instead, the three judges saw it majority decision draw.

As for Juarez, the only blemish in her record was a big one.  She lost her last world title against Yulihan Luna nearly exactly a year ago via a lopsided unanimous decision.  It was so lopsided, only one judge gave her one round while the other two scored it a shut out for Luna.

Juarez took such a severe beating, she immediately accused Luna of tampering with her gloves, an allegation which was never proven.

“It was about three years that we have been in talks for this fight,” Nava said seconds before the fight.  “I am happy, I am ready for the fight and I am glad it is finally here.”

Despite the wait by not only the fighters but also the fans, the fight was not as competitive as expected with Nava handing out a one-sided beat down.

The atmosphere was electric as the bell rang to announce the first round with both shooting out jabs looking to gauge distance and speed.  Surprisingly the first stanza was mostly one of study until the last seconds of the round when Nava shoots and scores with a three-punch combo that lands.

The action ramped up in the second round with the former multi-time world champion Juarez pushing forward with straight punches.  Soon it was evident the superior hand speed of Nava as she easily countered Juarez with a body and head attack.

Nava, also a former champion in multiple divisions, kept attacking with feints, quicker hands and effective combinations to the body and head despite developing a nosebleed midway thru the third.  Juarez looked out of whack while she looked to at least land a series of jabs still trying to set up a game plan.

Halfway through the fight Nava looked spectacular, fast, agile and strong, ten years younger.  Soon every time she would catch Juarez coming in with combinations, it was evident she would hurt the Mexico City fighter as Juarez would take a couple of steps back to compose herself.

By the 6th round there wasn’t anything Juarez could do to get back into the fight.  Juarez did begin to get a bit busier and throw more punches but that only led for her to get punched even more.  Near the end of the round Juarez complained of a head butt to the nose and was checked by the ringside doctor but was allowed to continue.

Despite getting beaten to the punch time and time again and at times taking steps back to recoup after receiving hard combinations, Juarez never looked seriously hurt as it seemed Nava’s attack was more of quicker arm punches and not anything solid.

Juarez kept looking for the fight and began to attack the body in the eighth and caught Nava retreating and landed a hard straight right hand.  By then Juarez had no steam left and it was only a battle with herself to make it to the final bell as her face began to show the wear of Nava’s combinations.

In the last couple of rounds Juarez had nothing left and only looked to score with one big punch that never came.

“I am very happy, we knew she was a tough fighter,” Nava said directly after the fight.  “Her jab began to complicate things for me a bit but we were able to counter that with speed.  We knew she made her camp in the mountains of central Mexico so we knew she would have a lot of condition.”

“We looked to be the busier of the two and to be faster,” she continued.  “The strategy worked.  I don’t know if this is my last fight or my second to last fight, I know the end is near, we will see what comes next but now I just want to rest and to celebrate with my team.”