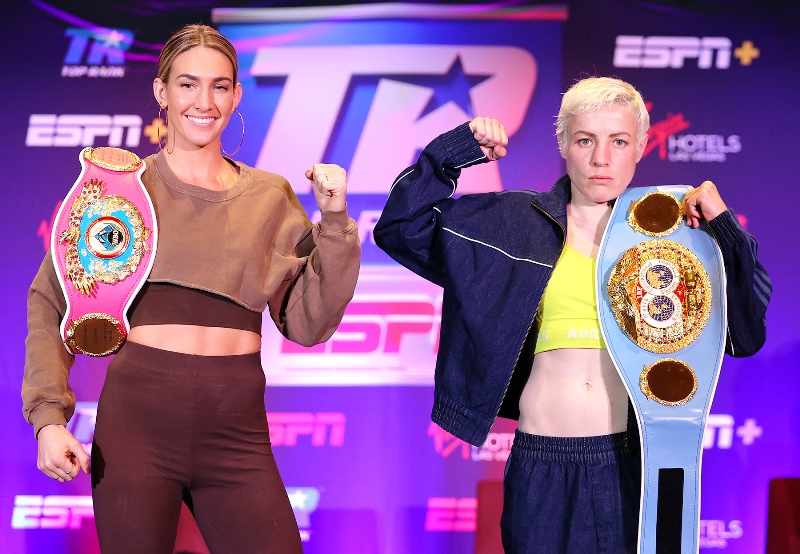 Mikaela Mayer vs Maiva Hamadouche in Las Vegas on Friday

Despite having laced up gloves for nearly 15 years now, current WBO super featherweight champion Mikaela Mayer (15-0, 5KO) still feels she is walking into the unknown when it comes to her boxing career.

She will take another unprecedented step, at least for her, this coming Friday, November 5th, when she will look to unify her world title against France’s IBF world champion Maiva Hamadouche (22-1, 18KO) at the Virgin Hotels Las Vegas, NV, and live on ESPN+.

“Nothing could have really surprised me because I didn’t know what to expect,” she answered when asked in an exclusive interview with the 2-Min Round, the all-female boxing podcast.  “There was no path to follow, there wasn’t a blueprint of how to become an Olympian or a world champion.  We weren’t allowed to be in the Olympics when I started.  All I had was a passion and drive.  I knew I wanted to be a great fighter and that is it.”

After a very successful amateur career Mayer went pro under the Top Rank banner in the summer of 2017.  As the only woman currently signed to the legendary company based out Las Vegas, NV, Mayer has been kept relatively busy while ascending the ranks.

She attributes much of her success to having a great coach, in her case Mr. Al Mitchell.

Recently the super featherweight division in women’s boxing has been the talk of the town.  Considered the most competitive at the moment, the potential of making meaningful fights at the 130-pound weight limit has kept boxing fans salivating.  It was expected while Mayer faced off against Hamadouche, WBC world champion Terri Harper would go after WBA queen Hyun Mi Choi.

Instead, Harper is coming off yet another hand injury to go against American Alycia Hamadouche later this year.

“I was confused of why she is not fighting Choi,” Mayer said somewhat annoyed.  “I am little bummed out because I fight Hamadouche, she can fight Choi and I would have one more fight at 130 to be undisputed and then I just could move on but that doesn’t seem like the case.”

In Hamadouche, Mayer will find herself with a very aggressive experienced European fighter whose only loss has been at the fists of another former world champion in Delfine Persoon.

“Her record speaks for itself,” she said respectfully.  “She is an aggressive style fighter; she comes straight at you.  On the plus side, it is a pretty easy style to train for.  We know exactly what she is going to do, there is no suspense.  She does one thing and she does it well.  Since we know that, we are able to train for that style.”

“She is a bit careless coming in,” she continued.  “She runs into a lot of shots.  I think a lot of her stoppages are from overwhelming these girls, they have not been able to handle that type of pressure.  We are training for that style.  I just don’t see her running through me, I see her running into some big shots.”

“We studied her, we know what she likes to do,” Mayer continued about Hamadouche.  “We know the combinations that she throws.  She doesn’t have much of a jab, she doesn’t use her jab at all.  That is not going to be good for her. She is very short.  She has a good right hand and she follows up with her hook, she does that with everybody.  We know what to expect.  We have worked on some specific things without giving up too much.”

As she gives her assessment on her next opponent, Mayer gives her opinion on the rest of the world level panorama in her division.

“I think Choi and Harper are going to be an evenly matched fight,” Mayer stated.  “I haven’t seen much of Choi but she definitely lets her hands go.  Both are of similar height, they both like to box, both let their hands go, so I think there is going to be a lot of exchanges. Both don’t really know how to fight on the inside so they might get tangled up.  I am looking towards that fight.”

“As much beef I’ve had with Terri Harper, I am rooting for her,” she stated surprisingly.  “I want her to beat Baumgardner, I want to beat Hamadouche, and I want us to have that fight the fans want to see.”

To listen to the full unedited interview, please visit BlogTalkRadio.com/2MinRound