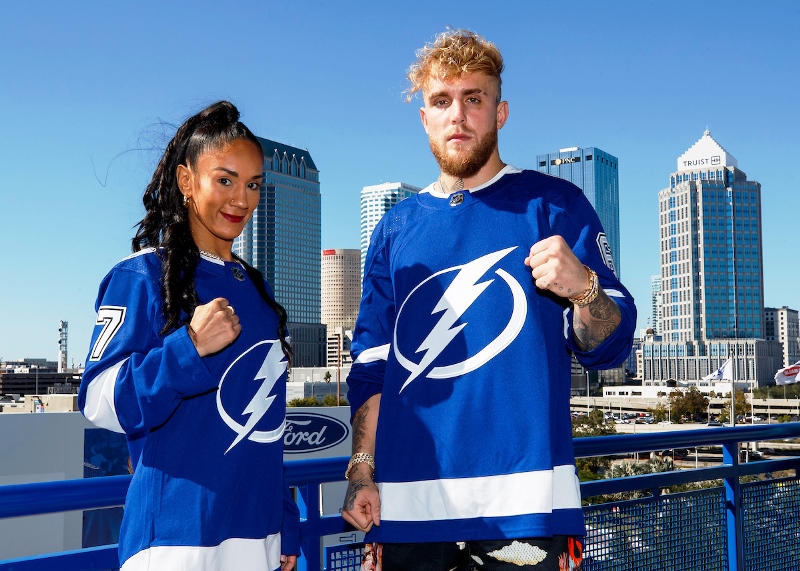 Brooklyn’s finest and perhaps the world’s, Amanda “The Real Deal” Serrano will meet Spain’s Miriam Gutierrez in a lightweight clash on December 18; it was announced on Monday by Jake Paul and Nakisa Bidarian’s Most Valuable Promotions

“Miriam is an extremely tough opponent, with her only loss coming to one of the best pound-for-pound fighters in the world,” said Serrano about Gutierrez. “I am looking forward to stepping in the ring with her and proving why I am at the top of women’s boxing.”

The hard-hitting Serrano (41-1-1, 30 KOs) seeks to vanquish Spain’s number one lightweight Gutierrez (14-1, 6 KOs) on December 18, to prove where she ranks with future superstar foe Katie Taylor.

It’s the co-feature along with popular Jake Paul facing Tommy Fury in a cruiserweight clash at the Amalie Arena in Tampa Bay, Florida. Both fights will be televised on Showtime pay-per-view live.

Paul was in Las Vegas this past weekend for the Saul “Canelo” Alvarez victory over Caleb Plant to claim the undisputed super middleweight status, the top male fighter pound for pound and the number one boxing attraction in the world. Paul said that his last fight card along with Serrano puts them as this year’s second biggest attraction.

Serrano, a record seven-division world titlist in boxing, was unable to make the Las Vegas press conference due to training. Though she was in previous pursuit of a featherweight undisputed status, she is willing to move up to the lightweight division to first fight Gutierrez, then fight Taylor.

“Amanda Serrano is an icon in the sport and when I step into that ring on December 18, it will be a pivotal moment in my career. I respect what she does, but it’s a risk coming up to 135. I’ve been competing at this level for most of my career and the competition is tough,” said Gutiérrez who fought and lost by decision to Taylor last November 2020.

Paul, who promotes Serrano, chose the brunette prizefighter because of her incredible abilities and he wants to assist in advancing women’s prizefighting to another level.

“The simple fact she is the GWOAT. No debating that,” said Paul at the press conference in Las Vegas. “She needs to be put on a bigger platform.”

A win over Gutierrez catapults Serrano to a future clash with Katie Taylor.

“I’m taking a risk by moving up in weight. In women’s boxing, we have to go to where the opportunities are and I want to be able to do things that not every girl can do. And that’s win multiple divisions in different ways from 140 all the way down to 115,” said Serrano. “I know that if my record is ever broken, which I don’t think it will, it won’t be done the way that I did it.”

Now that Mikaela Mayer has passed the hurdle posed by France’s Maiva Hamadouche, it’s now up to England’s Terri Harper and America’s Alycia Baumgardner on Saturday Nov. 13, in Sheffield, England. DAZN will stream the card.

Harper, the WBC titlist, faces Baumgardner to decide who moves on with the super featherweight tournament. It was supposed to be Korea’s Hyun Mi Choi but injuries to Harper postponed the fight and Choi went in another direction. Baumgardner is a true threat.

WBO bantamweight world titlist Dina Thorslund (16-0) meets Mexico’s Zulina Munoz (53-3-2) on Saturday Nov. 13, in a 10-round battle for the WBO world title at Kolding, Denmark. This will be her first defense of the title she won by defeating another Mexican fighter Jasseth Noriega this past June.

Mexico City’s Lourdes Juarez is making the second defense of the title she took from Guadalupe Martinez a year ago. Once again she fights another Mexican super flyweight in Aguilar who is 19 years-old and fights out of Oaxaca.

Carisse Brown (5-1) won by technical knockout in the second round over Haidde Zapa (3-8) on Saturday Nov. 6. The lightweight fight was held in Tulua.

Clothilde Del Ben (1-0) won by decision after four rounds versus Angela Cannizzaro (6-12-1) on Saturday Nov. 6. The bantamweight fight was held at Marne.

Ching Hsin Wang (2-1-1) and Chian Huei Chin (0-2-1) fought to a split draw after four rounds on Saturday Nov. 6. The flyweight match was held in Taipei.

(Photo by Matt May)