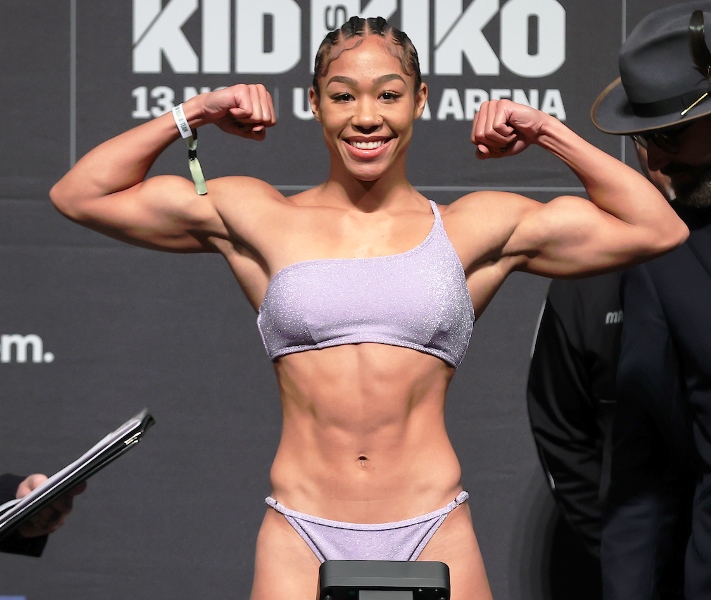 When it comes to world championship fights most American men have never competed or defended on British shores. American women like Alycia Baumgardner, on the other hand, are almost eager to take up the challenge.

“The opportunity came and we took it. It doesn’t bother me that we have to go over there,” said Baumgardner.

It was supposed to be Korea’s Hyun Mi Choi facing Harper, but arm injuries to Harper twice scuttled the fight. Choi made other arrangements. That left an opening for Baumgardner who lobbied for the fight.

“I was writing Eddie Hearn about fighting one of his champions. So, it ended up coming to light and now were here,” Baumgardner said.

It’s been a long road for the Ohio native who now trains in Detroit, Michigan.

Though she has never fought more than eight rounds or against European fighters, she has an extensive amateur career against many of the best America has to offer. She hungers for the elite competition offered in Europe.

“But just the experience you have in the amateurs, having over 100 fights, I would say that’s credible and that experience speaks for itself,” said Baumgardner who has fought professionally for four years.

The only loss on her resume was against Christina Linardatou who would later win the WBO super featherweight title. Since that loss by split decision, the 27-year-old known as “the Bomb” has remained unbeaten.

Always an athlete, Baumgardner has been eager to return to the prize ring in pursuit of a world title. For a brief while she was recovering from surgery and during that inactivity she worked as a model and traveled to places like Los Angeles.

“But definitely I’m an athlete first. Boxing is an entertainment sport. This just adds another touch on my resume,” said Baumgardner. “I was Prospect of the Year at one time in Ring Magazine.”

She is eager to prove the magazine prediction accurate.

The very capable champion Terri Harper stands in the way.

“What I know is she’s a champion. She has some skills. And nothing that I’m worried about. I don’t see much into her. Only what she shows,” said Baumgardner of the champion Harper.

Harper has defended the titles four times. This is her first time encountering an American challenger.

“I’ve never shied away from a tough fight,” said Harper who has been inactive for over a year. “I’ve fought girls with winning records, former world champions, that’s the reason we chose Alycia. She’s a tough and respectable opponent.”

“This is technically my first championship fight, but this is nothing new. Boxing has been my whole life,” said Baumgardner. “As an athlete and for someone who’s asked for challenges, going in her backyard and taking the belt would be even more satisfying to me. So that’s what we’re going to do.”

For the past two years she’s openly challenged all of the titleholders in the super featherweight division. Finally, her opportunity has arrived.

“I feel like the sport of boxing needs exciting fights. I’m all for fighting. We train all year round to be ready. I’d rather have a fight. That’s why I push and hope to get those fights,” she said.