Fighter of the Year 2021: Seniesa Estrada
Written by: David A. Avila 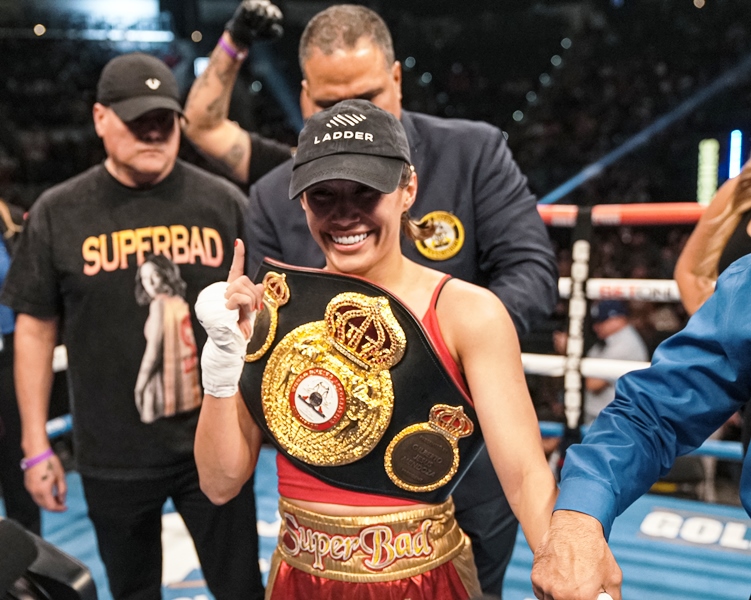 Our Fighter of the Year is Seniesa Estrada, Plus Other Award Winners

By the Prizefighters staff

It was a year that saw the best of the best tangle with each other until the final months, final weeks and final days of 2021. We saw Katie Taylor, Chantelle Cameron and Kali Reis all perform their fighting skills against the very best in pursuit of excellence.

We also saw several fighters like Mikaela Mayer and Maiva Hamadouche tangle with other world titlists attempting to gain undisputed status as the actual world champion in their respective divisions.

This year several truly stood out, but one petite fighter at 105 pounds shined more than the others and that was Seniesa Estrada.

Fighter of the Year

Seniesa “Super Bad” Estrada is our Fighter of the Year in 2021. The vibrant pugilist from East Los Angeles began the year by taking the WBA minimumweight title from Anabel “Avispa” Ortiz. She then moved up in weight and tangled with Japan’s dangerous Tsunami Tenkai and took the WBO light flyweight title. Finally, a few days ago, she delivered a riveting knockout win over undefeated Maria Santizo in San Antonio. It was one crackling ending to a furtive year for Estrada and hard to overlook.

It began last March when she challenged Mexico’s Ortiz for the WBA minimumweight title that the Mexico City had defended successfully in 12 consecutive bouts since 2013. For years Seniesa Estrada had fought as high as 113 pounds by disguising her weight, but when she actually dropped down to her natural weight class the East L.A. fighter proved devastating.

In July, Estrada then moved up a weight division to show her abilities by challenging Japan’s talented Tsunami Tenkai in front of a large outdoor crowd in Los Angeles. In one of the best fights of the year Estrada outslugged the very impressive Tenkai and won by a decision that was closer than the judge’s scores. But impressive none the less.

This past weekend Estrada closed the year with a riveting knockout win that proved once again she has knockout power and star power too. It was her seventh knockout in 10 fights and another highlight win for the East L.A. prizefighter.

Others to consider this year were Amanda Serrano who shined with three impressive wins in defeating two world champions and then moving up to lightweight and beating Miriam Gutierrez. Chantelle Cameron was another to consider after she stopped former great Melissa Hernandez and beat Mary McGee to unify two titles at super lightweight. There was also Mikaela Mayer who beat Erica Farias and then slugged it out with Maiva Hamadouche to unify two titles at super featherweight. And Mexico’s Lourdes Juarez easily defended the super flyweight title twice in Mexico. Denmark’s Dina Thorslund also impressed when she dropped down to bantamweight and won the WBO title with two solid performances including a knockout win.

But it was difficult to overlook Seniesa Estrada who not only defeated two very respected world champions, she dominated with her combination of speed, power and charisma that has made her a tremendous draw wherever she fights. Whether its in her hometown Los Angeles or in San Antonio, Texas the fans were eager to see her perform her electric style.

Now, if only she could be allowed to fight three-minute rounds. That’s one of her goals.

Seniesa Estrada wins our Best Fighter of the Year in 2021.

Fight of the Year

Mikaela Mayer vs Maiva Hamadouche pit two super featherweight world titlists who had battled on social media for more than a year. When they finally met in Las Vegas this past November, it was not to meet for tea. Mayer and Hamadouche tore into each other with a ferocity seldom seen though the scores didn’t reflect the actual fight. It was one heck of a fight and those in attendance left the arena in awe. We can still hear the echoes of the punches landed by both fighters. It left us awestruck.

KO of the Year

Alycia Baumgardner traveled to England and promptly knocked out WBC super featherweight titlist Terri Harper with a single right that paralyzed the champion and rendered her helpless on her feet. If not for the quick reactions of referee Mark Lyson it could have been disastrous. Baumgardner had predicted devastation and showed her right-handed power to be a weapon of destruction.

Baumgardner’s win gives her the KO of the Year.

Breakout Star of the Year

Ebanie Bridges was known on social media, but inside the prize ring she was thought to be a patsy for whoever needed an easy win. Well, that was dispelled quickly when the Aussie school teacher met then WBA bantamweight titlist Shannon Courtenay and turned into a wildcat. If not for a hand injury midway through their world title fight, Bridges might have wrested the title away. Still, with a broken hand the Aussie from New South Wales fought 10 hard rounds with an injury. Bridges proved to be a warrior and gate attraction wherever she fights. She’s also our newcomer of the year to the big time.

Upset of the Year

Mexico’s Erika Cruz pulled off the biggest upset when she defeated Canada’s Jelena Mrdjenovich to take the WBA featherweight title from the future hall of fame fighter. The Mexican southpaw was a late replacement and shocked the boxing world with her win that took place at West Point in New York and was televised nationally.

Layla McCarter once again wins this category. The fighter from Las Vegas can compete with lightweights to super welterweights and yet cannot get a world title fight. Partly because of McCarter’s own fault, but still the question is why can’t one of the best fighters pound for pound get a fight? McCarter has not lost since 2007 and defeated a light heavyweight by knockout this past summer though it does not show up on boxing registers.  It can be found on Youtube.com. There seems to be a conspiracy afoot.

Runner up: Mexico’s Kenia Enriquez. The number one ranked light flyweight was avoided by all world titleholders for four consecutive years. Sadly, she may be forced to move up in weight after failing to make 108 last month.

Comeback of the Year

Naoko Fujioka wins this year’s award for coming back into the public eye with a riveting performance against Sulem Urbina. The five-division world titlist was forced to dig deep to find a way to overcome the brilliant display of boxing by Arizona’s Urbina and defend the WBA flyweight title. The two battled back and forth in Los Angeles and gave the large crowd one of the best fights of the summer. Fujioka, now 46, proved why she still belongs among the best fighters pound for pound in the world. Urbina also showed she will become a world champion soon.

Kali Reis won the WBA and IBO super lightweight titles and took part in one of the top fights of the year. She also spent time in performing in an independent film and talking about Native American causes. She was a one-woman army in 2021. Cheers to the champion in boxing and in life. Runner up: Jackie Nava.

Sulem Urbina nearly toppled the reign of five-division world champion Naoko Fujioka in a riveting performance in Los Angeles. Though she lost by majority decision Urbina showed she has plenty of talent and can compete with the best in the world in the flyweight or super flyweight division. Arizona has a real fighter in Urbina. Runner up: Mikayla Nebel. Based in Las Vegas she has talent and fights only the best.

Melissa Hernandez proved that anytime she’s in a prize ring something exciting is going to happen. She lost to Chantelle Cameron in a fight stopped too quickly and looked to be heating up. Hernandez has long been one of the more skilled fighters in the sport and willing to entertain the fans at the same time.