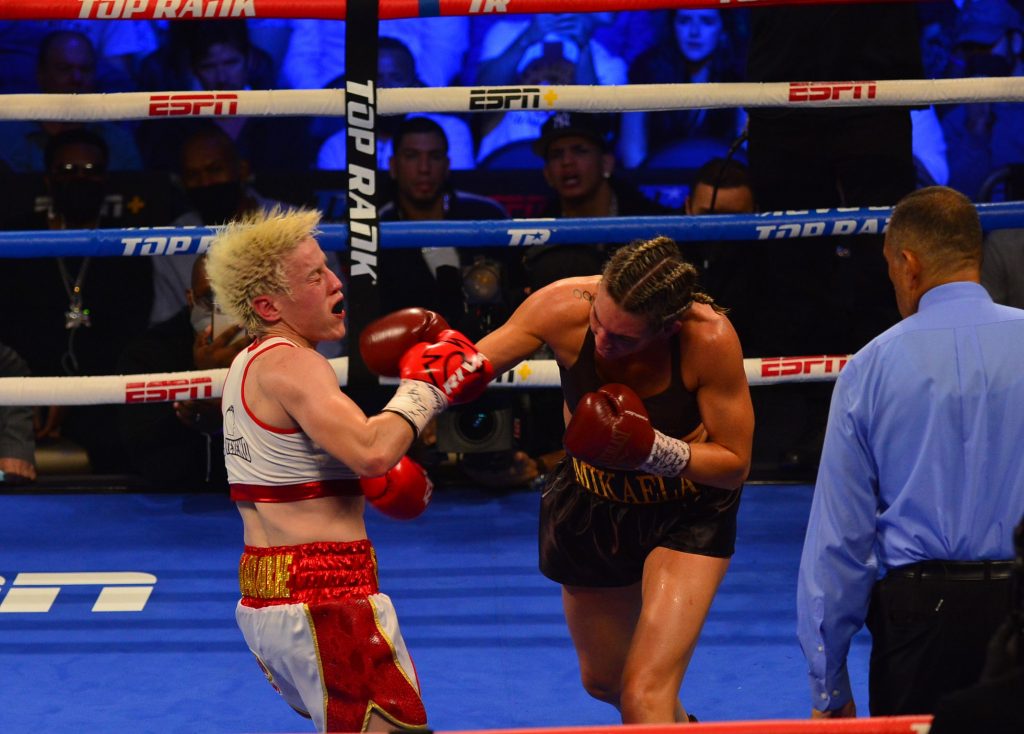 With 2022 nearly upon us but a new variation of the virus knocking on the door, the future of boxing, as far as with fans, is a bit uncertain.  With that said, we must be optimistic so here is a list of the top 10 female fights we look forward to being made in the next 12 months.

The order is from the lightest to heavier weights.

Seniesa Estrada (22-0, 9KO) vs Yokasta Valle (23-2, 9KO) Strawweights – Both are champions and both have mentioned they want this fight soon. The question is where? Obviously, the money is in the United States on a Golden Boy Promotions but Valle is a bona fide star in her native Costa Rica so the unification fight there would be much bigger than in the US.  Is Estrada ready to be a true world champion and go to Valle’s backyard?

Marlen Esparza (11-1, 1KO) vs Naoko Fujioka (19-2-1, 7KO) Flyweights – Another possible unification fight under the Golden Boy Promotions banner but with this one there is no question of where it needs to be held.  Fujioka recently achieved her lifelong dream of fighting in the United States but the winner of this fight will be cemented as the one to beat at 112 pounds.

Lourdes Juarez (33-2, 4KO) vs Adelaida Ruiz (10-0-1, 5KO) Super Flyweights – Juarez, the younger sister of legendary “Barbie”, has really shown she is world class level since capturing the WBC title last year.  The hard-hitting Ruiz challenged for the interim title earlier this year but it was ruled a no-contest versus Sonia Osorio but she more than deserves her shot against the full-fledged green and gold queen.  Will Juarez accept the challenge?

Yulihan Luna (22-3-1, 4KO) vs Jackie Nava (39-4-4, 16KO) Bantamweights – Luna jumped onto the world scene by completely annihilating Mariana Juarez on Halloween of ’20.  Since then Luna has disappeared despite fighting twice in non-title affairs.  Nava, a legend in her native México, recognizes she is nearly at the end of her career but does want one last run at a title.  Her last showing, a masterful display of boxing against Juarez, showed she still has it.

Mikaela Mayer (16-0, 5KO) vs Alycia Baumgardner (11-1, 7KO) Super Featherweights – If their pending fight is as half as good as their exchanges on social media, we are in for a treat.  Baumgardner upset the apple cart with the knockout of the year and now is a player at 130 pounds with Mayer one of the most popular American female fighters of the moment.  Two Americans world champions facing each other on a major platform would be a huge step for the sport in the United States.

Katie Taylor (20-0, 6KO) vs Amanda Serrano (42-1-1, 30KO) Lightweights – We have already lost count how many times we’ve asked for this fight throughout the years.  We came close when Serrano signed a deal with DAZN, the media network Taylor fights on, but it didn’t happen.  With Serrano making the jump once again to 135 pounds and with both of them fighting different opponents a week apart, at least the schedule is lining up for 2022.

Chantelle Cameron (15-0, 8KO) vs Kali Reis (19-7-1, 5KO) Super Lightweights – This fight is a given since it is the culmination of the Matchroom Boxing tourney at 140 pounds.  Does not change the fact we want to see it.  Cameron has become one of the most exciting female fighters on the scene and Reis is a tried-and-true veteran.  The fact Reis hasn’t looked her best in her last two outings makes the fight even more interesting.  Expect it in the first quarter of 2022.  The winner will be the undisputed ruler of the division.

Mary McGee (27-4, 15KO) vs Jessica Camara (8-3) Super Lightweights – This matchup is not as of high profile as the rest on the list but it is here on its purely entertainment value.  McGee has paid her dues but came up short against Chantelle Cameron giving up her IBF title in the 140-pound tourney.  Camara did the same in her challenge for the WBA and the vacant WBO title against Kali Reis.  Both put up a valiant effort and not only deserve another shot at the world stage but their styles mesh to give us a great fight.

Jessica McCaskill (11-2, 4KO) vs Alma Ibarra (9-1, 4KO) Welterweights – With two wins over the legendary Cecilia Braekhus and scoring all the titles at 147 pounds, McCaskill has turned into a major player in the current world female boxing scene.  Thing is, she seems to be looking for the big money fight in a rematch against Katie Taylor instead of mentioning her mandatory challenger for the WBA belt, Mexico’s Ibarra.  Ibarra won the opportunity for the title by beating Kandi Wyatt earlier this year, the same opponent McCaskill stopped in her last outing.  If we follow the rules, McCaskill should face Ibarra before she meets Taylor again.

Raquel Miller (11-0, 4KO) vs Maricela Cornejo (14-5, 5KO) Middleweights – Here is another fight we will not stop from including to put on this list until it happens. It is not a world title fight or of high-profile status, but it pits two names of the division against each other. The winner goes up perhaps to a world title fight, while the loser must decide if boxing is for her.