A Look Back at Women’s Boxing’s Bonanza in 2021
Written by: David A. Avila 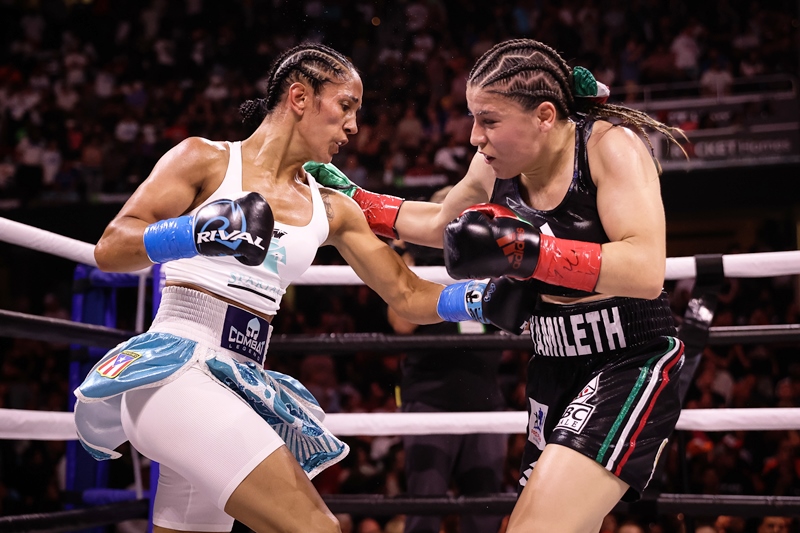 Prizefighting in the women’s fight world accelerated to heights never reached before these past 12 months.

My personal coverage of women’s prizefighting began in the mid-1990s and the sport had already existed many decades, and it is safe to say no other era could boast the number of significant fights that took place in 2021.

It was on fire.

Female prizefighting exploded with so many pivotal performances and confrontations that we are forced to break it into two parts:

The year 2021 was already three months in when Claressa Shields led the way in a unification match with Canada’s Marie Eve Dicaire for the undisputed super welterweight championship. The Canadian fighter put up a brave performance on March 5 and refused to quit, but Shields proved just why many consider her the best of the best and won her second undisputed world championship.

On that same card held in Flint, Michigan, another Olympian Marlen Esparza jumped in to replace a fighter against Shelly Barnett at the last-minute. It helped salvage the pay-per-view card and proved that real fighters don’t need three months to prepare.

A mere five days later, on March 25, Amanda Serrano and Daniela Bermudez met on the island of Puerto Rico for three featherweight world titles. It was a battle between two fighters who ranked high on most pound for pound lists. A fierce battle commenced between an American and Argentine fighter not accustomed to moving backward. Serrano proved dominant and ended the match in the eighth round with an emphatic knockout via body shot. Bermudez was left helpless on the floor unable to continue. Brooklyn’s Serrano was able to show her explosive talent against a formidable foe. The boxing world was in awe.

Spring nearly brought the boxing world an upset when England’s Shannon Courtenay fought relatively unknown Ebanie Bridges for the WBA bantamweight title in England. The Aussie shocked Courtenay and those watching around the world with her ability to trade blow for blow with the powerful British champion. Though Bridges lost the battle, she’s won the war in the eyes of the public and remains a gate attraction and someone to watch compete.

In late April, at the US Military Academy at West Point, New York, longtime featherweight world titlist Jelena Mrdjenovich of Canada met Mexico’s Erika Cruz on April 22. It was televised internationally and quickly evident that the Mexican southpaw was able to consistently score with an aggressive attack that Mrdjenovich was unable to squash. An accidental clash of heads caused a cut on the Canadian fighter and during the seventh round the fight was stopped. Cruz won a technical decision on all three judge’s score cards and grabbed the WBA featherweight title. It was the Upset of the Year for this publication.

Ireland’s Katie Taylor returned on May Day and won a close decision against Natasha Jonas according to the judges in Manchester, England. Taylor continues to fight whoever fans want to see her fight. She also continues to bring attention to women’s prizefighting with ever-expanding popularity. Taylor has been a savior for the sport and remains a tremendous fan-friendly fighter. She’s continues to add more elements to her fight arsenal and is the highest paid woman pugilist on the planet.

Canada’s Jessica Camara introduced her talent with a surprising win over former featherweight champion Heather Hardy on May 14. After suffering an early knockdown, Camara rallied and won a hard-earned decision after eight rounds in a lightweight fight.

England’s Chantelle Cameron had been handily defeating so-so competition from South America and Europe. In late May, Cameron met American fighter Melissa Hernandez a very clever and strong former champion and overwhelmed her with blows. Though the referee in Las Vegas seemed to end the fight too early, Cameron looked strong in winning by technical knockout in their super lightweight showdown. It was impressive.

Mikaela Mayer was eager to unify the super featherweight division but the Olympics kept that from happening. She opted to fight former world champion Erica Farias and out-slugged the strong fighter from Argentina. It was Mayer’s first defense of the WBO world title and it took place in Las Vegas on June 19.

Marlen Esparza returned on June 19, to face Mexico’s multi-division world champion Ibeth Zamora for the WBC flyweight title in El Paso, Texas. The 2012 Olympic bronze medalist survived an early knockdown and used her speed and skills to eke out a victory by decision. It was an impressive performance and Esparza’s first world title.

In Europe, Delfine Persoon also fought and won on July 3. She also lost in amateur competition to qualify for the Olympics. Other major pros losing in amateur fights for Olympic qualification were Christina Hammer, Maiva Hamadouche, and Yesica Bopp.

In the heat of July 9, two world title fights took place in Los Angeles as newly crowned minimumweight champion Seniesa Estrada moved up a weight division to challenge Japan’s talented WBO light flyweight titlist Tsunami Tenkai. After 10 violent rounds Estrada was deemed the winner and now has two titles in two weight divisions. It was nip and tuck but the East L.A. fighter prevailed with her aggressive style.

On the same Los Angeles card, Japan’s great Naoko Fujioka who has won five weight division world titles, met American fighter Sulem Urbina in defense of the WBA flyweight world title. The fight changed momentum back and forth with Fujioka winning by majority decision in a strategic and entertaining clash.

Mexico’s Lourdes “La Pequena” Juarez defended the WBC super flyweight title against fellow Mexican Diana “La Bonita” Fernandez on July 16 at Ciudad Juarez. It was the second time facing Fernandez and second time in Juarez. Once again Juarez proved superior with her boxing skills and despite one bad judge, was able to win again by split decision. It was Juarez first title defense.

Saowaluk Jiamthong (1-0) won by technical knockout of Wiraphon Ketunarong (4-2) in the third round on Monday Dec. 27. The super flyweight bout was held at Pathum Thani. Also, Sothita Sitthichai (1-0) knocked out Panumars Bubpamalo (0-1) in the third round.