A Guide to Women’s Boxing and More News
Written by: David A. Avila 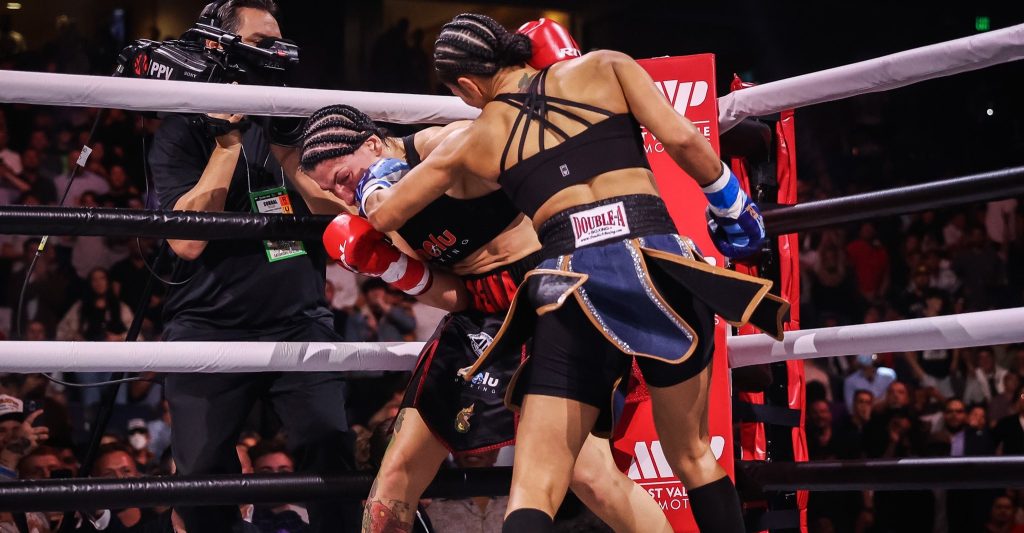 With the advent of women’s boxing in the Olympic Games, a new world of prizefighting has opened up quickly for the female gender who love to fight. That world has grown quickly at a ridiculous speed.

It seems not long ago that any mention of women’s boxing was promptly dismissed by most veteran writers of boxing and the powers behind the sport. Today the naysayers are dwindling like the water drenched wicked witch of the east.

Welcome to a new world of Oz.

Today we have proven ticket-sellers like Katie Taylor, Seniesa Estrada and Mariana Juarez who can fill stadiums with fans eager to see them display their flashing fists. But not all women fighters have reporters following their every step. There are not many old guard journalists that cover women’s prizefighting.

An entirely whole new crop of journalists have slowly emerged and are finding their footing.

Here are a number of those journalists who employ various methods and devices to bring interest to female boxing. They use social media, newspapers, video to bring stories, photos and video content focused on women’s prizefighting. Their numbers are growing.

Aside from www.thePrizefighters.com who are aligned with www.TheSweetScience.com and www.BoxingChannel.com other web sites include women’s boxing coverage such as www.BoxingScene.com and www.FightNews.com . Another web site that includes some female boxing is www.Maxboxing.com. Kevin Iole of Yahoo.com has also long covered women’s combat sports.

One web site that precedes them all is www.womenboxing.com or WBAN as its commonly known. Sue Fox, a former pro fighter, owns and operates the site that only writes about amateur and pro women’s boxing. For more than 22 years WBAN has served the purpose of crusading for women’s boxing. Fox also heads the International Women’s Boxing Hall of Fame. Without her dogged determination to keep women’s boxing relevant, I doubt that the sport would have survived. WBAN has videos, archives and notices weekly. It’s the oldest and much respected of all the sites.

Digital and hard copy magazines like Ring Magazine also have coverage of women’s boxing. ESPN.Com has stories on women’s boxing but not as much as those outlets mentioned before. In England there is Linealboxingchampion.com. which devotes is much to women as it does to men’s boxing.

Several years ago, the Riverside Press-Enterprise and La Prensa newspaper in California had extensive coverage of women’s and men’s boxing. But that changed when a new owner bought all of the newspapers except the Los Angeles Times. Those newspaper groups seldom if ever mention women’s boxing.

Instagram has become the social media site preferred by many and has brought daily pictorial coverage of women’s boxing. Foremost has been Women’s Fight News based in United Kingdom, they never fail to showcase women’s boxing and also have a Youtube.com channel by the same name that produces a weekly roundup of female fight action around the world. Excellent stuff.

Supremeboxing is a Los Angeles-based group that also covers men and women’s boxing but mostly in Southern California, Nevada and Mexico on Instagram. They also have a YouTube.com channel of the same name and are affiliated with the WBC.

ESNews with Elie Seckbach always devotes time and space to women’s boxing. The offbeat reporting of Seckbach has a large following and no one covers the sport like he does. One day he’s in New York, the next day he’s in Los Angeles like a whirling top. He is most often more famous than the fighters he covers. But Seckbach, based in L.A. has his finger on the pulse of boxing whether its men or women. You can find ESNews on Instagram, Twitter or Youtube.com.

Podcasts have popped up everywhere. 2-Min Round: Hooks and Jabs on the Female Fight World has a bi-weekly show on Thursday that originated in 2016. Their guests include world champions, contenders, managers and promoters of the women’s boxing world like Claressa Shields, Amanda Serrano and Layla McCarter. Other podcasts are emerging in Canada, England and Mexico. Some use visual devices and others are only on audio and can be found on almost all social media sites.

Of course, there are individuals who write on women’s boxing like Malissa Smith whose book the “History of Women’s Boxing” is a must read for anyone covering the sport. There’s also Mary Ann Owen, a photographer and historian based in Las Vegas, whose extensive photos of pro women boxing remain the only proof of fights that took place in the 1990s and early 2000s. Many of those fights that took place in that era were not reported. There are a few photographers who followed Owen’s lead like Al Applerose who were the only photographers who snapped photos of women’s action while the other photographers ignored the female fighters. Very few photos of fighters from the early 2000s exist. It’s rare to see fight photos of Melinda Cooper, Vaia Zaganas and Chevelle Hallback.

Others like Lupi Gutierrez, Rick Faris, Blanca Gutierrez, Felipe Leon, Tom Gerbasi and Yuriko Miyata have also contributed in whatever way they could all over the world. From the 1990s until now I’ve witnessed the growth and expect it to grow even faster and larger. Women’s boxing will be equal to men in all ways including financially. It’s just a matter of time.

If you desire to find out what is happening in women’s professional boxing, these aforementioned sites and people are the places to find it. Enjoy.

Evelin Bermudez (15-0-1) won by technical knockout of Yaditza Perez (14-14-1) in the third round on Friday Jan. 7. The IBF light flyweight title match was held at Perez, Santa Fe. Also, Roxana Bermudez (4-4-2) defeated Victoria Benavidez (0-3) by decision after six rounds in a flyweight bout.

On Friday Jan. 14, flyweights Gabriela Fundora (4-0) and Nataly Delgado (8-4-1) meet 10 rounds for a regional WBC title at Bella Vista. Fundora fights out of the USA.

(Photo by The Sun)